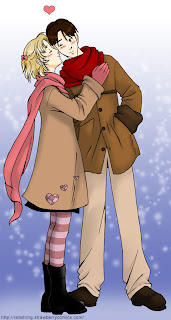 As our blog has been working more and more closely with independent publishers I thought it was about time we spent some time looking at creators who start out self-publishing. Webcomics are becoming more popular these days and are now a legitimate part of the comic book world. Last February Dark Horse picked up publishing the graphic novels for a webcomic called Red String. Gina Biggs, the creator of this story, was kind enough to consent to an interview.

On a more personal note, I was really happy to have this opportunity. Gina had really good timing as far as her responses to my questions. You see, today is my boyfriend and my 6 year anniversary, and Gina was the artist on the artwork I commissioned for an anniversary gift. So hopefully this interview will encourage a few more people to go check out Red String and that will be one of the ways I thank Gina for the lovely art work.

Red String is a manga-style romantic story. I find it rare in American comic books that romance is valued as more than a quick buck (you know... like the Black Canary/Green Arrow wedding hype). Red String is different though. It's a story that shows that there is still love in the world while pulling the reader into the world of Miharu Ogawa and her friends.

On to the interview!


GWEN: Red String is certainly one of the more unique books in the American comic book industry today. With so many comic books getting darker, and so many writers believing that it's a better idea to break up long standing romances in monthly books (such as Spiderman), it's
refreshing to read a story that gains a lot of focus from fighting for love. What inspired Red String's creation?

GINA: I'm flattered. Thank you. Red String grew from my interest in general mythology and my growing interest in Japanese culture (as well as their anime and manga). One of the things I knew I wanted to do with the story is start the main couple off together since I had rarely seen that done in romance comics. It always takes forever for the main couple to get together and when they do get together it's tragedy and angst all the way. I wanted to do something a little more uplifting and relaxed at the start. Of course, as a romantic at heart, fighting for love seems a natural direction for me.


GWEN: I've spent a lot of time exploring your many websites. You obviously enjoy your work. How did you get started making comic books?

GINA: I definitely enjoy it. Art is all I've ever wanted to do. I suppose I got started in comics when I started reading X-men as a teen. I started creating my own mutant characters that have their own universe and adventures. However, I had been writing plays and the like earlier than that. I was always interested in creating stories to share with people.


GWEN: Did you go to school for art or are you self-taught? 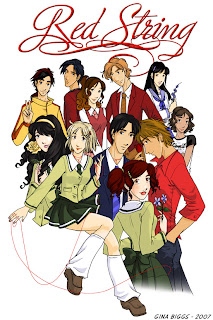 GINA: Self-taught. I had the usual elective art classes in middle school and high school, but nothing special. I almost went to the school of the arts for high school, but things didn't work out there. Plus I was very turned off at their dismissal of "cartoon" art and comic book creation. They told me they would get me out of that... steer me in a different direction. I think by then I knew I wanted to be a comic book artist, so that didn't sit well.


GWEN: What is the hardest thing you've had to learn while creating Red String, and working towards gaining an audience for you story?

GINA: There of lots of things I've had to learn and I always seem to learn the hard way. However, more than pushing myself to do more background in my art or advertising the comic, I think it was finding a balance with the pace. As a webcomic, even with updates three times a week, readers can be impatient for more (I'm the same way), so I try to keep the story going at a fast enough pace. I can't have it dragging, but I have to be careful not to go too fast and skimp on things that need to be drawn out a bit.
As for gaining an audience, I think it's hard all around. Finding the most profitable places to advertise in terms of getting new potential readers to the site, making contacts with other comic creators, traveling about for conventions... it's all a lot of work. It's time-consuming, but it's worth it if it gets my story to more people.


GWEN: I was interested to read in a previous interview that you usually have stories that relate to any characters you draw. Does that apply to background characters as well? Is it difficult to draw a character as scenery? (I know that would be difficult for me, as any character I create when I write has their own story, whether I ever write it down or not.)
GINA: Nah, with the large crowd scenes I'm drawing now-a-days, that would be an absolute nightmare. I'd go insane. However, a lot of times, I try to slip in characters from my other stories or people I know into the backgrounds. The clever eye can usually find them.


GWEN: I had a lot of fun listening to the radio-play of Red String when I discovered it. I thought it was a great addition to your story and allows the book to become interactive. How did you get involved in this project and how far do you plan to go with it? 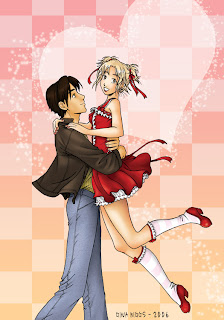 GINA: I was contacted by a reader of the comic, Crystal Miller, who wanted to produce the play. I thought it would be fun and I was able to help decide on the voices. Unfortunately, as happens with a lot of us, real life time consumption took away from time she was able to dedicate to the project. I ended up taking up the reins and producing. It allowed me a certain extra control over the work, what music would go into the scenes, delivery of lines, and the like. Luckily, I have a mixer now as well. I hope to continue on with the play as far as I can, to the end of Red String if at all possible.


GWEN: I'm beginning to see more and more web-based comics showing up as collections on the shelves of local comic book stores (such as Inverloch and Megatokyo). I believe that this has helped to get more people interested in comic books and I feel that it'd be beneficial to store owners and publishers to get behind this market. What would you like to see for Red String (and Strawberry Comics) in the future in regards to a wider market?

GINA: AND Red String. You can find it in books stores as well thanks to the wonderful folks at Dark Horse Comics. As for what I'd like to see, I suppose I'd like to see more marketing for such projects. Get the public more aware that it's not just superheroes anymore. The independent comic scene --webcomics included-- has a lot to offer. Manga has already helped get females into reading comics again, and now we need to let them know there's even more out there.


GWEN: I've read before that you already have the basic story of Red String planned out. Personally I feel that the best stories plan to have an ending (as many ongoing tales lose something after a point). When you reach the end of Red String do you think you'll work on another ongoing web comic, or do you have other projects in mind?

GINA: At this point, it's way more than the basic story planned out. My summaries are getting longer and longer, so a lot of them all I need to do is script them. Though I do change things from time to time, I know my end goal. I definitely plan to do another webcomic after Red String. I have a few stories I am developing and when it gets closer to that time I will hopefully have chosen which one I will pursue and flesh out completely for webcomic form. However, I hope to slip in a lot of other projects along the way, like more of my fairytale series, Erstwhile.


GWEN: Would you ever consider working only as a writer or only as an artist in collaboration with another creator, or do you prefer to work on all sides of the stories yourself?

GINA: I think there are very few people I would feel comfortable working with as only an artist. The communication level has to be very high. I'm not sure I would want to separate myself as a writer only because I tend to see the scenes play out in my head as I write. It would be very strange for me to not allow the images loose on paper myself. 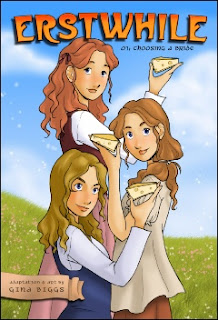 GWEN: What comic books do you read these days? Outside of your own stories, did you ever have a favorite comic book romance?

GINA: I read a great deal of manga titles mainly. A few of the titles include Hana-Kimi, OL Shinkaron, Nodame Cantabile, Absolute Boyfriend, and Yotsuba&!. Anything by Yuu Watase would be on my list. I believe I am currently reading three of her series. I also like various American titles like Blanket and Demo, but I tend to stay away from the superhero genre these days. Admittedly, back in the day my favorite comic couple was Gambit & Rogue. The tension was a killer, but that was my earliest favorite couple. Now-a-days, that's a bit harder because my reading list has expanded greatly, but if I had to narrow it down, it would be Mizuki & Izumi from the series, Hana-Kimi. They provide great tension as a potential couple, but more than that, they really communicate with each other. They're best friends even though they're in love.

Thanks again to Gina for taking the time for this interview. I had a lot of fun with our email conversations, and I plan to stop by and say hello to her at Megacon. I've added a list of links to her various websites and I encourage everyone to take a look!