The Stuff of Legend - Review 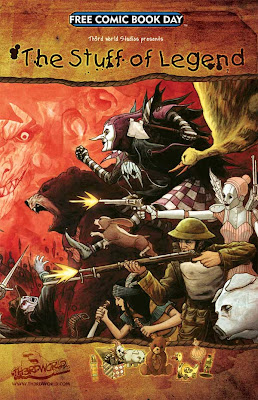 
My first impression on reading this book was that I should have made time to read it sooner. Jim and Thomm did their reviews a week ago but I just got around to reading this fantastic story.

There is little narration at the opening of the book which was a good choice. The bedtime setting does several things for the reader. First of all it draws attention to the simple yet nostalgic pencil work. It's almost a shame that the art will be colored because I'm afraid it will lose some of the more intricate pencil work in the process. Of course the color work on the cover is gorgeous so I probably have nothing to worry about :) As someone who has been through many art classes I am impressed by the shading as it has a soft quality that serves to lull you into the storybook environment. I especially enjoyed the smooth way the artist conveys movement, specifically in the battle scenes. The second effect the bedroom setting creates is a setting which many of us are familiar with (if not from personal experience than from movies and such). By starting everything out at nighttime in the children's bedroom one is reminded of bedtime stories. In evoking that involuntary memory the writer places us in the mindset to experience a bedtime story. He brings us back to childhood which in turn allows us to accept talking stuffed animals going off to fight the boogeyman.

Now that we've been recalled into the realm of childhood stories the characters begin to develop. I've enjoyed reading about the characters that have been introduced so far. I'm especially intrigued by the Princess and the forgotten Native American warriors that seemingly refuse to fight when they see her in the fray. I also like the Jack in a box - even if he's a bit creepy.

I think the thing that really sold me on this story was the idea of the Dark, the place the toys must venture in order to save the Boy from the boogeyman. The idea of a realm of bitter and forgotten toys was a great one. I especially liked how the toys were transformed to become more "real" once they entered the Dark. The teddy bear becomes and actual bear for one and the circumstances give the artist the chance to draw some interesting scenes.

A+ Overall I'd recommend this book to most anyone. I'll have to read the final version to see if I'll recommend it as an all ages book as Mike stated in an earlier comment that some of the violent scenes had been toned down. I'm really looking forward to seeing more of this book and would urge our readers to go try this story out on FCBD!
Posted by Gwen at Friday, April 24, 2009