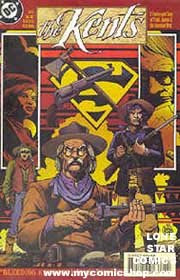 It's easy to peg why I bought The Kents, DC's 1997-98 12 issue series. John Ostrander and, more importantly, Tim Truman. I've been a Truman fan since my college days when he was publishing Scout through Eclipse. He was also the first comics guy I actually met, as he spoke at an English class a friend of mine was taking. I sat in and, it being a small liberal arts college, it wasn't hard to get some time to talk to him afterward. Scout and Wilderness are amongst my favorite writings still.
Truman brings a good amount of historical research to his work, when it's a sort of work that's based in a historical epoch or even if it's set in an imaginary future, so long as the history is important to the story. 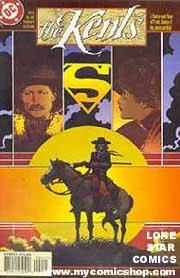 Though Truman didn't have anything to do with the writing this time, Ostrander did the same kind of thorough work. In some of the pages at the back of the book he expanded on the research that went into the project and provided some of the source material, should anyone want to check it out. He also talked about how the original pitch for the story was to feature Floyd (Deadshot) Lawson's family as the central characters, but DC's execs took the bolder step of having the Kents be the featured players.
But enough of that. On to the story. The set up is that Pa Kent, amatuer archeologist, is digging in the foundation of a previous Kent farmhouse that stood on the Kent farm when he finds a strong box. The contents of the box are the journals of Silas Kent, Nathaniel Kent, Joshua Freeman, and Mary Glenowen, along with some letters from Jebediah Kent and Belinda Kent. These documents tell the story of the Kent family from 1854 to 1874, primarily in Kansas. Pa Kent goes through them and gets them in order and sends 12 packets along to Clark Kent in Metropolis. It's a good story device that lets Pa introduce things and fill in bits that would be missing from the documents. Ostrander even has Pa comment on the oddity of his own story device, given that Pa could call Clark to talk about the documents or Clark could just fly there. It's a nice little touch that shows how much Ostrander put into thinking about his story and how it would be told.
The start of the tale has Silas Kent living in Massachusetts with his family, made up of wife, 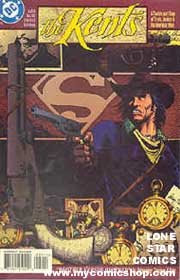 Abigail, and children, Nathaniel, Jebediah, Belinda, Lucy, Joel William, Owen, and twins Jonathan and Emma Lou. Silas helps escaped slaves on the underground railroad and, with the passage of the Kansas-Nebraska Act, decides to head to Kansas to help make it a free state as it would have been under the Missouri Compromise. The Missouri Compromise had agreed that states north of a certain parallel would be free, but the Kansas-Nebraska Act left it up to the vote of the people in the territory, even though Kansas was north of the demarcation line. Many New Englanders like the Kents were bent on seeing that Kansas be a free state, and Massachussets even passed a law providing assitance to those who would go.
Only Silas and the two oldest boys, Nathaniel and Jebediah, go to Kansas. The others are left behind in Massachussets because of the danger of Kansas. Kind of hard to think of Kansas as dangerous now, unless you think teaching science is dangerous, but in those days it would earn its nom du guerre, Bleeding Kansas. Silas is a printer and brings a portable press with him. He publishes a pro-free state paper. Nathaniel is close with his father and his father's cause, and is clearly envisioned as a look alike to Clark, though there would be no blood relation between them. I thought this a good choice because we don't have depictions of what might have been photos of Nathaniel Kent and the story is told as the imaginings of Pa and Clark from the documents they're reading. It would only fit that they would think of the forthright, upstanding young man of the story as appearing like Clark. 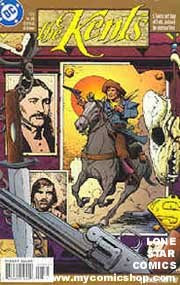 Younger brother Jeb is not at all interested in the cause. He's mostly interested in hunting and taking up with as many women as he can. He leans toward the slave state cause in advocating upholding the law, while his father and brother are more akin to the protesters of the Civil Rights Era advocates of resisting "unjust" laws. Just being in the eye of the beholder, of course.
Silas Kent is killed by a slave state ruffian, but Jeb falls more toward that cause nonetheless. Nathaniel keeps the printing operation going as well as a farm. As a result of his brother's needling about Nathaniel advocating for blacks but not knowing any, Nathaniel befriends a neighboring farm family composed of a freed slave and his wife and son (Joshua Freeman), whose freedom he had bought after his own release from slavery. Jeb, on the other hand, finds himself friends with William Quantrill, later of Quantrill's Raiders fame.
In fact, actual historical figures are sprinkled throughout the story. Harriet Tubman, William Quantrill, Bloody Bill Anderson, Jim Lane, Wild Bill Hickock, John Wilkes Booth, Buffalo Bill Cody, George Armstrong Custer, and a plethora of generals and government officials are to be found and fairly accurately depicted. Ostrander even throws in a distant relation between Jim Lane and Lois Lane for good measure. Hickock and Quantrill are featured more than any others, being bosom buddies to Nathaniel and Jeb, respecitvely.
But the story is also populated with some of my favorite DC characters from the era, Jonah Hex and Ke-woh-no-tay, Scalphunter. Those were some of the best, used, coverless books I bought from a local convenience store when I was a kid out in the sticks of PA. Ostrander uses them to good and important, not just cameo, effect, too.
To some extent the story follows a predictable path. Jeb and Nathaniel come to a violent 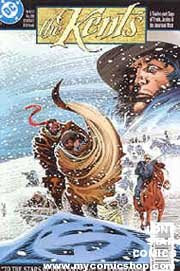 separation over slavery, with Jeb thinking he's killed Nathaniel. When the Civil War breaks out Nathaniel serves as a scout and spy for the Union Army while also searching for Joshua Freeman's parents and, eventually, Mary Glenowen, who's half Welsh and half Delaware Indian. The relationship between Nathaniel and Mary is the requisite love story in the piece. Jeb rides with Quantrill's Raiders, and after the war with the James Gang headed by Jesse James. Nathaniel finds Mary, settles down and has kids while working as a sheriff. But there's a final confrontation with Jeb, who's realized that his own son is a sociopathic wastrel. Jeb sets up his own son's gang for ambush by Nathaniel and the townspeople. Naturally, he winds up killed by his son before his son is also killed.
The greatness of the story is in all the detail Ostrander brings to the table. Not just the historical details, which make for a nice touch to an American History minor like myself, but also the character consistency. Jeb's letters to his sister Lucy laying out his story, and which he never mails to Lucy, do as much to develop his character as the imagined story pieces. Jeb is a man who never quite admits to himself his own responsibility for the situations in which he finds himself. He'll often say he's following his destined path, or he can't get out of a given situation he's in, but not until he finds his grown and warped son does he confront is own life. Even then, he's more interested in stopping his son, whatever the cost to himself, than in accepting that his own bad decisions have lead him to this point. It's much like the pathology of gang members today, with the exception that Jeb came from a more stable family life at the start. 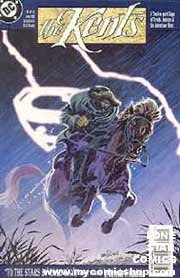 Nathaniel, like Clark, is soemthing of a straight arrow. He has his moments of anger, but he regrets them and thinks on what he can do to prevent recurrences. Even when he's bent on pursuing and killing Jeb for shooting him, he puts that aside to search for Joshua Freeman's parents and for Mary Glenowen. Eventually he lets go of the anger and desire to kill his brother, if not altogether forgiving him.
There is a lot more to this story than the summary here. Neither side in the free/slave fight is depicted as all good and pure. There are lunatics and fanatics on both sides, both historical and fictional, be they Jim Lane or John Brown on the free side or William Quantrill or Bloody Bill Anderson on the slave side. No question, slavery is depicted as wrong, but there's no illusion that the free staters thought blacks and whites were equal. Just as importantly, the Missourians who cross into Kansas to try to swing the state to slave are noted to be almost entirely made up of people who don't own any slaves themselves. Missourians, on the whole, were not wealthy enough for slaves, but even those without were wedded to it on principle. Without stating it outright, Ostrander brings out the contradiciton of this and the manipulation by wealthy slave holders that has these poor whites fighting for something they are unlikely to own, on the principle that they are superior to the slaves. And that was a lynchpin of slavery. It couldn't have been maintained without the poor whites being convinced that it was in their interest for wealthy people to have slaves, which couldn't be done without the mythology of racial superiority. That the free staters also bought into the racial superiority argument, for the most part, made it that much more difficult to muster forces to fight at times. It's hard to have people fight for the freedom of other people they believe to be their inferiors.
It reminds me of the Republican strategy of the last couple decades, which relied on convincing 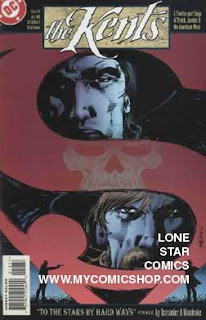 people to vote against their own interests in support of the wealth of others, at the expense of those same voters. The demagoguery of "welfare queens", wanton immigrants or terrorists serves the same purpose of setting up voters to believe they're superior to someone else who needs to be kept in check. Only by supporting the wealthy and the powerful can these unwanted people be kept at bay from the hard working common man/woman. Nevermind that the wealthy and the powerful are escaping paying their own share into the fight or are asking only the down trodden or families with long standing military tradition to bear the burden of the fight. Not that that strategy is working out well for the GOP these days. With no table scraps for the wealthy to toss to the masses, the masses aren't too happy with the wealthy.
But that's just me. Ostrander doesn't say any of that. Extrapolating is fun.
I should also point out that the last 4 issues featured the art of Tom Mandrake rather than Truman. This was clearly a planned thing and not a scramble at the end because it was mentioned as coming along in the first issue. Mandrake was an excellent choice, too. His art is similar in style to Truman's so there was no jarring break between issues 8 and 9. It's not the same, but it's in the vein.
I highly recommend getting this story, either by way of back issues bins (such as Lone Star Comics) or a trade. Hell, according to Amazon the trade can be found used for less than $4. A steal, I tell you! It cost me more than that just for the first two issues.
Posted by Thomm at Sunday, May 31, 2009