The more I go through these old books, the more I realize just how much a watershed year 1986 was, for me if no one else. Prior to Crisis on Infinite Earths I had read some DC comics here and there, but the only one I read consistently was The New Teen Titans. After Crisis, all sorts of new books were started, and many have stood the test of time. I may not have kept Justice League International, the Flash or Green Arrow, but they really were good books. Today's sampling, though, is far and away one of the best, not just of that era but in crime fiction.
Written by Denny O'Neil, pencilled by Denys Cowan, inked by Rick Magyar and colored by Tatjana Wood, The Question had a 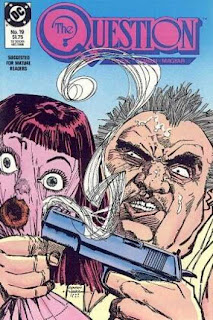 lot of talent bringing it to a more educated audience. On top of that it had covers by Bill Sienkiewicz and Cowan. The reader was expected to have had some exposure to other sources of information of the literate, philosophical and popular order. Eastern philosophy, Western philosophy, Christology, history, ethnic tension, feminism, militarism, religious extremism, drug policy, and sexual pecadillos, not to mention physics, chemistry and alchemy, were but a few of the many topics under consideration.
Not as literate, perhaps, as Walter Mosley or as raw in its violence as George Pelecanos, the Question remains a landmark in literature, sequential art or otherwise. There were no sound effects. There were no over the top teasers on the covers. The characters spoke to one another in conversationally flowing dialogue, appropriate to their mileu and abilities. Narrative interruptions outside of character conversation were minimal. Sex was treated openly and forthrightly, no doubt a factor in its Suggested for Mature Readers labeling as of the 8th issue. All in all, a fantastic comic, superior to The Dark Knight or Watchmen in its appeal to a non-comics audience and at least on a par with those limited series in the stories told, a particularly daunting feat in an ongoing series, which wouldn't be attained again until Neil Gaiman's The Sandman.
Taking a little used Charlton character created by Steve Ditko in 1967, the rights to which were acquired by DC in the early '80s, O'Neil took the upright, if extremist, Vic Sage, obnoxious 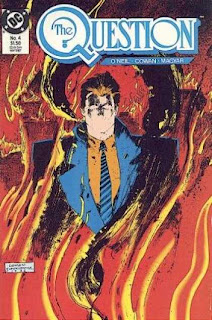 investigative reporter and secret crime fighter without mercy, and turned him into Charles Victor Szasz, orphan, aka TV reporter/investigator Vic Sage, aka The Question. Initially he's much like the original, in that he's driven to right the wrongs and expose corruption, which in his Hub City base, is pervasive. But this Question quickly learns that righteous anger won't carry him through the day. He's easily beaten by the enigmatic Lady Shiva when he charges into what he knows to be a trap, then is severely beaten and shot in the head with an air pistol before being dumped in a harbor. Luckily for him it's extremely cold in the water, the bullet didn't penetrate his skull and Lady Shiva (she's enigmatic, after all) pulls him out and takes him to Aristotle "Tot" Rodor, Pee Aitch Dee. From there Lady Shiva mysteriously (yeah, more enigmatic) directs him to the tutelage of Richard, wheelchair bound master of martial arts and Eastern philosophy of a Zen bent.
(This is the first use that I know of the now trite killing of the feature character in the first issue. Nothing for O'Neil to apologize for, though. It's not his fault the idea was so good it would be done to death.)
After spending a year with Richard, we're pretty much at the established base of the series. Sage 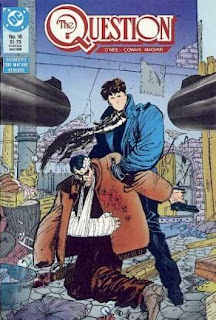 returns to Hub city with a vague explanation of some sort for his disappearance, though not much, and really not a lot of attempt to hide that he is the Question as well. He doesn't announce it publicly, but to those who know him, it's not a well guarded secret. In his absence the city has sunk farther, and his sort of girlfriend, or at least bed partner, Myra Connely (also a TV reporter), has been blackmailed into marrying the besotted mayor. The decline of the city is being driven by a minister who's not really a minister who wants to make things as bad as possible in order to speed God's wrath and wipe the world clean. He reached this revelation in Vietnam, though I'm not sure how he escaped there, having turned his weapon on both sides indiscriminately upon reaching his revelation. Interestingly, Yin to the faux minister's Yang is not the Question. It's Izzy O'Toole, tops of the corrupt cops for 20 years who has a revelation of his own and becomes the leading honest cop on an almost entirely corrupt force.
After this initial set piece is done there are stories about the hit man who shot him (Baby Gunn), a Gypsy crime boss who was raised by wolves, the warped desire for paternal approval and affection that comes of a boy raised by a gangster father, and another vigilante who takes the retribution further with apropos mutilation of particularly egregious abusers. There are no repeating villians, as they seldom survive their only story appearance.
All the while O'Neil brings out the various topics mentioned above and encourages lively discussion thereof. The now unheard of two page letters column, at least at DC, is a very lively forum indeed. The forum is dubbed The Answer, for obvious reasons. Several writers are disturbed by the changes to Ditko's original character (even throwing in an utter lack of scientific knowledge in questioning a statement in the story, now rather well known in science, that subatomic particles may behave differently when being observed than when not). There are the expected objections to the depiction of religious (read Christian) figures, though our minister in question is not actually a minister, and a racist who quotes the Bible for support is clearly not 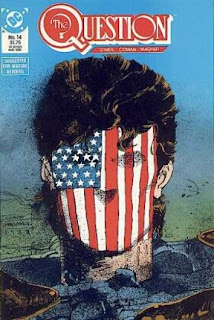 quoting his source correctly. There are charges of anti-military bias for a two part story involving a rogue elite tactical force that kills off another SEALs type of force, though I'd have to say that's one of the best and most memorable stories in the entire series run. There's generally the usual accusations of liberal bias, as anyone who questioned the status quo of the Reagan era would expect, but also a good deal of approval. In fact, this is the rare book I've read for the Comics Cabinet where I've read all of the letters columns, too. Though the arguments are 20 years old, they're still trenchant and enlivening. That may be the one thing you'd miss if you picked these up in trade form, and which you should really experience. This is one instance where getting the letters as well as the story is really necessary for full enjoyment. And that doesn't even mention the monthly recommended reading from O'Neil.
I only re-read the first 19 issues of the series for this posting. I'm going to have to read more. I don't even recall if I have the entire run of the series, which ended in 1990, but it'll be fun to find out. O'Neil didn't involve the Question in much of the larger DC universe, wisely. Batman made a flashback appearance in the first issue and a hallucenatory appearance in the second. Green Arrow showed up when the Question chased a couple of Butch and Sundance themed arms smugglers back to Seattle. These are the right kinds of superheroes to interact with the Question. Like him, they have no super powers and rely on superior skills, training and devotion to a cause.
I've enjoyed the Rene Montoya version of the Question that was created in 52 and seen in the Crime Bible series, but the character so far has lacked the depth of the O'Neil verision of Sage/Szasz. She has some compelling history and interesting observations, but the heft isn't there. Hopefully someone will take her character to another level in due course.
Posted by Thomm at Sunday, June 28, 2009