Working a bit afield of the comics aspect of things, today's missive visits another land of

imagination, the amusement park. I've always been a 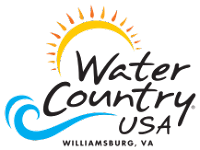 
I hadn't been to Busch Gardens since the summer my parents split up, which was somewhere around 1981. You haven't lived until you've spent a week in a small camper with parents on the verge of a split when you're 14 years old and ready to beat your 12 year old pest of a brother just on principle. Throw in one radio station that plays the same 4 songs over and over, and you're in for the time of your life. I will forever abhor Juice Newton and Air Supply. There's no obloquy too strong for them. 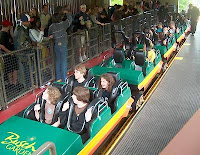 Despite that, I have fond memories of Busch Gardens. I liked the theme of various European countries that is the core appeal of the park. I thought the Loch Ness Monster was quite the roller coaster, too. Even my picky palate at that age was well satisfied with the fare. 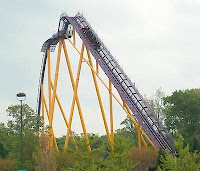 Now, being on the parental end of it, it's not so much. For one, it only has 4 roller coasters (that aren't kiddie rides). Three of them

were new to me - Apollo's Chariot, Alpengeist, and Griffon. DarKastle is apparently considered by some to be a roller coaster, but it's not. It's very 3-D reliant rather than actual motion, though there is some. It's really no more a roller coaster than Europe in the Air, which is supposed to simulate a helicopter ride around Europe. Because both involve visual effects that don't match with the physical motion they just give me nausea, not a thrill or even a mildly entertaining experience. 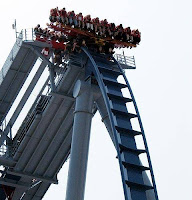 But I digress. I had been to Hershey numerous times as a kid, but in going to Busch Gardens those years ago I didn't connect another difference. Hershey is a much more compact park. Busch Gardens has a lot of ground to cover, especially between each of the 4 roller coasters. There's no real direct lines, either. It's all indirect so that you're going through areas that are of little interest to get to what you want. Now, all parks have that to some extent, but the degree at Busch Gardens seems extreme. We got a lot of exercise getting to the coasters. It's a good thing we're all in good shape.

There is a lift/tram that takes a triangular pattern through parts of the park that can cut out some of the walking, as well as a train that runs around and through the park, but they have their limitations. The train shuts down a couple hours before the park. The signs say it's to get ready for the nightly fireworks, but it makes for a lot more foot traffic. There's also no train stop in the German section. The lift/tram doesn't go to the Italy section and if there's any hint of a thunderstorm, it's shut down. More than a few of those crop up in the summer.

On the other hand, the three newer coasters are really very good. The Loch Ness Monster is

dated. It looks old. It feels old. It's lost a lot of the thrill it had when I was younger. Then again, Hershey's top billed coaster in 1981 was the Super Dooper Looper, a very lame coaster. At least Hershey had the Comet, a great, classic wooden coaster. 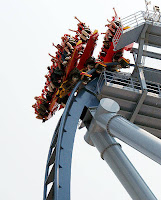 The Griffon was easily my favorite, as it was with the kids. I

t's something Hershey currently doesn't have anything akin. It has three rows to a car, each row having 10 seats. The seats on either edge, about 3 on either side, overhang nothing but air during the ride. It's a great feeling of suspension with no view of tracks below your feet. It emphasizes that in the ride by taking you up to its top height, then stopping with the car overhaning the first, very steep drop. It does something similar for a second drop, though not as steep, and you're not left hanging as long.

Apollo's Chariot boasts high speeds and a long ride. It's also very smooth. My wife liked that one. Alpengeist is a suspended coaster like the Great Bear at Hershey. I think the Great Bear is a better ride, but the Alpengeist is pretty close. Alpengeist was the hardest coaster entrance to locate, being hidden in a corner of the German section of the park.
Hmm, this has gone on a bit. Looks like time for a break until next week.
Posted by Thomm at Sunday, August 21, 2011