Invincible, From Beginning to End

I did it. As promised I re-read the entire Invincible series from issues 1-144. None of the ancillary series that spun out of it. Just the motherland. So here’s what I think. And SPOILERS. You’ve been warned.

This epic is the work of Robert Kirkman, Ryan Ottley, and Cliff Rathburn, for those who don’t know. Corey Walker was the co-creator with Kirkman and preceded Ottley, but Ottley did most of the work. Published by Image, of course. Invincible the book is a good look at the development of Image as a publisher. The book started as superhero derivative, attempted to ape the Big Two, and grew past that to be an independent story that broke ground and told an excellent story.

The launching conceit was that a Superman like hero called Omni-man (Nolan Grayson) has a son (Mark) with a human woman (Debbie). Mark develops the same powers by his senior year in high school and adopts the name Invincible. The series follows the growing pains of a new young hero, right down to a Teen Titans aping group called the Teen Team, juniors to the JLA knock off Guardians of the Globe.

By the end of the opening twelve issues the story takes an Alan Moore turn when it’s revealed that Nolan’s Viltrumite people aren’t benevolently protecting Earth to aid in human develop but are preparing it for conquest and incorporation into the Viltrumite Empire. The reveal is Nolan killing all his Guardians teammates and nearly killing Mark when the latter refuses to go along. 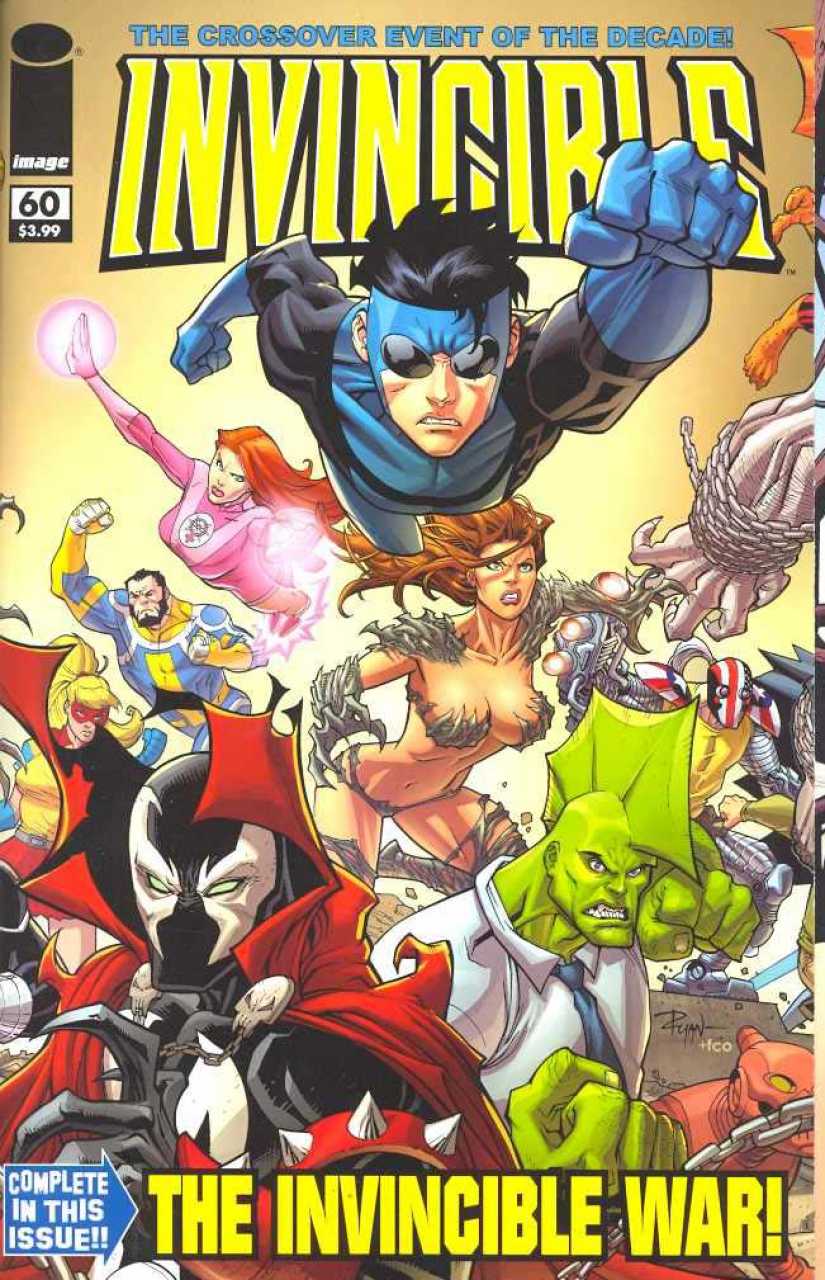 The series rolls into the better forgotten time of an Image wide crossover event that centers on somewhere under 20 versions of Mark from other dimensions trying to take over the world. There are a lot of versions of Mark that are ok with world dictatorship and mass killing.  It would have been a great story if limited to Invincible and the many superhero teams Kirkman had already created in that world, but it involved all the remotely superhero characters Image published. Fortunately it didn’t involve The Walking Dead, but it was unwieldy and unsatisfying as you'd expect from a crossover event.

This is when readers learned that Atomic Eve (Samantha Eve Wilkins), love interest to Mark, is effectively immortal. With the dangers she and Mark frequently faced, it was handy that both she and Mark are near immortal. Nolan was over 1000 years old and still in his prime at this point. Mark was likely to follow.

The series runs through more alternate dimension stories and a lot of forays off Earth. Nolan is redeemed as a goodish guy. Mark winds up with a half brother, Oliver (Kid Omni-man) from Nolan’s time hiding after the big fight with Mark. Mark and Eve have a daughter, Terra.

The series is best when it’s about the characters. Mark and Eve can be a little trying with their various arguments, but they are the core and are realistic in their fears as young lovers and young parents.

Perhaps the two biggest social issues addressed during the series are abortion and rape. The former does the most benefit by considering abortion a medical decision between a woman and her physician. There’s not even a hint of a specious argument that anyone else is or should be involved.

The rape story is a bit more problematic. Mark is raped by another Viltrumite when she refuses to follow orders to mate with a human and thinks Mark is a better choice as a half Viltrumite. Mark’s reaction and feelings of guilt and shame are a great exploration of what it means to survive rape. The problematic is the reformation of the rapist by her eventual development of feelings of affection for a human. She’s never punished in any way for the rape. It’s quite like church sexual assault cases that get a round of applause for confession. Interestingly, this story occurred before that incident.

But forgiveness is one of the two major themes of the book. Nolan is forgiven for killing the Guardians and thousands of civillians. Mark forgives Dinosaurus. Amanda (Monster Girl) forgives Rex/Rudy (Robot). Eve forgives Rex (Rexsplode). Everyone forgives Immortal. Mark forgives Allen the Alien. Nolan forgives Thragg. Some of the forgiveness works out better than others. It’s a mixed bag on forgiveness.

The other theme is ironic with an atheist writer. There’s a real argument that the conclusion of the book is that benevolent deism is a good thing. Throughout the story characters try to rule Earth, the known universe, or both. Some are purely in it for personal gain or revenge. Others are claiming to act for the benefit of all 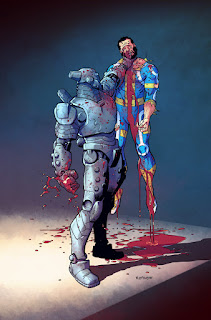 The most significant is Robot who implements a dictatorship of his unparalleled intelligence. Mark opposes him, in fits and starts, but the end result is not only that there remains a behind the scenes dictatorship over all of Earth headed by an immortal duopoly but also Viltrumites become a similar universal force to such an extent that a federal system of planets is dissolved. Very curious conclusion.

I would have like more time to develop that but the series felt like it rushed to the end, especially in the last issue. Up to that point the story felt like it moved as originally intended. Terra was a great six year old character with a lot of future. The last issue rushed through her future and that of many others, yet still left the stories of Debbie and Zandale (Bulletproof) unresolved.

Which brings up another point. It’s an overwhelmingly white story. Characters who aren’t white include Bulletproof, Black Samson, Dupli-Kate, Multi-Paul, Darkwing, Elephant, Scott, an unnamed but oft seen Viltrumite, and Best Tiger. Only Bulletproof is at all developed as a character, and his development abruptly halts and is never pursued or resolved. Then again, there’s exactly one not straight couple, half of which is often a petty, self-absorbed tool before suddenly being much better after finding the partner who works. Considering how much more Kirkman has developed a wide variety and wide number of characters in The Walking Dead, the same would have been nice in Invincible.  The two books have been around a similar amount of time, though fewer issues for Invincible. 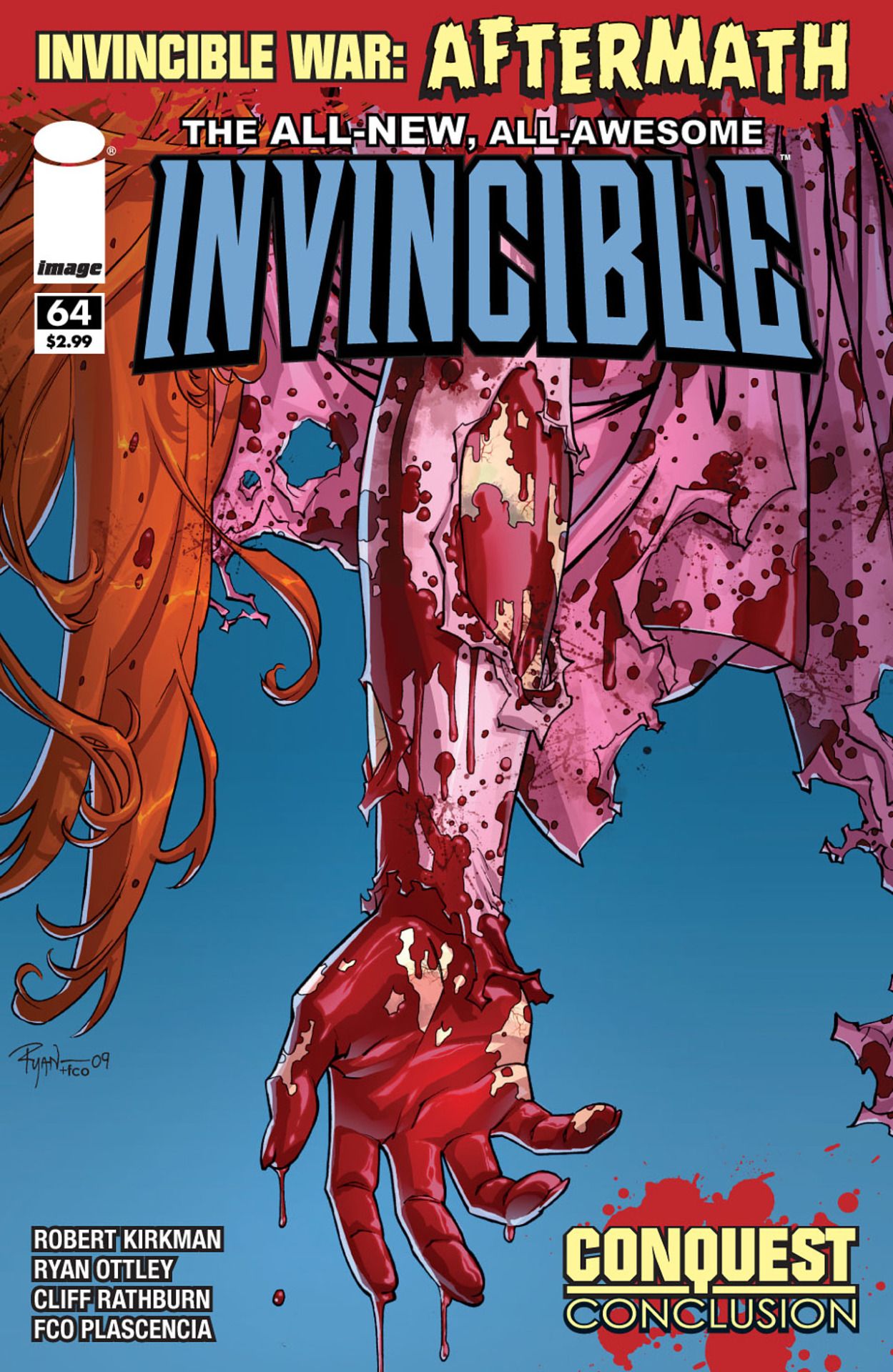 Similarly, in a book that doesn’t shy away from graphic violence or “language” the prurience about depictions of sex is disappointing. People fuck a lot in this book, but there’s never a realistic depiction of how that looks. It’s network TV cover and angle. Again, The Walking Dead has had realistic nudity in the appropriate situations. It’s been years seen I’ve seen any, but it has. I know Kirkman has addressed it as a ratings/availability thing that a superhero book audience has, but given the massive popularity of The Walking Dead that far exceeds Invincible, I don’t find the argument compelling.  Less so with the spot on depictions of sex in Image hit Saga.

Overall Invincible is well worth the read. Image found its footing as a great place for creator owned stories during this run and the book benefited from the company’s and its writer’s growth during that time. There are a lot of great areas for discussion amidst a story that was well told. I suspect the rushed feeling of the final issue is a window for the creators to return to it sone years on if the urge arises, but the final as it stands left quite a bit unresolved if it is a final.
Posted by Unknown at Sunday, April 08, 2018