The State of Comics And...

Our beloved founder and zen "pool" master, Jim, has let it be known that he's bowing out of our Comics And...Other Imaginary Tales reunion tour.  He's certainly been the guiding force behind this endeavor, encouraging us with his comments and schedule reminders.  Not to mention he's the one person we can always count on to actually read our posts.  According to said schedule, Shawn and Lee are up for the next two Sundays, but I honestly don't know if they or Thomas will want to continue on a regular basis or not (Gwen was already taking a hiatus).  I for one have two posts "in the can" to share that I keep pushing back for newer material.

Anyway, I, personally don't plan to stop (the "...of course, we can still be friends" stage), but in terms of a standard rotation or organizational format, I think it will be whenever the mood strikes us, i.e. "No Deadlines!"  It'll be interesting to see if not having the deadlines will promote more posting or less.  We're all quite busy (as I'll discuss more below) and this is just for fun.  I appreciate the opportunity to express myself and this is an awesome way to accomplish that on a semi-regular basis.  Without it, I'm just reading/thinking about stuff by myself and that's not nearly as enjoyable as being part of the larger Comics community.  We may not be comics creators (yet), but somebody's got to be the "Siskel and Ebert" too.  To quote Roy Neary from Close Encounters of the Third Kind, "This means something; this is important." Or not, maybe we just like to play with our mashed potatoes...


So, in typical comic-fashion, I've been having a Crisis of sorts...A Crisis of Too Many Unread Comics!  (That was going to be the original title of this post. I probably have well over a hundred by now.)  Every week almost without fail I faithfully stop into my Local Comics Shop (LCS) on New Comics Wednesday, the stupendous Cosmic Comix and Toys, which I've been a patron of for over 20 years.  I truly love it there, not just the atmosphere, but the chance to chat with the gang and the regulars.  It's a bit like my version of Cheers.  I get my books hand delivered for me from my box, or I'm allowed the privileged to go behind the counter and get them myself.  I carefully study the issues (like Juan Valdez) and if necessary go to the rack and select the best copy possible. The service is exceptional. They'll place stuff in my box (beyond my "normal" list based on just an e-mail [sometimes the day of]) to check out with no pressure or obligation to buy.  I can always put something back, because they know there is always something else I'll probably pick up.

Even when I try to cut back, I usually get something new.  For example, this week I picked up Batgirl #25, 26, 27, and 28.  The art by Paul Pelletier was the main draw, but the story was really great too and I highly recommend the series (and may discuss further in another post).  I canceled Vampironica by Archie Comics.  It was like a combination of Buffy and Blade with Archie characters and drawn by the excellent Greg Smallwood, but EVERY issue arrives DAMAGED.  I might be willing to pay a buck for a beat up book, but not four! 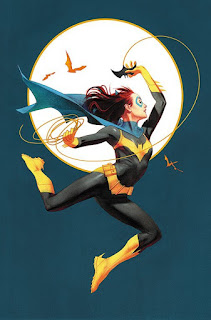 I also picked up a slew of Marvel books, including a lot of Infinity Wars/Warps tie-ins. (I really enjoyed Duggan's All-New Guardians of the Galaxy, but they've gone overboard with this Warps concept (trying to create the next Spider-Gwen or Cosmic Ghost Rider.) Really, the best thing about Marvel is their digital codes.  I have a friend in Australia who Paypals me cover price minus $2 for each of them.  It's a huge savings for both of us. Unfortunately, I've gotten so far behind in my Marvel reading that I get the books only to bag and board them for months at at time until I give up on ever hoping to read them and relist on ebay.  I just sold my Venom:First Host lot last Friday.  I actually read that and liked it, but it was one of the few things I thought would actually sell , so up it went (it took less than 24 hours).  It might have helped that I listed it for cover price minus a dollar per issue to account for the lack of digital codes.  I loved the finale of Dan Slott's Amazing Spider-Man, but the new series is a little too tongue in cheek for my tastes. Sure, it's funny and entertaining, but it doesn't feel like Spider-Man to me.  A lot of books are that way.  Then there are the super serious ones like Immortal Hulk and Captain America, both sporting exceptional Alex Ross covers.  I enjoy the Hulk quite a bit, but Cap is unreadable and the middle-aged Sharon Carter desperately hoping for some affection from Steve is painful to watch.

To be honest, I'm digging DC books more than Marvel right now. Hawkman by Bryan Hitch is a stand out for me along with Tom King's Batman, the recent Two-Face arc in Detective Comics and Justice League Dark.  Then there are the mega maxi-series like Doomsday Clock and Heroes in Crisis (are those people really supposed to be dead?!  Wally West?!  We just got him back!)  Although, I've given up on reading the Bendis Superman books for now.  Of course, I'm still buying them all, but I'm three months behind (times two series) and I'd spend all my limited time catching up. (Plus, I really hate Rogol Zaar and can't wait for him to be gone.)  Now, I may eventually binge read a bunch or try to sell them.  I've been getting the new Justice League series, but I'm like 9 issues behind now and the Drowned Earth series is just going to further tax my budget.  You can buy them here (second shameful plug).  Despite my interest, I'm just not invested in these storylines right now.  If only that were true for all the comics related TV shows I partake in... 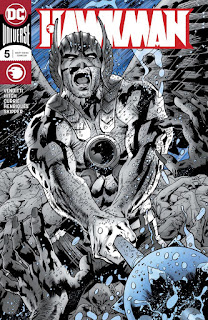 I love all the Marvel Netflix series (those that are left, sadly).  I watched Iron Fist season 2 twice, the first viewing in 26 hours.  Then I rewatched Defenders with my daughter and started Daredevil season one for the umpteenth time.  I'd probably be well on my way of watching Daredevil season three by now, but my wife wanted me to wait to watch it with her (it's been a week since episode three [SOB]).  The fever has at least left me for now. 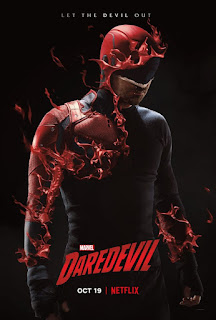 The new CW shows are all in full swing with Riverdale being my favorite.  Flash seems promising again this season, Legends is still a lot of fun, and Arrow has been pretty good.  I'm really excited that John Wesley Shipp is returning as the 1990's Flash in an upcoming cross-over.  I've been waiting for that since the beginning of the show.  I like Black Lightning, but I'm going to probably wait to binge it once the season is over.  I don't want catching up on my weekly TV shows to be a part-time job!  Besides, there are still some Petticoat Junctions to watch (excellent series, so funny).  My youngest son and I are about to finish the original Lost in Space series, which we usually view on Friday mornings before he goes to school.  We've finished the 60s Batman series and Six Million Dollar Man.  We need to finish Buck Rogers, Bionic Woman, and The Incredible Hulk.  We took a side trip and enjoyed the first (only?) season of the Justice League Action cartoon, which included great portrayals of Firestorm and Booster Gold. 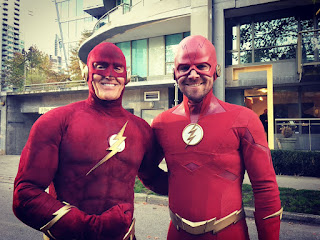 So obviously, TV watching, which I'm highly invested in, takes up a bunch of my "free time".  Then there is blogging (thinking about what I want to write at least) or ebay listing (thinking about what I want to sell at least), not to mention unscheduled Facebook challenges!  There are also the numerous hardcovers I'm getting.  These are high on my reading list and kick the new comics to the curb.  The Doug Moench Fantastic Four's have been slow going for me (Marvel Masterworks volume 20).  Bill Sienkiewicz draws an unsettling Reed Richards with his neck always stretched out. The latest Iron Man volume (#11) contains some favorites and I'm eagerly awaiting volume 12 next Spring.  So much to read, so little time.  That doesn't even bring into play the fact that when I do sit down to read something, I often fall asleep!  Or when I wake up in the middle of the night from insomnia on the weekends (or just get up early), my eyes aren't focused enough to actually enjoy reading.  Plus, even with my new Oscar Goldman's I still have to vary the distance to get perfect clarity.

The point of this all is that I really need to change my buying habits.*  This year's Baltimore Comic-Con reminded me how much I love original art and classic Bronze Age comics.  If I severely reduced my new comic list, then I could afford some really cool commissions.  But it's so hard to stop, after all part of the act of buying something you may never read is a hopeful endeavor...a promise that you really will get that time by the pool to relax and enjoy something special one day.  What I want is a series or character I really care about like I do my favorites on TV.  Batgirl has some strong potential at least.  But some of the big events...it may be a great story, but in the scheme of things I can live without it or wait for the trade.

*My motivation for the books I'm getting is out-of-whack:  It should be reading first, then collecting, and finally looking at resale value.  Instead it is more backwards, looking for resale (buying the next issue to help with a sale), mindlessly collecting, and then reading.

I have enjoyed some independent books lately too like Isola, Oblivion Song, and Hey, Kids Comics!  Unfortunately, the Simpsons ended it's 25 year run with Bongo the other week.  We didn't even get a new Halloween Treehouse of Horror this year.  Speaking of Halloween, the kids are back from the Halloween-Disco (thankfully I found that 5-spot on my dog walk earlier which helped pay for them to go), so I better sign off.  Happy Halloween and I'll see you around sometime when you least expect it.  Keep Reading!