The Week of June 1 Review

The whole DC re-launch is the subject I can’t get enough of from last week. It has almost blown any other commentary or thoughts on comics out the window. It certainly has made the DC preview review post this week old news and now more of a historical record of my thoughts before the news hit. Still this is a review column for what came out last week and I still have stuff to say about what I have actually read as opposed to what I might be reading three months in the future. 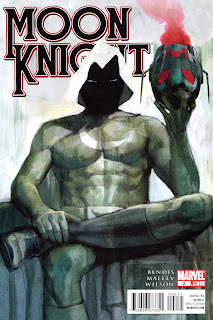 Okay I’m going negative from the jump. My friend and owner of the store I shop in highlighted Moon Knight #2 as one of the better books for this week, citing it was better than issue #1. Fainter praise would be hard to find, but I jumped aboard anyway. First off it was 22 pages for $4, how do you say “bend me over and rape me” in French Lee as it must feel better if I can’t understand it. Second, Bendis writes some of the worst dialogue in comics. I remember watching a Spider-Woman motion comic and hearing the words actually said made me physically cringe. A sample from Moon Knight #2, a fight between Moon Knight dressed as Spider-Man versus a bad a** girl.
Bad Girl: “Who are you?”
MK:”Who am I? I? Me? People have heard of me. The big question today is how far down the criminal food chain are you?”
Bad Girl: “This is who I am!”
Skipping ahead
Bad Girl: You know what? Forget it. I don’t care who you are. I’ll find out after you’re dead.”
And while reading it with the art the patter just falls so flat and feels so stupid and inane. I know Moon Knight is suppose to be crazy, but this new manifestation of his insanity is out of left field and has no rhyme or reason to it other than the writer thought it would be cool. Hey if you like Moon Knight thinking he is Spider-Man, Wolverine and Captain America, than great, I don’t. If Moon Knight was totally insane like this he could not even operate and be running his hugely successful TV show. Of course some think this will tie into Bendis next big Avengers story, but I’m dropping this book, again.

Halcyon #5 (of 5) came out. I have a feeling this was one of those written for the last page books. Also I have a gut feeling this was not meant to be a five issue mini-series as the story felt rushed at times. Some speculate that this is a pitch book for the writer and he was trying to underwrite the work by selling it as a comic. Heck that is what Radical Comics company plan is for their series. Still I wanted more details and a longer story and I’m curious as to where the story would go next. I hope we are all wrong and this is just volume one in a series that will come out once or twice a year as a series of mini-series. I’m anxious to read the whole story at once and see what I think of it. 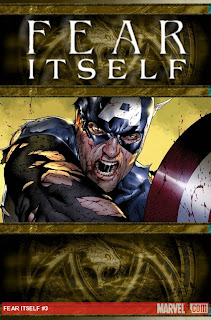 Marvel’s big event is falling flat for me. The actual Fear Itself #3 came out and I feel like the core series is not holding together as a coherent story. This was more akin to Final Crisis where Grant stated it was more like surfing a TV channel as we switch from all the things occurring at once. We have Bucky Cap and a group of Avengers fighting the godlike empowered Sin and her Nazi robots who are destroying Washington, DC. (Why are the Avengers stopping her, I see a positive side to some of her actions :p). Little Loki helps Thor escape and Daddy Odin immediately stops it and sends Thor to Earth as punishment. Oh by the way he just forced Thor off Earth like last issue. Pictures of hammer wielders creating havoc and destruction, enticing us to track down the spin off and cross over books I guess. We have Steve Rogers jumping out of a plane and abandoning his leadership post because he wants to get his hands dirty again. Finally Bucky Cap gets killed by the godlike Sin. Chest blown opened killed; if he is revived it will be total BS. If he does not live what the heck did Marvel do by allowing Brubaker to bring Bucky back making him one of the more interesting and complex characters in comics and more to the point why did I care? Plus his own series is currently starting him in a Gulag in Russia. So if he is not dead what a crock regarding making Fear Itself have any impact, if he is dead what a crock in giving us some many stories about this character. While Bucky has failed as Captain America, the whole Winter Solider story and trying to be your mentor has a lot of story potential left in it. Almost a lose/lose situation with that story choice, of course Fear Itself barely has a story in the main series. 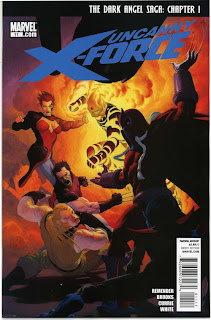 Marvel’s Uncanny X-Force #11 hit the stands and continues to be one of the best books by Marvel and their best super hero book by far. The pace of the story telling is excellent. The plot never dawdles or meanders about; it is a crisp fast pace that just continuously moves the story forward. What is most impressive about the story telling is how each issue succeeds on its own merits. Writers with better pedigrees and more star status can’t pull it off, but Remender is doing a great job with Uncanny. The issue is called The Dark Angel Saga Chapter One, but it is picking up from the last issue as though page 1 was actually page 21 from last issue. The base story this issue is the team goes to the world of the Age of Apocalypse to get the life seed to save Warren. The evil Beast manages to leave them in that world and they fail to get the seed. It is a story with a beginning, middle and an endpoint. The epilogue then takes us to setting up the next chapter, but the issue stands on its own. Heck I want to read the Age of Apocalypse stuff since this has me so interested in that alternative reality. As good as the story is the art is also very good and we have at least the fourth different artist. Mark Brooks stylistically is not even close to people like Opena and Tan, yet because they have a more realistic style and the color artist has remained the same the atmosphere and feel of the book is very consistent. Finally the publishing schedule has been closer to about an issue every three weeks and that just helps push the book along even better. The one slow issue where Magneto asks the group to do something is quickly forgotten as we jump back into story after story.

DC’s massive announcement has me worried about the few series I like and this week’s Secret Six #34 was a bittersweet issue. As always Gail Simone along with artist Jim Califore create a great issue and make characters like Catman, Scandal, Bane, Ragman and the rest some of the most interesting people in the DCU. The almost family like dynamic has been amazing to watch grow and at the same time they are still not the nicest people you would ever want to hang around. The bitter portion of this book is what it will look like after August or if it will be here after August. 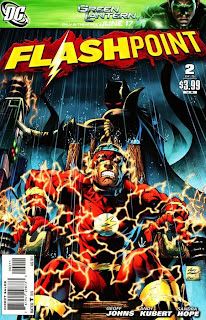 What has to be considered the core book of the DCNu came out with Flashpoint #2. The story opens with Deathstroke as some sort of pirate floating around the flooded out remains of Paris. His crew has characters that I recognize from Warlord and also has names like Clayface and Electric Eel. It has a shock moment when a scarred Aquaman with his brother Ocean Master jump up on the ship ready to kill Deathstroke. Now I know we are suppose to just go with the flow and let the mini-series maybe fill in some of the blanks but this type of stuff exemplifies the problem with alternative world books. Why would what the Reverse Flash has done change history to create this type of stuff? Deathstroke is a character who has a strong origin and basis and I guess you can say this is a natural offshoot of his mercenary nature, but it feels totally out of sorts. Also Aquaman as such an evil Emperor, I’m guessing Johns feels nurture beats nature all the time. In my mind I like to think a true hero would overcome any circumstance. I did enjoy Barry trying to get his powers back and it ended up costing him big time. Three issues is not a lot of time to right the world and of course with DCNu around the corner we know Barry will not succeed as we march into a brave new world. Of course fixing the timeline in its entirety down the road is always an option to reboot the re-launch.

Possibly the best book this week is Flashpoint Batman Knight of Vengeance #1. Brian Azzarello and Eduardo Risso have always been a great team. Brian’s style of writing often leaves me confused as his work can be obtuse at times. This was a straight forward story, with terrific art by Risso, who never fails to deliver great art. Thomas Wayne is Batman and he is a harsh version of the character. This Batman is not a great fighter or detective, but is a man with a mission to take out crime and crush it in any way that he can. From beginning to end you are drawn into this version of Batman and understand why he is this way and how the familiar cast of characters has changed. Thomas is harsh and willing to kill and is not a person you would want to face in a dark alley. Batman is someone to be feared, but not in the way Bruce crafted his persona, but in a whole different way.

That puts last week to bed. Next week’s list is still too darn long. Of course signing up for all the Flashpoint issues hurts. I have to say one thing with DC re-launching everything and not knowing what is changing in their continuity I find it hard to care about any of their regular series right now. The list is American Vampire Survival of the Fittest, Batman and Robin, Birds of Prey, Flashpoint Citizen Cold, Flashpoint Deathstroke The Curse of Ravager, Flashpoint Emperor Aquaman, Flashpoint Frankenstein Creatures of the Unknown, Preacher HC Volume 4, Red Robin, Scalped, Titans, Unwritten, Annihilators, Ka-Zar, Mystery Men, New Avengers, Punishermax, Wolverine, Breed, Green Wake, Morning Glories, Spawn, Savage Sword of Conan, Total Recall, Caligula, Farscape, Echo, the last issue - :(, Vamperilla and Warlord of Mars.
Posted by Jim at Monday, June 06, 2011