Lee: This is going to be a short list this month. After Jim's 11 day opus, we all need a break. Anyway, still a bunch of good books to choose from this month.
Gwen: Wow, Lee must be really burnt out - we almost never have only 2 parts for Indies. 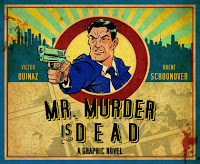 Archaia Entertainment LLC
Mr. Murder is Dead HC by (W) Victor Quinaz (A) Brent Schoonover
There's been a murder-Mr. Murder is found dead! Old Gould Kane, long into his retirement as a top cop, looks to be the #1 suspect with a motive so deep and intense even Gould's old partner suspects him. But the truth is Gould's the only cop worth a damn to solve the cryptic case. The clues could lead Gould to a new and perhaps even greater profession in his twilight as a very bad man. Mr. Murder is Dead is a who didn't do it set in the fading world of Golden Age comic strips. A criminal's lament to all things past, present and meaningless. Published in partnership with Zachary Quinto (Star Trek, Heroes) and Before the Door. 112 pgs, $19.95. See preview pgs here.
Lee: The art is a little cartoony but the longer I looked at it, the more I liked it. It seems to be somewhere in the same vein as Veitch when he did Greyshirt with Alan Moore. I’m not sure if the story is any good but the art appears strong enough to save it. It’s worth investigating.
Gwen: While the concept is interesting I think I'd pass on this one for the time being. I like murder mysteries but the main character throws me off a little. The books that appeal to me more these days are the ones with characters I can more easily empathize with.

A Tale of Sand HC by (W) Jim Henson, Jerry Juhl (A) Ramon Perez
Join us as we explore this missing piece of Jim Henson's career in a celebration of his creative process. Discovered in the Archives of The Jim Henson Company, A Tale of Sand is an original graphic novel adaptation of an unproduced, feature-length screenplay written by Jim Henson and his frequent writing partner, Jerry Juhl. A Tale of Sand follows scruffy everyman, Mac, who wakes up in an unfamiliar town, and is chased across the desert of the American Southwest by all manners of man and beast of unimaginable proportions. Produced with the complete blessing of Henson co-CEO Lisa Henson, A Tale of Sand will allow Henson fans to recognize some of the inspirations and set pieces that appeared in later Henson Company productions. $24.95 Visit Perez here. http://www.ramonperez.com/
Lee: This was a pass because I had doubts about Jim Henson’s ability to write a story that didn’t involve muppets. But, once I learned it was written late 60’s/early 70’s I think it will be deeper than I first thought. Most of the material from that time tends to be more introspective so this should be more of the same. And, visiting Perez’s site, seeing some samples, makes me trust the artist too. This is certainly worth investigation.
Gwen: Intriguing, I have to say. I am always entertained by what gets published when we find work that was "hidden away" as it were. I'm always somewhat hesitant about it - I mean if I die and leave behind stories never published maybe there was a reason I never published them. Or stuff like Edgar Rice Burroughs "Llana of Gathol"comes out and reads nothing like any of the authors other work so you have to wonder if the writer actually wrote it.

Boom! Studios
Hellraiser Vol. 01 SC by (W) Clive Barker, Christopher Monfette (A) Leonardo Manco
One of the greatest horror franchises of all time returns, now under the control of its original creator! Clive Barker has touched Hellraiser only twice: once to write The Hellbound Heart, and once more to write and direct the original Hellraiser film. Now witness Barker's long-awaited return to tell a new chapter in the series' official continuity - a trajectory that will forever change the Cenobites and Pinhead! So prepare your soul for an epic journey into horror from one of the medium's greatest voices, and starring one of the medium's greatest characters, in an unforgettable new chapter of Hellraiser. $9.99
Lee: I think the name is causing people to stay away from this because it seems to be a been there/done that mentality. Well, let me tell you, this is one better horror stories on the stands right now. If you aren’t reading it then you don’t know what you are missing. Well worth the price of entrance.
Gwen: I'll take Lee's word on it - I never really got into the Hellraiser stuff. I do appreciate the variety of Boom's publishing though.

Drawn & Quarterly
Daniel Clowes' Death-Ray HC by (W/A) Daniel Clowes
Teen outcast Andy is an orphaned nobody with only one friend, the obnoxious but loyal Louie. They roam school halls and city streets, invisible to everyone but bullies and tormentors, until the glorious day when Andy takes his first puff on a cigarette. That night he wakes, heart pounding, soaked in sweat, and finds himself suddenly overcome with the peculiar notion that he can do anything. The Death-Ray utilizes the classic staples of the superhero genre and reconfigures them in a story that is anything but morally simplistic. With subtle comedy, deft mastery, and an obvious affection for the bold pop-art exuberance of comic book design, Daniel Clowes delivers a contemporary meditation on the darkness of the human psyche. $19.95
Lee: I know Clowes is one of the granddaddies of the indies but his material has never really worked for me. But, I need to give it one more chance and this will be it. Another classic from Clowes, I hope that I like it.
Gwen: This looks kind of cool. Not sure about cigarettes inspiring ayone to superhero-dom but this book definitely looks to be worth a shot.

Daybreak HC by (W/A) Brian Ralph
You wake up in the rubble and see a ragged, desperate one-armed man greeting you. He takes you underground to a safe space, feeds you, offers you a place to sleep. And then announces that he'll take the first watch. It's not long before the peril of the jagged landscape has located you and your newfound protector and is scratching at the door. What transpires is a moment-to-moment struggle for survival - The Road meets Dawn of the Dead. Daybreak is seen through the eyes of a silent observer as he follows his protector and runs from the shadows of the imminent zombie threat. $24.95 Visit Ralph and see his comics work here. http://bralph.com/comics.html
Lee: This is an old collection of stories that were published back in the early 00’s. In the story, you, the reader, wake up and encounter a one-armed boy (OAB). He introduces you to your world and let the adventures begin. It isn’t breaking the 4th wall so much as including you in the adventure. Or, it's 100% breaking the 4th wall for the entire story if you want to be picky.  The OAB speaks to you and shows you things as if you were really there. It’s a great concept which is perfectly executed.
Gwen: What a cool way to draw the reader into the story :) 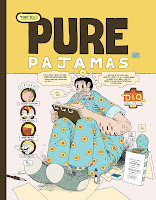 Pure Pajamas HC by (W/A) Marc Bell
Pure Pajamas collects Marc Bell's best material from his syndicated weekly comic strip for the Montreal Mirror and the Halifax Coast, as well as a host of anthologies such as Kramers Ergot, Expo, Maow Maow, and more, featuring his recurring characters Kevin, Ol Simp, Chia-Man, Mr. Socks, and Shrimpy and Paul. Throughout Pure Pajamas, Bell creates symbiotic relationships within his fantasy ecosystems, drawn in a rubbery big-foot style. 9 x 11”, 96 pgs, $22.95. Visit Marc Bell here.
Lee: I like Marc Bell's art and I love the weekly strips in alternative papers. Not that I always understand them but they are always interesting. It's oversized so the pictures should look really pretty.
Gwen: Again, strip comics don't hold that much fascination for me. Well, with the possible exception of Calvin and Hobbes which I loved reading as a kid.

D. E./Dynamite Entertainment
Charlie Adlard: Curse of the Wendigo SC by (W) Mathieu Missoffe (A/C) Charlie Adlard
From the New York Times Bestselling artist of the Walking Dead hit series comes another horror classic! July 1917. The night air is rent by sentries' screams. Everyone thinks it's a trap laid by the enemy, but soon they hear screams from the German lines. Both camps are obliged to declare a truce and send a team of men, French and German, to solve the mystery. With them goes Wohati, a Red-skin, one of the 12,000 Indians in the U.S. Army. And probably the only man who knows what's out there, lying in wait. Illustrated by Charlie Adlard (The Walking Dead), this is the story of a strange phenomenon to strike the French and German trenches. Their only chance: to unite, and survive, the Wendigo! 48 or 64 pgs, there are differeing reports. $7.99
Lee: This certainly looks interesting. This was originally published in France, and is now being translated into English. I am surprised that DE is getting into the euro reprint market but I am all for it. I’m betting this will be good.
Gwen: The art should be good at least - I'm not familiar with the writer. Worth a look.
Short month, so the conclusion tomorrow...
Posted by Lee at Tuesday, July 26, 2011