Well, the slog through the DCNu is done, and we all survived. Ok, most of us. We lost Greg somewhere along the way. Now it's time to go back to talking about books that have actually been published and read.

My recent foray into The Uncanny X-Men's "Days of Future Past" story reminded me of how much I enjoyed those stories from 30 years ago. And, while I've read bits and pieces of the original stories that started with Giant Size X-Men 1 and went forward with X-Men 94, I never read the complete stories. I didn't start reading the title until a few years later and only acquired back issues going back to 122.

Then, lo and behold, Cards, Comics and Collectibles had a 50% off trades 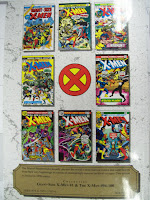 and HCs the weekend of July 4. Seizing my opportunity, I picked up Marvel Masterworks Vol 11, reprinting in trade Giant Size X-Men 1 and X-Men 94-100. I also picked up Vol 12, but I'll go into that one another day.

Having had much of my brain's capacity for knowledge syphoned away in child rearing, I had forgotten that Chris Claremont wasn't the originator of this recreation of a moribund title. Maybe it's the fact that I primarily associate Len Wein with horror oriented titles like Swamp Thing, but I'd forgotten this was his baby, along with artist Dave Cockrum.

Hard to believe that in a mere 68 pages, Wein and Cockrum put together the team that, in my mind, remains the essential X-Men. Colossus, Nightcrawler, Storm, Wolverine and Banshee joined Cylcops, along with Thunderbird and Sunfire, to rescue the original team of Iceman, Angel, and Jean Grey from Krakoa, the living island. Ah, the days when radiation was still a tool for creating fantastic mutations instead of just painful death.

Of course, after the rescue Sunfire, horse's ass that he is, takes off for Japan, having no interst in 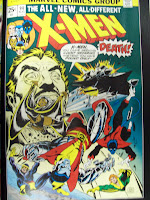 helping anyone outside Japan. Jean Grey, Iceman and Angel also decide to retire and move on to lives outside their adolescent status at Xavier's academy. Thus, the team is the core group who would remain for several years - Cyclops, Storm, Nightcrawler, Colossus, Wolverine and Banshee. Thunderbird also remains, but I suppose the cover to issue 94 should have been fair warning to him that he wouldn't last long. He's the only one on the team who's face doesn't appear in the little upper left area on the cover. Naturally, he's dead by the end of issue 95. 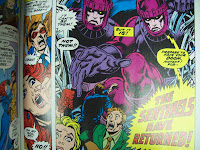 From there the stories move on to a battle with a demon called Kierrok the Damned in issue 96, which also has the arrival of Moira MacTaggart as housekeeper and set in motion the return of the Sentinels in issues 98-100. Issue 97 has Havok and Polaris, under the influence of Erik the Red, attacking the X-Men, all of which leads to the introduction of the Shi'ar and Princess Lilandra to the X-Men world. That wouldn't be developed further until issue 101, though. 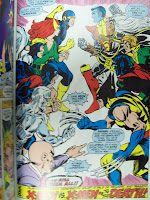 A large chunk of the story is leading to the creation of Phoenix, who first appears in issue 101. At the end of 100, though, it appears that Jean Grey is going to die as she pilots a shuttle back to Earth during a peak in solar activity. She and the X-Men were on a space station fighting the Sentinels created by Stephen Lang, some of whom looked just like the original team.

Wein continued to work with Claremont in issues 94 and 95, and taken with Giant Size X-Men 1, these three issues marked a turning point in super hero comics. Not that this is news, but it's easy to see why, now. There was nuance and depth behind those brightly clad, unbelievably powered, often conflicted heroes. Wein and Claremont took a team of perpetual teens who belonged to a persecuted, if largely unnoticed, class of humans, and replaced them with an international, older team who were more comfortable with their abilities but less able to work as a team.

Into that Claremont quickly developed plot points that would engage for years to come. The romance between Jean Grey and Cyclops was out in the open. The creation of Phoenix was imminent and would alter the Cyclops/Grey relationship forever. The development of the Shi'ar as sometimes allies, sometimes foes, particularly with the Imperial Guard, who so resembled both the Legion of Super Heroes and the Justice League. The first real development in Cyclops's origin, particularly the return of his father, would be quickly added. Moira MacTaggart was created and quickly became an important associate of the team. And the persecution of the team just for being mutants was ramped up. 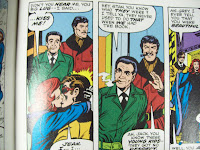 I had forgotten or not known some smaller points, such as that Wolverine's claws being a part of him rather than something that was hidden in his gauntlets was not known initially. The cameo of Jack Kirby and Stan Lee was a nice touch, and an acknowledgement of the new direction of the book, as well as a tacit approval. 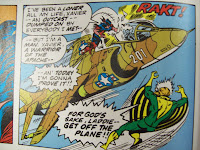 It wasn't perfect, of course. Thunderbird was kind of ridiculous in his attitude about "white eyes", not to mention the jargon he used. The most unbelievable part of his story to me was his death. I get that he was supposed to have this huge chip on his shoulder that caused him to stay on Count Nefaria's stolen plane, beating the canopy into submission, but he didn't seem to be suicidal prior to that. Beyond that, why does Banshee just fly alongside, impleading Thunderbird to jump clear. Why not swoop in and pull him clear?

Ah, well. Nothing's perfect, least of all in corporate character owned comics. Granted, Marvel didn't care much what Wein and Claremont were doing with these characters at the time. The book was barely surviving, having been just putting out re-prints before Giant Size X-Men 1. Obviously, this was the source of the level of creativity involved with the book, and a very good thing indeed. Of course, it also explains the later stagnation of the title. Success killed it so that it's naught but a convoluted mess that tries to foist the appearance of new stories while continually recycling concepts that have gone on before, all the while leaving behind the personalities of the characters originally developed by Wein, Claremont, Cockrum, and later Byrne, so that they're either caricatures (a la Wolverine) or entirely removed (a la Cyclops [Jean Grey who?]).

I'm going to enjoy getting the remaining trades that catch up to where I started with singles, I know. Now I just need the next big sale to come around to do so.
Posted by Thomm at Sunday, July 17, 2011