Indies Previews for June Part 2 of 2 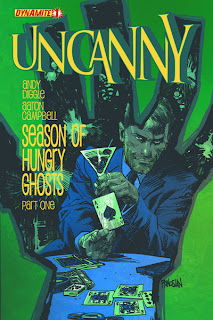 Dynamite
Uncanny #1 by (w) Andy Diggle (a) Aaron Campbell (c) Dan Panosian
For comic fans that pre-order a copy, you can receive an exclusive Dan Panosian cover! This super-special variant is limited to initial orders! SIX BILLION SKILL SETS. ONE LAST CHANCE. Weaver is unique, or so he thinks. Born with an uncanny ability, he can steal other people's skills - their memories, abilities, and expertise - for a limited time. A man with a power like that could change the world; but as a professional gambler, con-man, and thief-for-hire, Weaver prefers to look out for number one. That is, until he finds himself drawn into a dangerous game of international intrigue where the rules keep changing, the players are hidden and the first thing he stands to lose is his life. And maybe, just maybe, he isn't so unique after all... 32 pgs, FC, $3.99
Lee: It’s the new Andy Diggle book. In actuality it’s probably a reprint of some of his 2000AD material but that’s ok. Based upon how good Snapshot is, I’m not missing this!
Thomm: Eh, a male version of Rogue. At least it won’t have the X-Men angst. 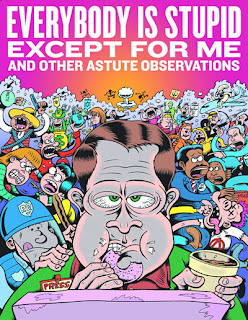 Fantagraphics Books
Everybody is Stupid Except for Me Expanded Edition HC by (w/a/c) Peter Bagge
Peter Bagge takes on the erosion of our civil liberties, the Iraq war, art and entertainment, the homeless, the drug war, and whether citizens should be allowed to own bazookas in this hilarious and provocative collection of independent-minded satirical strips from the pages of Reason magazine. No sacred cow on either side of the political spectrum is left standing in this new definitive hardcover edition, which adds over 30 new pages to the long sold-out first paperback edition. 156 pgs, FC, 7.75 x 10, $24.99
Lee: This is for you Thomm. Allllll for you.
Thomm: Oh, hell yeah. The title alone is for me. This is bound to be smarter than 5 of the idiots on the Supreme Court and all of the idiots running the House these days. 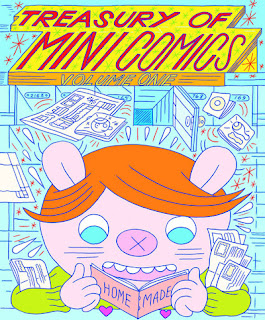 Treasury of Mini-Comics HC by (w) Michael Dowers
Inspired by the unexpected hit, NEWAVE! The Underground Mini-Comix of the 1980s, The Treasury of Mini Comics charts the evolution of mini comics over four decades. This first volume will collect some of the best work by some of the most creative DIY creators in the world. From bodily-function humor to EMO style poetry, mini comics creators have been uninhibited in their efforts to strive for something fresh, raw, and vital. 720 pgs, PC, 5 x 7, $26.99
Lee: Mini comics are a completely different world. They are good. They are bad. Some are even downright atrocious but I don’t think you’ll find those in this collection. If you like comics experimentation then you will love this. If not, I would stay away.
Thomm: Different I like. Whacko experimentation for the sake of experimentation, not so much. It’s a fine line. 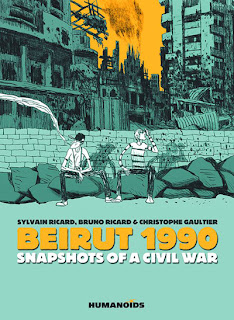 Humanoids Inc
Beirut 1990: Snapshots of a Civil War HC by (w) Bruno Ricard (a/c) Christophe Gaultier
In 1990, off to join an aunt working for a relief organization, young Frenchmen Sylvain and Bruno Ricard come to discover the ins and outs of everyday life in Lebanon's war-torn capital. More than a decade later the brothers recount their experiences with the help of artist Christophe Gaultier, as inspired by the real life pictures taken by the pair on their journey of discovery. 160 pgs, B/W, 7.7x10.5, $29.95
Lee: I almost didn’t pick a Humanoids book this month but then I saw this. I’ve read a bunch of Joe Sacco’s journalistic tales from various war fronts and I’ve always enjoyed them so I am willing to give this a try. The real story of what happens to everyday people who still need to live in war zones is just incredible. It doesn’t get any more real than this so I’m sold.
Thomm: Not a lot of people remember Lebanon’s civil war, even though it was a huge event running through the ‘80s into the ‘90s, and still having vestiges today. At most there’s the occasional mention of the Marines being killed in Beirut. I’d very much like to see this personal narrative of that war. 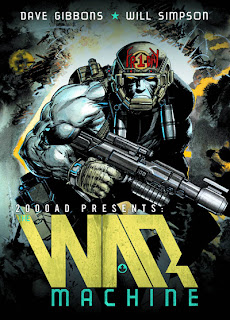 Rebellion / 2000AD
War Machine GN by (w) Dave Gibbons (a/c) Will Simpson
Dave Gibbons (Watchmen, Martha Washington) writes the story of genetically engineered super-soldier Friday. Artist Will Simpson provides the fully painted art. They are the best of the best. Alpha Company, first genetic infantry, have been created for war. Able to survive in the harshest environments, Friday and his brothers know how to obey orders. Fight hard. Die well. But as the sole survivor of a brutal massacre, Friday starts to question those who have made him this way, making his an uncontrollable war machine and the most dangerous create in the galaxy! 96 pgs, B/W, $17.99
Lee: This seems to be Gibbons re-telling the 2000AD Rogue Warrior story. Maybe it’s different, maybe it isn’t but I can’t tell. Gibbons is a decent enough writer and Simpson is a very good artist so I’m willing to take a chance.
Thomm: Not quite enough here for me to take a leap. I’ve seen this concept in various iterations other times. It’s a bit light on pages, too. 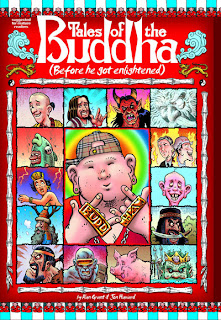 Renegade Arts Entertainment
Tales of the Buddha Before He Was Enlightened SC by (w) Alan Grant (a/c) Jon Haward
Just what did this holiest of men do before gaining enlightenment? The stories take an extremely lighthearted approach to the Buddha's journey of discovery as he samples other religions, hangs out with other religions icons, as well as experiencing life's more physical pleasures along the way. 80 pgs, FC, 7x10, $14.99
Lee: If you don’t see the humor in the description… just avoid the book now. As for me, I’m always up for some wicked satire so I’m ordering a copy.
Thomm: Humor and a certain amount of historical accuracy. The man who would be Buddha did make a varied search for his enlightenment. Looks good to me. 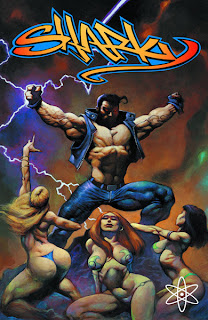 Titan Comics
Sharky HC by (w) David Elliott (a/C) Alex Horley
Sharky is the Earth-bound son of Odin and the grandson of Zeus - and he just hit puberty! All his life, he's been raised by his mom, with no idea of who is father was. Now he's hit puberty, only to discover that the no-good-S.O.B is none other than Odin! Whenever something sets off his hormones, he transforms into the demi-god Sharky, complete with a body The Rock would kill to have and the strength of a superman! 144 pgs, FC, 7x10, $14.99
Lee: I remember seeing this a very, very long time ago on the stands, back in ’98 or so. It’s got great art by Alex Horley but that’s about all I know. I think it’s kinda Lobo-ish more than anything else. But, it’s gonna look pretty and I am always tempted by pretty art.
Thomm: Hmm. I’m not so interested in it if it’s just pretty, but the concept is amusing. The Lobo-ish description is a negative, though. Lobo’s just irritating. 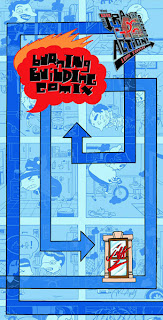 Top Shelf Productions
Burning Building Comix HC by (w/a/c) Jeff Zwirek
Presented for the first time under one cover and in full color, Burning Building Comix is a comics art object and reading experience like no other. The innovative format of this book allows readers to follow the plight of the trapped tenants in a ten story burning apartment building, with each tier of panels representing 1 story in the building. Distributed by Top Shelf Productions. 40 pgs, FC, 6.25x12, $19.95  You can read previews here.
Lee: This sounds really cool.  It's an oversized book so there should be plenty to read.  The previews are very interesting but I can't help but feel they aren't doing the story justice.  It's worth checking out.Thomm: Well, the concept is certainly interesting. I don’t know if it works in execution as well as it seems to in concept. At 50 cents a page it’s a bit of an investment.


Thomm: Good variety this month. Once you get past the love offerings to Jim there’s a lot to consider here. Actually, even the love offerings are good. Beirut 1990 looks like the best bet to me.
Lee:  As always there is a lot of good stuff.  There were more single issue that really interested me.  That hasn't happened in awhile.