Considering how much time passes between these trades, and the glacial pace of the story, I tend to remember a lot of the plot line and characters in these books.  Truants is the most recent collection of Morning Glories, the spooky/creepy/unsettling story of a private academy and its uncertain mission that spans centuries.  I'd say its an "ends justify the means" story except I haven't any idea what the ends are yet.  Twenty-five issues into the story and almost three years since the first issue came out, it's still a mystery. 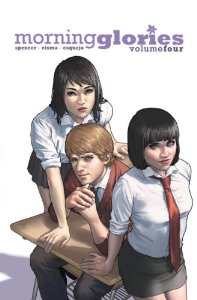 We've taken a right turn of sorts through these six issues.  Our original focus on the six new students at Morning Glory Academy has shifted to an earlier group of students who were sent as moles to undermine the academy.  The original six (well, the five that are still alive) make some appearance in this arc, but not much.  In fact, it's really only two of them.  The other three aren't seen much at all.  Spencer, Eisma and Esquejo fill in the back story on this other bunch and have them duking it out with the school adminstration in current time.  Much murder and mayhem ensues.  We've thrown in some time travel again, too.  The most significant development is learning more about the background of Daramount and Hodge, as well as some unexpected machinations.  Oh, one of our favorite villains among the staff bites the dust, too.

Spencer has said one of the inspirations for the book is Lost.  I don't have the hatred of that show that Jim does, but by the end of its run the creators and writers had some difficulty in wrapping up the huge number of story lines and time jumping they'd created.  Time travel stories have a tendency to bring that about.  I hope Spencer has a clear goal in mind and a firm grasp of how to get there, but he has just about as many balls in the air as Lost did.

If nothing else it remains a beautiful book to look at.  I'm not at the point where Lee is with buying books for the art, but it certainly helps keep my interest here.  If the art were of a lesser quality I'd be more inclined to let this one go, but the story is just interesting enough and just tight enough that I have some hope for a good conclusion, eventually.  I might be retired by then, but eventually.  Since Spencer says it's planned for about 100 issues, and we've taken 3 years to get this far, I'm guessing about 9 more years.
Posted by Thomm at Friday, June 14, 2013