Supergirl and the Legion of Super-Heroes #24 - A Review 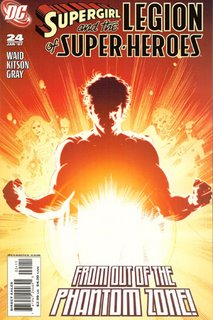 Premise - In an effort to help Supergirl with her problems the Legion has taken her to Kandor (the former bottled city) for help, with plans of leaving her there. While there the Legion of Super-Villains attempts to steal items from the Krypton museum and a battle ensues. Mon-el is reaching out to Saturn Girl as he is trapped in the Phantom Zone.

1)The writing is fantastic. We finally have a Legion of Super-Hero book that I really love again. It has taken awhile to establish itself (which with a large cast is necessary), but now that we have; this is shaping up to being on par with the Levitz/Giffen run on the book. Waid has given us a reason to accept the old time names of the characters so you instantly know who does what and has infused each character with their own identity separate in may ways from any other incarnation. The use of Supergirl is brilliant also. One of the great charms of the Legion in different times was having a current time frame (usually Superboy) hero in the mix. I love this Supergirl better then her 21st century self. The fight scene when Supergirl tries to pretend she has her powers (as under a red sun, where they are, she doesn't) and then via Cosmic Boy's direction proceeds to defeat the bad guys using the weapons in the museum was terrific. Brainiac 5's using Dream Girl in his head to predict stuff, while confusing the rest of the team is also a great touch. Waid gets so much story into these few pages it is amazing, background on Kandor and their society, the Mon-el mystery, the fight scene in the museum, Supergirl being brought back with the team, the communication with Mon-el via the Saturn Girl and Phantom Girl merging of powers, the Legion of Super Villains being defeated and their massive retaliation, the Legion election and the interplay between Lighting Lad and Dream Boy. All in 22 pages - a fantastic job.

2) The artwork. When Kitson does the full pencils the book is in its full glory. The inks by Mick Gray really seem to work well with Kitson's pencils. Good layouts and really good depiction of a lot of different characters. The colorist must go nuts having to remember all the uniforms and who gets what colors.