I have to say, I've had an incredibly stressful beginning to spring break. So I thought I'd lighten things up by revisiting an old Legion favorite. That's right, it Sun Eater time!


The first time the Legion encountered a sun eater was in "To Save a Galaxy" (Adventure Comics #353). Superboy, Cosmic Boy, Sun Boy, Ferro Lad and Princess Projectra were the only Legionnaires on Earth when they received word that a sun eater was headed for Earth's sun (the rest of the team was in dimension QK-51). Due to the fact that no other hero in the galaxy would come to Earth's aid the Legionnaires were forced to seek the aid of the Fatal Five! 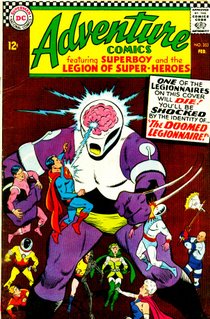 
The Persuader is essentially a high profile mercenary and enforcer. His primary weapon is an atomic axe which can slice through anything by using nuclear emissions. He is also extraordinarily strong and tough, making him a formidable opponent.


Tharok's story is an incredible one. Thanks to Zadronian medicine Tharok's life was saved after half of his body was atomized when a bullet hit a N-Bomb Tharok had been attempting to steal. The destroyed half of his body was replaced with a crude robotic replica, giving him new strength as well as significantly increasing his intelligence by linking it with a computer brain. Tharok swore vengeance against lawmen everywhere, for it was an officer who had inadvertently made Tharok into only half a man.


Sarya of Vengar found an ancient artifact amongst the ruins on her home world: the Emerald Eye of Ekron. Realizing that the eye had significant power she swiftly seized power of Vengar declaring herself the Empress. She was, however, overthrown when the people rebelled against her tyrannical rule. After that she travelled space murdering and stealing planning to one day raise an army to regain her throne.


Validus is a creature of incalculable power and strength. He is so powerful it has taken the combined strength of Superboy, Mon'el, and Ultra Boy to subdue him. He doesn't seem innately evil but he is easily pushed into madness causing him to go on unthinking rampages.


Mano was born on the planet Angtu where the environment's toxic gases caused an unusual mutation. Mano was born with a strange glowing hand that possessed incredible destructive power. Once his parents died Mano destroyed his home planet and began travelling the galaxy as a hired assassin.


When the Legion began seeking out the Fatal Five these villains had never before met. By the end of their endeavor the Legion would have succeeded in bringing together five of the most dangerous outlaws in the 30st century.

As the Sun Eater rapidly approached Earth each Legionnaire available flew off in search of one of the Fatal Five. Cosmic Boy found Tharok in his Citadel of Evil (no, really, he had one) being attacked by the Science Police. During a lull in the battle Cosmic Boy managed to make his way to Tharok's command center. Having gained the evil man's attention Cosmic Boy proceeded to plead his case. Cosmic Boy managed to recruit Tharok, but only because Tharok felt that defeating the sun eater would be a worthy challenge for his genius.

Suffering satellites! Superboy finds the Emerald Empress on the primative world of Craggok being burned at the stake! After performing a heroic rescue Superboy is quickly laid low by the Emerald Empress who just happens to have Kryptonite in a lead lined pocket in her cape. (readers please note that in the 30th century not only was it a common practice to line pockets and masks with lead, but Kryptonite was readily available practically anywhere - in fact sometimes it would just fall out of the sky). Despite having defeated the boy of steel the Empress decides to help the Legionnaire's cause.

Meanwhile on Planet Bismari...
Sunboy has been sent to retrieve Validus before is impending execution. After a quick tussle in which Sunboy is easily shrugged off by the mysterious Validus, Dirk manages to convince the prisoner to help defeat the sun eater. Even Validus understands the difference between going with Uncle Dirk or being executed.

Princess Projectra was assigned to recruit the Persuader to the cause and managed to find him on the twelfth moon of Jupiter. After freeing his hostage Projectra used her feminine wiles to persuade the Persuader. (It always seemed the Projectra and Dream Girl could convince just about any man to do anything...)

Ferro Lad, the hero of our story, managed to find Mano right before his destructive hand was cut off! Barely destroying the guillotine in time Ferro Lad has to convince the Science Police to release Mano to his keeping. Luckily the SP intercoms pick up the frequency of Ferro Lad's transmitter and he lets them know that he's a Legionnaire. Once Ferro Lad takes Mano into custody he begins his trip back to Earth.

Back at the clubhouse

Tharok has the rest of the Fatal Five demonstrate their abilities (which ends up as a super powered bar brawl before Validus gets angry). Tharok then retires to form a plan. Meanwhile we learn the Emerald Empress' plan for reclaiming her throne - using Kryptonite to convince Superboy to do it for her! Luckily Cosmic Boy interrupts her scheming to call everyone together to hear Tharok's plan. 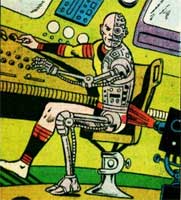 Tharok plans to lure the sun eater down a false path by using Sun Boy as a decoy sun. Once the sun eater is diverted the Persuader is expected to cut it into eight parts so everyone else can take on smaller parts individually. Of course the plan won't work because the Five and the Legionnaires aren't quite powerful enough. Tharok's solution is to use anti-energy to give everyone a temporary energy boost - of course during this procedure he implements a plan of his own - by using the procedure to put Validus under him mental control!

After boosting both the Legion and the Five's powers Tharok arranges to secretly meet with the other Five. That night Tharok shows off his new found control over Validus and convinces the others to join with him - so that after the destroy the sun eater they can take out the Legionnaires and then conquer the galaxy! 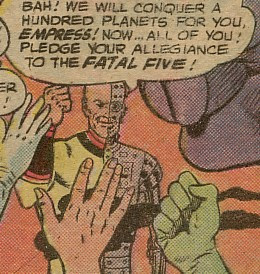 That morning, the Five and the Legionnaires begin the enact Tharok's plan!

Sun Boy puts all his energy into becoming a "sun" to lure the sun eater away from the actual sun it was heading towards. The plan works... so far.

The Persuader uses his Atomic Axe to cut the sun eater into smaller pieces for the rest of the crew to deal with individually, and hopes that the others with be able to prevail. So far the plan has worked... but then both Validus AND Superboy fail to stop the immensely powerful creature and Tharok himself acknowledges that there is little hope of success if the mightiest have been defeated so easily.

Cos actually puts up more of a struggle than Superboy, but he too is defeated. Even the Emerald Empress and the Eye are beneath the creature's notice.

Projectra creates an illusion of blinding light to try and lure the sun eater in many directions at once - and it works! - but too slowly. Just as the creature is about to consume Projectra, Validus saves her! Projectra brings the wounded Validus back to the ship.

Mano manages to destroy bits of the sun eater, but it senses his weakness - he only has one hand! The sun eater attacks him from every side, and Mano falls, defeated.

Ferro Lad, knowing that he and Sun Boy are the last one's standing, dares what no one else would - he plunges headfirst into the sun eater. Even though his iron body becomes white hot he keeps going further into the creature - and finds himself at the core of its life force! But just as he realizes that he has the perfect chance to destroy it the sun eater attacks and Ferro Lad is thrown back into space. 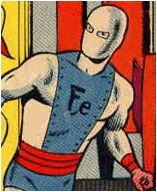 It looks as if the plan has failed - and with it the hopes for saving the galaxy!


This is, of course, leads to an alternate plan - using a bomb to blow up the suneater - the only catch is someone has to fly the bomb into the creature. Superboy tries to go but Ferro Lad manages to save Superboy from sacrificing himself by taking the suneater on himself. Ferro Lad does destroy the suneater with the bomb but he loses his own life in the process.


There's more to the story (such as more Fatal Five!) But as this story had been republished I'll just suggest that you go out there and become a Legion fan ;)
Posted by Gwen at Saturday, March 14, 2009