This seemed like a light week and nothing really jumped out at me as being excellent. Still, there was some moderately good reading here. I won't be posting next week as I be in Indianapolis at Gencon. When I return I'll post a report on the convention :) 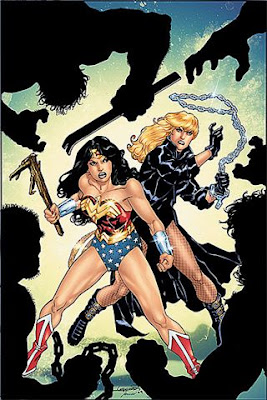 
It's odd but Black Canary didn't seem all that much like Black Canary in this issue. This is odd to me since Gail Simone wrote such a great Black Canary in Birds of Prey. She just seemed off in this issue somehow. Either way this was a mediocre issue at best though Dinah's closet of disguises was somewhat amusing. I'm more interested to see what will change with Diana as she adjusts to her new life. 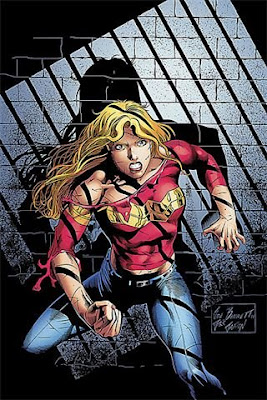 
So who's betting they kill Eddie? Or they're going to kill someone completely insignificant even though they were trying to set us up with the opening coffin scene. Eh. Either was Teen Titans doesn't really feel like Teen Titans right now. I hope they stick with the team the way it is for a good amount of time as this book has been reworked entirely too often as of late. If the team is more settled I think the book with come together more easily.

I liked the Ravager backup story. I have been enjoying all the backup stories actually :) 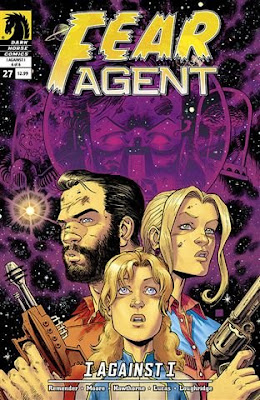 
Can things get any worse for poor Heath? I mean seriously this guy cannot catch a break. As much as I enjoy this series I think it needs some balance. I mean not everything has to be horrid and terrible. I mean was it really necessary to turn his daughter and ex wife into cyborg things? Or are his real wife and daughter elsewhere? Or is it all some sort of twisted dream? This book is fairly insane and sometimes that's what makes it work. This current development was a bit much for me. 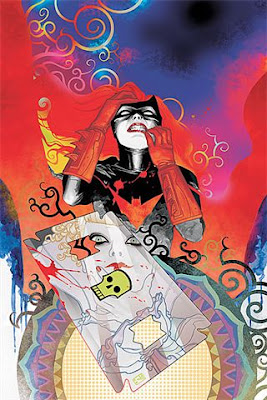 
I know that Jim really likes the art of this book but it's a bit too eerie for me. The color work is cool with one exception: Kate's skin. Why does she look like a vampire? I understand that the colorist is trying to show some sharp and vivid contrasts but unless you're undead you don't have grayish-white skin. I love the red hair effects though. Story-wise it's okay so far. Alice is an interesting addition and I'm intrigued enough to want to see where this all goes. 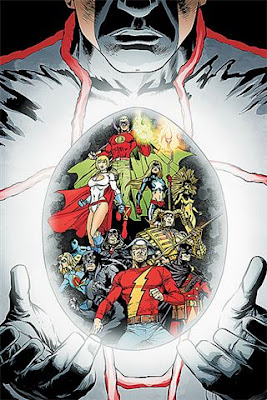 
Obsidian is an egg? Okay.... sure. Regardless this wasn't a very strong issue - mostly it was confusing. There was too much happeneing at once. Willingham and Sturges could be a good team but I wasn't impressed. With a team this big you need to look at stuff like successful runs on the Legion of Superheroes. While you can have multiple storylines going on at once it's not a good idea to overwhelm your readers.
Posted by Gwen at Saturday, August 08, 2009