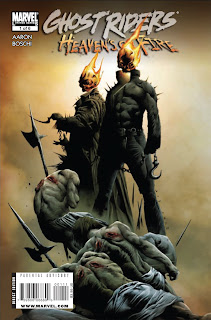 Jason Aaron does the best Ghost Rider that has ever been done. Now I have not read every version of Ghost Rider over the years, but the fact that Ghost Rider is a character that a lot of people even mention or care about at all anymore is due to Jason Aaron. This is his final arc on the character and most likely my swan song on reading the character also. To do it up right Marvel cancelled the Ghost Rider series and re-launched it after a couple month hiatus as a mini-series. To give Marvel and Aaron credit I believe you could jump into the story easily at this point and just continue on for the ride. Both art and story made this a solid read.

Now before I get into some of the particulars of the story let me get into the thing that make me just go ballistic from Marvel and takes away from my enjoyment of the project and that is the $4 price tag for 22 pages of story and art. Oh they added a lame a** reprint of Ghost Rider #1, but not even the full issue, just 9 pages of it as they are stretching the reprint over a few issues. I guess they can tell us it was more bang for the buck, but at least DC gave me a 10 page co-feature like Metal Men for their new launch and not this crap. Over the course of six issues that is $6 extra dollars for crap and it does not make me happy. Another little irritation is the title of the comic. Heaven’s on Fire is the title; I have seen it solicited as Heavens Fire. The possessive use with On Fire annoys me and I’m so far from being a grammarian as not to be believed, so if it is annoying me what are you doing to the grammarians that are out there.

This story starts with the Son of Satan, drawn so differently as to be a little off putting, finding out that a possible anti-Christ is on the loose from a monastery that was trying to breed one. If he is not found and protected Zadkiel could win the war to become all powerful (and create a rock he can’t lift, old joke about God). Next we find Sara and Johnny Blaze getting into a fight as they are trying to find a way into heaven to go after Zadkiel. We get a great fight scene and Johnny and Sara go looking for the Anti-Christ also, they wind up in Garth Ennis’ Avatar book about Wormwood. Not really, but it would be funny. I got a laugh out of them checking Vegas and Washington DC before going to Wall Street. We then find the Anti-Christ with the worse cover identity ever as an investment banker with the last name of Satan. He is being pursued by some of Zadkeil’s boys. Satan Jr. is saved by some heretofore unknown hot occult terrorist named Janie Cutter for a brief second, then the bad guys have both of them cornered. Finally we cut to find a group of bad guys working for Zadkiel being pulled together to take out Johnny Blaze. All set up to put most of the players in place and to get the story started as we play out the final arc. It has some great humor and builds up everything to make you want to come back for more. It is tying in almost all of the prior arcs to give the story a sense of closure.

The art is excellent and fits the book perfectly. First off we have a great Jae Lee cover, that while it depicts both Ghost Riders and Danny did not make it into the book yet, who cares. If a cover should sell a book, this one does it. The interior is by Roland Boschi. Now while I was not happy with his version of the Son of Satan, I love his layouts, light line work and at times almost a scratchy type of style that is full of kinetic energy. The fight scenes, the camera angles, the page design is all first rate and he really fits Jason’s Ghost Rider like a glove.

Overall Grade – B – An excellent start in what should be a great finish to Jason Aaron’s second best book, Scalped is NUMBER ONE. This should be a very good story with strong art; my hesitation to give it the “A” it deserves is the price point. A comic is a culmination of all the parts that make it up, writing, art, coloring, production, cover and price point. Let’s face it at $10 I would not even buy this, at $7 I would have passed, at $4 it gets a “B” at $3 without the reprint it gets an “A”