Jim: In some ways Image has become the solicitations that I look forward to the most. It is not for good reasons, but because they seem to have lost their way in what is their mission as a publisher. Every month I got to try and see what is what again. Lately they have picked some winners with Chew and Existence 2.0.
Lee: Image seems to be getting back on track but it’s still mostly miss for me. In an interesting comparison, DH has more gn’s and books, while Image had more floppies. I wonder who’s business model will succeed? 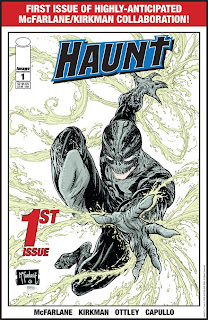 HAUNT #1
story ROBERT KIRKMAN art GREG CAPULLO, RYAN OTTLEY & TODD McFARLANE covers TODD MCFARLANE, RYAN OTTLEY (1:10) & GREG (1:25) CAPULLO(INCENTIVE COVERS: CAPULLO B/W COVER (1:50), McFARLANE B/W COVER (1:100))OCTOBER 7 32 PAGES / FC$2.99
McFARLANE & KIRKMAN'S HAUNT HAS ARRIVED!Daniel Kilgore is dragged into his estranged brother Kurt's secret life of murder and espionage... by his ghost. With no training whatsoever, guided by the spirit of his secret-agent brother, Daniel must now solve his brother's murder and save the world - or die trying! It all starts here, people: Witness the birth of HAUNT!
Jim: This is a tough one. I avoid McFarlane, but enjoy Kirkman’s independent work a lot. This will be a game (sale) day decision. Plus the premise sounds too much like a comic book.
Lee: The whole concept is ‘eh’ to me. But maybe Kirkman can make something of it. It worries me when there are three artists listed for a 32 page comic though. That’s never a good sign. 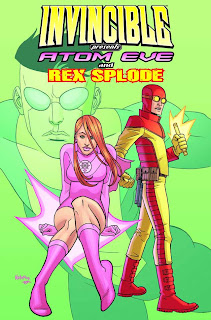 INVINCIBLE PRESENTS: ATOM EVE & REX SPLODE #1 (of 3)
story BENITO CERENO art NATE BELLEGARDE & BILL CRABTREE cover NATE BELLEGARDE & FCO PLASCENCIA edited by ROBERT KIRKMAN OCTOBER 21
32 PAGES / FC$2.99
Picking up right where the first ATOM EVE miniseries left off! See the secret origin of Rex Splode! See what shaped him into the man who tragically sacrificed himself in the Invincible War. Witness his first meeting with Atom Eve and learn their stunning secret!
Jim: So when they do a book that focuses on the hot chick why does Nate Bellegarde get the call? He is becoming a decent artist, but beautiful women is not his strong suit. Although the cover is not bad.
Lee: I’ll have to trust you on this. Maybe they should have called Jim Balent for art? 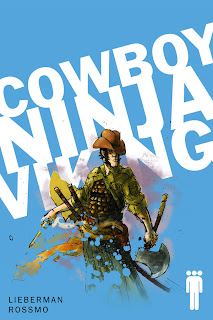 COWBOY NINJA VIKING #1
story AJ LIEBERMAN art & cover RILEY ROSSMO OCTOBER 7 32 PAGES / FC$3.50
It started with Dr. Sebastian Ghislain: rogue psychotherapist/covert op/DJ. Tasked with creating a counter-intelligence unit, he turned to those long thought useless to society...patients with Multiple Personality Disorder. These agents became known simply as Triplets. Misguided? Yeah. Impractical? Sure. But did it work? Absolutely not. Now someone has located each Triplet and created a band of ridiculously disturbed, but highly effective assassins. Our only hope? A Triplet known as Cowboy Ninja Viking!TAG: FROM THE ARTIST OF PROOF COMES A NEW SERIES PRESENTED IN THE GOLDEN AGE FORMAT!
Jim: This sound like a lot of fun, but what is the golden age format? Based on the solicitation it is not 64 pages, so is the book oversized or is it printed on really crappy paper?
Lee: I was wondering the exact same thing! What is Golden Age format? It might sell a couple more copies if people knew what it meant. 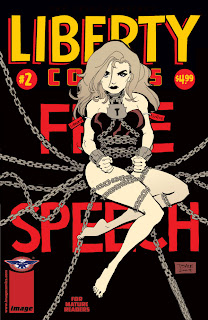 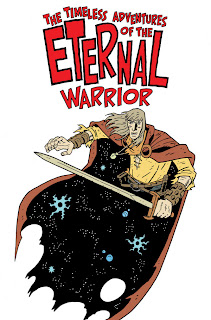 THE TIMELESS ADVENTURES OF THE ETERNAL WARRIOR (ONE-SHOT)
story PAUL GRISTart & cover PAUL GRIST CTOBER 7 2 PAGES / FC$3.50
The Eternal Warrior. He's the Cosmic Champion, a wanderer through time, forever caught in the battle between order and chaosThere's a woman called Bernadette who wants to be the Empress of the Universe, and she's just found the one thing that could help her achieve that. The only man who can stop her is the Eternal Warrior. And he's just arrived 10 minutes too late!
Jim: Geez, the premise does not sound like you can tell a whole story in a one-shot.
Lee: It’s Grist’s Dr Strange equivalent who’s been around in the Jack Staff series for a long time. This is a really bad solicit when it doesn’t even mention the series that it’s tied into. Cool character, good concept, not a jumping on point.
Jim: Well at least the solicitation makes more sense now. 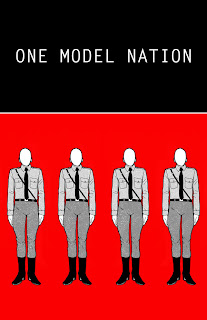 ONE MODEL NATION OGN
story COURTNEY TAYLOR art & cover JIM RUGG edited by JOE KEATINGE & MIKE ALLRED OCTOBER 28 144 PAGES / FC$17.99
In Germany 1977, music is violence.
As the country is still shattered from the devastation of war, the youth fight back against a repressed nation with their only figurehead of this violent, well dressed revolution to be a band later forever lost in time, Das Model.
Dandy Warhols frontman COURTNEY TAYLOR and Street Angel illustrator JIM RUGG bring you the complete story of Das Model, revealing just how they kick started the revolution that revitalized a country and mysteriously disappeared without a trace only months later.
Jim: Just because one musician wrote a quirky book (Umbrella Academy) does not mean all of these guys are all of a sudden great authors. I’ll wait for the reviews.
Lee: I’m with you. On one hand it sounds great and I’m tempted but not everyone can write comics. I’ll wait for reviews too. 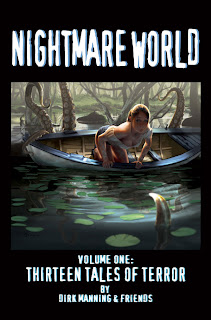 NIGHTMARE WORLD: 13 TALES OF TERROR, VOL. 1 TP
story DIRK MANNING art VARIOUS cover KRISTEN PERRY OCTOBER 14 128 PAGES / FC$15.99
"THIRTEEN TALES OF TERROR"Psychological horror in the vein of The Twilight Zone and Tales from the Crypt! In this first "definitive" collection of stories from the acclaimed online comic series, we delve into a world of ghostly lovers, demonic abductors, vengeful victims and sexy Cthulhu priestesses as these loosely connected stories weave an epic tale of a world not unlike our own where nothing is what it seems. Welcome to Nightmare World!
TAG: WRITTEN BY "WRITE OR WRONG" NEWSARAMA COLUMNIST DIRK MANNING, FEATURING RE-MASTERED ART, EXTRAS AND A NEW IN-CONTINUITY PROSE STORY!
Jim: Wow, the webcomic world has really come into its own this year with tons of stuff being published by various publishers.
Lee: Lots and lots of webcomics but are we just flooding the market with a new kind of marginal material? That’s no reflection on this book because I’ve never read any of it, but it’s a good question.

Jim: As I said Image is always interesting because you are never sure where they will go next.
Lee: And they went all sorts of weird places this month. That’s for sure.
Posted by Jim at Friday, August 07, 2009