Lee: I may not have had any great picks in Marvel-land but I’m back on track with Indies. As always, I find the indies far more exciting than anything from the big two.
Jim: Often I find the same thing, but I always blow hot and cold on the big two.

Archaia Entertainment LLC
Killer Modus: Vivendi #1 by (W) Matz (A) Luc Jacamon
Modus Vivendi, Part One. In Venezuela, the sanctuary where he withdrew from the world, the killer reappears on the scene. What brought him back? Boredom, fatigue, the need for action? His old friend Mariano recommends him for a quick-and-dirty freelance job. Remove one banker and one international oil broker, no problem. But why is his third and final target a nun, Madre Luisa - devoted, selfless, and invested in her ministry? $3.95, #1 of 6
Lee: The first Killer series was… well, killer. I’m sure we talked about ‘Killer’ before because it was that good. It’s an excellent crime story about a hitman who starts to break down. I’m sold on more of the same.
Jim: LOVED the first series and can' t wait for more of the same. Of course with this material and the publishers less then perfect record, I'll wait for the collected edition.

Boom! Kids
Life & Times of Scrooge McDuck Vol. 02 HC by (W/A) Don Rosa
BOOM! Kids proudly presents volume two of The Life & Times Of Scrooge McDuck in a gorgeous hardcover collection in a beautiful, deluxe package featuring smyth sewn binding and a foil-stamped case wrap! These stories, written and drawn by legendary cartoonist Don Rosa, chronicle Scrooge McDuck's fascinating life. See how Scrooge earned his Number One Dime and began to build his fortune! Collecting the last six chapters of the award-winning twelve part pic adventure. $24.99
Lee: What’s an indies preview post without a reference to Ducks? These stories are sooooo good. I have one tpb that was destroyed by the kids and a second copy that’s slightly dog earned because I read it more than once. And, last week I got the HC. This is great, great stuff. You know the best part? If you had kids that were getting married… for whatever reason… you could buy this NOW and read it to your grandkids later. Whenever you have Grandkids, that is.
Jim: Who is having grandkids? Not me not yet. The weddings of both daughters of this year, but no grandkids not yet. Stop trying to make me buy your ducks, maybe later. 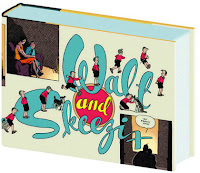 Drawn & Quarterly
Walt & Skeezix Vol. 04: 1927-1928 HC by (W/A) Frank King
In this fourth volume of Walt and Skeezix, the newly married Walt Wallet settles into domestic life with his wife, Phyllis, and their adopted son, Skeezix, but their family bliss is soon disrupted by a man who claims to be Skeezix's natural father. A long custody battle erupts, raising questions as to the importance of blood ties compared to a loving environment. Lavishly illustrated with Frank King's family photos, the book is elegantly designed by Chris Ware. $34.95
Lee: I know Jim isn’t a strip guy but these early Gasoline Alley reprints are fantastic. They are wonderful stories about people. This really is for fans of ‘Strangers in Paradise,’ ‘Love & Rockets,’ and all the other great slice of life comics.
Jim: Wow good sales job, makes me want to buy these collections.
Lee: Off topic, I need to upgrade my copies of Vol 2 & 3 so if anyone is interested, drop me a line and I’ll cut you a sweet heart of a deal so you can try them for yourself.

D. E./Dynamite Entertainment
Green Hornet #1 by (W) Kevin Smith (A) Jonathan Lau
The Green Hornet is back and Dynamite is the new home for the avenging hero and his faithful sidekick, Kato (and, the Black Beauty, 'natch!)! And we're kicking things off with a BANG as we launch the first of a new series of adventures starting with the great Kevin Smith. And let's get it out of the way, right here, right NOW - the scripts are in! Every single one! Joining Smith in bringing his unproduced screenplay to life is artist Jonathan (Black Terror) Lau as they present the one and only origin of the Green Hornet and Kato. This is the comic book version of Kevin smith's unproduced Green Hornet film and Dynamite is the only place to get in on the action - it all begins here! Look for Matt Wagner's Green Hornet: Year One and Brett Matthews The Green Hornet Strikes! In future issues of previews! $3.99
Lee: There are really two things to discuss here: (1) Kevin Smith & (2) the Green Hornet. Let’s start with Kevin Smith. I’m not sure his name is all that much of a draw here. His last couple of stories have been fine, maybe peaking at good, but certainly not much more than that. I’m not sure he’s all that much of a draw. As for the Green Hornet, does anyone care about him? I know there’s a movie in production but I don’t even know anyone who cares about that! My kids might know who the Lone Ranger is, but I’m certain they don’t know who the GH is. GH has become a minor league, pulp era hero. I’m sure someone is interested, I’ve just never met them.
Jim: The Green Hornet is very low on the radar and unless his movie is a hit I don't see this selling even with Kevin Smith as the writer. Also Kevin Smith has never written any comic that I can recall being anything special. 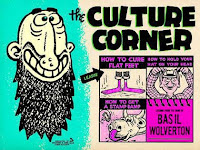 Fantagraphics Books
Basil Wolverton's Culture Corner HC
Did you ever wonder how to stop brooding if your ears are protruding? Or how to indulge yourself and snore without being a bore? Or for the masochists among you, how to sit on a tack? Or something as simple as how to get out of bed gracefully? Or something more challenging like how to boot a fly off your snoot? Or, if you're the violent type, what's the best way to kick someone in the teeth? If you're mystified by these conundrums, then we've got the remedy: cartooning madman Basil Wolverton's CULTURE CORNER, an indispensable guide to solving life's most worrisome and disconcerting social quandaries. This essential and complete collection is the first time these rare comic strip tutorials have been reprinted since their original publication over 60 years ago! Revered by aficionados, this quality publication also contains Wolverton's original pencil versions of each strip, carefully preserved, these doddle-drafts demonstrate a looser, more spontaneous interpretation of each finished strip. Don't get left on your cleft! $22.99 Someone actually scanned a bunch of these in. You can read them here
Lee: I’m a huge fan of Wolverton’s art and stories. Most newer readers probably don’t know him but luckily Fantagraphics is keeping his material in print. This collection reads like the ‘Basic Instructions’ web-comic, so if you like that, you’ll love this. Don’t look at the previews unless you have the money to buy the book because you’ll want it after reading them.
Jim: Fantagraphics is one of the best publishers, but often they produce material that I have no interest in. They produce niche material which you will either want or not want, but you are assured of a quality product. 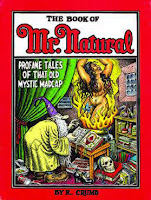 Book of Mr. Natural HC by (W/A) Robert Crumb
This new hardcover collection features over 120 pages of vintage Crumb comics starring the white-bearded, diminutive sage-cum-charlatan, ranging from charming, free-wheeling early '70s stories to the disturbing, controversial '90s stories (as seen in the Crumb movie), including the entire 40-page Mr. Natural and Devil Girl epic. Find out why Mr. Natural is probably the most famous underground character of all time! $19.99 You can read a six page Mr. Natural story here
Lee: I’m excited about this because it’s yet another easy way to get some Crumb into my collection. The sad part is this was originally solicited back in 2008. Not bad, it’s only taken 2 years to reach book store. Sigh! Oh well, it’s good material and worth the investment.
Jim: You are assuming it will be published this time.
Lee: So, just to point out how popular & influential Crumb is, did you happen to check the rest of the website out that had the comic? Uuummm, yeah, not even marginally related to comics. Very interesting and that’s being kind.
Jim: Crumb was the king of underground comix, what did you expect. 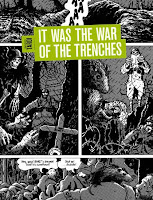 It Was War of the Trenches HC by (W/A) Jacques Tardi
World War I, that awful, gaping wound in the history of Europe, has long been an obsession of Jacques Tardi's. It Was the War of the Trenches is Tardi's defining, masterful statement on the subject, a graphic novel that can stand shoulder to shoulder with Erich Maria Remarque's All Quiet on the Western Front and Ernest Hemingway's A Farewell to Arms. Tardi is not interested in the national politics, the strategies, or the battles. Like Remarque, he focuses on the day to day of the grunts in the trenches, and, with icy, controlled fury and disgust, with sardonic yet deeply sympathetic narration, he brings that existence alive as no one has before or since. Yet he also delves deeply into the underlying causes of the war, the madness, the cynical political exploitation of patriotism. And in a final, heartbreaking coda, Tardi grimly itemizes the ghastly human cost of the war, and lays out the future 20th century conflicts, all of which seem to spring from this global burst of insanity. Trenches features some of Tardi's most stunning artwork. Rendered in an inhabitually lush illustrative style, inspired both by abundant photographic documentation and classic American war comics, augmented by a sophisticated, gorgeous use of Craftint tones, Trenches is somehow simultaneously atypical and a perfect encapsulation of Tardi's mature style. It is the indisputable centerpiece of Tardi's oeuvre. $24.99
Lee: I’ve gotten all the Fantagraphics Tardi reprints so far and they’ve been great. Now, adding a story about WWI into the mix is just bliss. If you haven’t gotten these yet, you are definitely missing out. This, and his others, are highly recommended.
Jim: This does sound interesting, Lee can you loan me one before I commit?

History Graphics Press
Civil War Adventure Vol. 01 GN by (W) Chuck Dixon (A) Gary Kwapisz, Enrique Villagran
History Graphics Press presents a new line of graphic novels dedicated to America's bloodiest conflict and defining hour. Join the 5th Virginia as it marches toward its first conflict at Bull Run. Ride with George Custer as his fabled cavalry faces impossible odds. Be a passenger on an armed riverboat as it drifts into range of waiting batteries along the Mississippi. Meticulously researched and supplemented with text material, maps and period pictures, these detailed stories bring the Civil War novice or aficionado into the action and allow you to view the events in a new and exciting way. $14.95 Visit official page, with lots and lots of previews here
Lee: OOOHHHHH, historical fiction! I love it. Add to the mix, a proven writer in Chuck Dixon, and proven artist Kwapisz of Conan fame and this is a no-brainer. I wonder how if Dixon will give us a character to follow through the various battles or just lots of little facts? Doesn’t matter either way because I’m getting this! Oh yeah, you should really, really check out the previews because the art looks even better than I imagined!!!!
Jim: This is another easy sell for me as I have come to love the historical fiction material also and with the creators on this book you know it should be a great production.