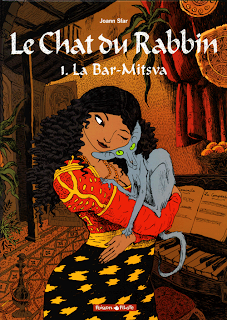 The Rabbi's Cat by Joann Sfar


I'd like to start off by thanking Lee for sending me this book for Christmas. It was an awesome gift not only because it was an enjoyable read but also because I probably would have never found this book on my own. Thanks Lee!


Basically the Rabbi's Cat is the story of a cat's life during his mistress' pre and post-wedding life. There is no real ending to this story as it just stops after Zlabya's honeymoon (Zlabya is the Rabbi's daughter and the cat's mistress). In fact the abrupt ending was my only disappointment in this book as I felt there was more story to tell. It was so good I wanted more! Of course there is a second book so I'll have to check that out at some point :)


At one point in the story the cat learns how to talk because he ate a parrot. I think that this is my favorite part of the book. Eventually the cat loses his speech (apparently for taking God's name in vain) and after that point the cat doesn't get to cause nearly as much trouble. While the cat can talk he convinces his master that he wants to have a Bar Mitzvah (because the Rabbi will not allow the cat around Zlabya because the cat may corrupt her) and the cat ends up in a debate with the Rabbi's mentor. It's pretty amusing how the cat seems to know more about the Torah than the Rabbi's mentor does and yet the cat is the one who claims that God is only "a reassuring myth". The cat has to agree to no longer speak around Zlabya in order to convince the Rabbi to allow the cat to be with Zlabya.


While the story here is interesting on it's own as a portrait of the Rabbi and Zlabya's life seeing it all unfold from the cat's perspective is a unique and fun way to see the events play out. Not only do you see the world from a different view point but because the cat can speak with other animals you also get other animal perspectives. The cat's elaborate tall tales also provide amusement and entertainment.


The art is very stylistic and while I may have been bothered by the art in another book it works great for this story. In the back of the book there's a picture of the cat the creator used for the art work and stylistic or not it's a dead on rendition. The impressionistic nature of the art works well in placing the reader into a different worldview and the cat's expressions are both easy to understand and catlike at the same time.


I'd recommend this book to pretty much anyone. I'd say it's even fairly kid friendly (perhaps more young adult) although some of the topics will probably mean more once you've spent some time debating theology.
Posted by Gwen at Friday, January 29, 2010