Hermes Press
Dark Shadows: Complete Series Vol. 01 HC by (W) Donald Arneson ; Arnold Drake (A) Joe Certa
The forerunner to today's popular vampire-themed television series and films, Dark Shadows still garners attention as one of the most memorable TV shows of the last forty years. As anticipation builds for director Tim Burton's big-screen remake of Dark Shadows, the time seems ripe to reprint the full run of 35 Gold Key comic books based on the show, first published from 1968 to 1976. These stories present tales of vampires, werewolves, and the supernatural. In addition to reprinting the stories, each volume is supplemented with poster art, pin-ups, and documentary material from the series. $49.99 You can read a story here
Lee: The irony that I am picking this after bashing Hermes for releasing ‘Land of the Giants’ last month, is not lost on me. I was wondering why this was was being offered until I learned that Tim Burton and Johnny Depp are working on an adaptation of the show. As for the comic, it’s got Arnold Drake of Doom Patrol fame writing and GA great Joe Certa on the art chores, so it should be better than average.
Jim: You think it would be better then average and I'll grant you it probably will be, but that does not mean it will be any good. Even a professional writer can only do so much with certain material.

Image Comics
Sam Noir Vol. 01: Ronin Detective SC by (W) Eric A. Anderson (A) Manny Trembley
Follow along with Sam Noir as he blazes a trail of blood and vengeance from the Far East to the deep tropics! Collected for the first time ever in one volume are Samurai Detective and Ronin Holiday including extras that no Sam fan can live without-now with 20 more stabbing! SIDEBAR: The sell-out hit miniseries and it's off-the-wall sequel in one volume for the first time! $15.99
Hawaiian Dick Vol. 02: Last Resort SC by (W) B Clay Moore (A) Steven Griffin
The Eisner-nominated series collected at last! In the second HAWAIIAN DICK collection, it's gangsters, guns and ghosts as Byrd is caught between warring gangs in a beautiful Hawaiian bay turned red with blood. Hailed by everyone from Entertainment Weekly to Publisher's Weekly, it's also being developed for film by New Line Cinema! $14.99
Lee: You know things are bad when the only thing from Image I can talk about are books that were completed 2-3 years ago. Neither of these books is new, but they are both very, very good. HD is more of a straight forward crime story, while Sam Noir is a mash up if samurai and seedy detective tales. They’re fun reads and worth the investment.
Jim: Don't forget Image is producing some great books like Cowboy Ninja Vikings, Proof, Jersey Gods, Chew, Invincible and Walking Dead. The rest maybe less than stellar, but the others are all great series.

Kodansha Comics
Ghost In Shell Kodansha Ed GN Vol 01 by (W/A) Shirow Masamune
In a futuristic world where the line between artificial intelligence and human consciousness is ghostly thin, a cybernetic investigator is called upon to solve a peculiar case of network crime and terrorism, involving a highly intelligent being that is not organic in origin. An influential story that dares to ask what makes a human being 'human' and what, exactly, is the soul? $26.99
Lee: Since someone complained not that long ago, I will state up front that this book isn’t a new release. But, it was oop for a long time! Anyway, this is one of the Manga’s that I never got around to reading and I’m only getting a copy now. It’s considered a classic so I’m sure it will be good.
Jim: I never read it, but I have heard nothing but praise from those that have read it.

Lightspeed Press
Finder: Sin Eater 10th Anniversary HC by (W/A) Carla Speed McNeil
Jaeger is a Finder, which is an aboriginal detective. Jaeger is also a sin-eater, which is a ritual scapegoat. Jaeger returns to an old girlfriend only to find that her husband isn't out of the picture and now appears to be dangerously crazy - but hasn't done anything to hurt her. But the husband isn't just some twerp; he's Jaeger's former commanding officer. This complex story of conflicting loyalties sets the stage for the rest of Jaeger's life as told in the ongoing series, Finder. Jump on at the beginning with this chunky manga-sized volume collecting two previous trades into one volume. $29.95 You can visit Carla here and check out samples and online stories!
Lee: Ok, I already have this book but I haven't read it yet. BUT, it does look really cool and I've heard really good things about it. Not to mention that I bought my copy from Carla herself at the last Baltimore Con. It's worth checking out.
Jim: OMG, this was the worst piece of crap I ever read. I saw Ellis and others praising it and I could never even finish the darn thing. If you find a redeeming quality in this book please let me know what drug you were taking while reading it.

Rebellion
Slaine: Demon Killer SC by (W) Pat Mills (A) Glenn Fabry, Cam Kennedy, Greg Staples
Slaine is summoned by the Earth Goddess to travel through time and defend the Britons from Caesar's legions at the side of warrior queen Boudicca. But the Romans are not to be underestimated, especially with Slaine's old foe, the demon Elfric, at their side! $25.99
Lee: In case you didn’t know, Slaine is Englands answer to Conan. I always liked Conan so a long time ago, I picked up one of the previous Slaine collections that was full of Bisley art. Needless to say, I loved it. Fabry does great barbarians, vikings, etc so I’m sure it’ll look great. I’m sold!
Jim: I agree this looks like a winner.

Simon & Schuster
Amelia Rules!: Tweenage Guide to Not Being Unpopular HC by (W/A) Jimmy Gownley
Meet Amelia Louise McBride. She's been forced to move out of Manhattan after her parents decided to get divorced, and is now living in a small town with her mom and her aunt, Tanner. Not to mention the fact that she's dealing with being the new kid in school. In Jimmy Gownley's first original volume in two years, Amelia and company rise and fall through the ranks of nerd, geek - and cheerleader? - in a daring attempt to not be unpopular. Available in Hardcover and Softcover editions. $18.99 Visit the Amelia-verse here and send Jimmy an email! He actually writes back.
Lee: I’ve talked about Amelia before and I wanna talk about it again. This is the latest hc collection of the series and I still highly recommend it. It’s great for kids and for adults and is one of the most overlooked comics out there. Don’t let the all ages tag scare you off, good comics is just good comics and this is one of the best.
Jim: It is funny all ages has come to be code for kiddie book. I classify an all ages book as a good story that anyone can read, not just a kiddie book. 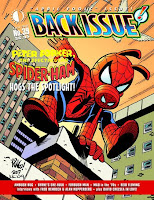 Back Issue #39
Back Issue ushers in Spring with some of comics' funniest April Fools! Keith Giffen and Robert Loren Fleming chat Pro2Pro about Ambush Bug, while John Byrne's She-Hulk smashes the fourth wall. Also: all-new interviews with cartoonists Fred Hembeck, Alan Kupperberg, Flaming Carrot's Bob Burden, and that indie man of heartache, David Chelsea. Plus histories of Spider-Ham, Forbush-Man, Reid Fleming - World's Toughest Milkman, MAD magazine in the 1970s, and Marvel's MAD knockoffs. With art by and/or commentary from David Boswell, Dick DeBartolo, Tom DeFalco, Al Feldstein, Al Jaffe, Stan lee, Dave Sim, and more! $6.95
Lee: I love this book! The Spider-ham cover is awesome and this brings back many happy memories of reading the original series. Just think, in 20 years, maybe Lockjaw & the Pet Avengers will get the cover.
Jim: Yeah if you beleive this magazine will still be published in 20 years I have a bridge to sell you in Brooklyn.

Lee: Another quality month for Indies with lots and lots to offer. Unfortunately, with more and more fancy hc’s being produced I’m spending more money than ever. My bookshelves look great but it’s killing my bank account.
Jim: Some of my shelves are bowing and I have to flip them from making it permanent, so I feel your pain.
Posted by Lee at Thursday, January 28, 2010