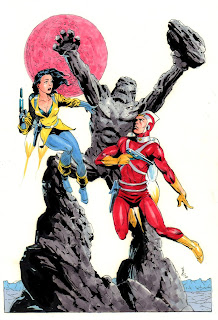 Adam Strange #10 has the big reveal that Adam in fact sold out Earth, lied to his wife to save Rann and I guess his daughter. It is a horrible scar to put on a character that was the thinking man's hero. Adam was always a hero that would do the right thing and he would have done right thing no matter the personal cost. This has cast him as a traitor and really someone who has no chance to be redeemed as his crime is about as horrific as it could be given the cost to Earth.

So what is the purposes of this story to show that some people given horrible choices make bad ones? That's fine but now you have taken a character that stood for 60 years as a cool hero and someone that I always loved and pissed on him and destroyed him to the nth degree. He is basically making him radioactive and irredeemable. Remember when Watchmen was being done DC stated to not use the Charlton characters as was the original intent  because DC was smart enough then to not to want to ruin characters forever that were fun and interesting.

King has insinuated Batman had suicide issues, that Mister Miracle committed suicide and has worked out I'm sure many of his own issues using characters from comic books. The problem I have is that the story needs to be front and center first. Instead the story is subservient to the message, which totally goes against good storytelling in my opinion.

I see way too many current TV shows that want to preach about some social injustice or woke political viewpoint. I have no qualms with making your political views knows in the context of the story. The problem is that character development and story telling take second place destroys the entertainment value. I buy your product to enjoy your story, see how a character reacts or grows and if a political point is made during the course of the story fine. Just preaching to me leads me to other forms of entertainment. Add to writers' preaching and you have many artists drawing books for the after market sales of the artwork. Way too many beauty shots and not enough story telling.

Finally I read a quote from James Tynion - who said "I like taking things I am afraid of and turning them into monsters for my characters to deal with. Batman and Joker deal with a lot of the things that scare me right now about society." For me this is a smoking gun. It is not I have a good Batman story to tell; it is I have some social issue I want to address and I will use the characters to make my point. No concern of it's consistency with a character; it is simply the writer inserting his point into what ever character he is writing.

It is a tougher search to find material I like from DC anymore, but I find plenty of stuff with books, independent comics and old collections to keep me amused.

For me woke has broke the big two.