Over the years my love of comics has continued but has grown and changed over the years. Sixty years ago I was in love with mainly Marvel comics and some DC.  The early Fantastic Four, Amazing Spider-Man, Strange Tales with the Human Torch and early Legion of Super-Heroes were my favorite. I was there for the stories and loved the marriage of words and pictures.

As time progressed, I went from being mainly a Marvel fan to being a DC fan. I think a big part of that was the Neal Adams / Denny O’Neil work on Batman. Art was a big part of that, but it was also the stories. DC’s emphasis on story grew my love of comics to make my focus more about the writers. Denny O’Neil, Marv Wolfman, Don McGregor, Chuck Dixon, John Ostrander and many more over the years were a key concern for making buying decisions. Art, no matter how good without a good story was an empty shell to me.

Of course, being a retailer for a few years in the 90’s changed my focus to how the business is run and how it all works together as a whole. I am not an expert but reading and being involved in comic my wealth of knowledge is greater than most people, but not as extensive as many harder core fans.

One hell of a long preamble to get to why I am reviewing the short lived 1975 series from DC comics. My love for comics has now morphed into a passion for original art. My meager collection of a few pages has grown to over 200 pages over the last five to ten years, with a huge increase in the last few years. Like any addict my addiction has gotten more costly over time. Where I hesitated to pay $200 for a piece of art that amount is now for buying a piece on a whim. My high-water mark has broken the $1000 barrier, but I expect to never break the $10,000 mark and remain happily married. As I got further into collecting original art I found out that some people have mind blowing collections of many thousands of pages worth more money then I can possibly imagine. 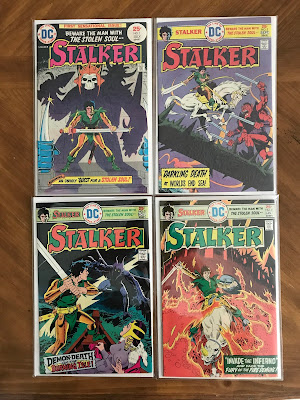 That love of original art has led me to appreciate two artists I always enjoyed and now enjoy even more. The two are Steve Ditko and Wally Wood. Stalker represents some of my favorite work by these two men. Ditko’s pencils appears to be hard to find the right inker on his work. Ditko’s style has never really been matched and I feel like many inkers did his work a disservice. Wally Wood when inking often overwhelms the artist and the work ends up screaming Wally Wood’s style. The pencil artist while responsible for the layouts and storytelling is often lost to Wood’s inks. Stalker is a marriage where both Ditko and Wood shine through at the same time. Ditko’s style is highly evident and Wood’s touches and deft inks and use of blacks are also just as evident. Outside of pure Ditko pencil and ink work or pure Wally Wood pencil and ink work – this art is a stunning example of the two men. One day I would love to own a page from this work, but right now only three pages are out there that I can find and are owned by collectors who are not parting with them. The cover for issue #1 sold for $15,535 on August 12, 2017, and I’m sure it would sell for upwards of $25,000 today.

All of that made me go out and buy the original issues again even though I have them in a collected Omnibus of Ditko’s work. The reason I went that route was it was cheap to pick up and often reprints are recolored. While the effort is to color them the way they were, technology and coloring has gotten so much better, the colors are often not quite the same or sometimes (Marvel Masterworks) are flat and garish.

The series is by Paul Levitz who was a very young writer at the time. He was given the assignment when DC jump into Sword & Sorcery books. Ditko and Wood were both unique and strong-willed individuals who accepted many assignments that in hindsight and given their talent you may wonder why they did the work/ It was simple they needed money. Comic artists were not highly paid and were contractual workers who received no benefits. They often never got the artwork back and the aftermarket for art was almost nonexistent at the time. So, the creative team was set, and we got four fun filled issues of the man without a soul.

For all intents and purposes, it was a mini-series / try out book to see if it was viable long term. This is based on the back matter in the book from Levitz. The story itself is not bad as we have a poor urchin wanting to have power in a world where he has none. After being betrayed by a person of power he made a deal with a devil for his soul. He felt the devil cheated him in their deal and fought his way thru that devil’s hell to reclaim his soul. He found out he could not get his soul back unless the devil died. The only way the devil can die is if he has no believers left.  The series ends with Stalker vowing to kill all the believers of the devil D’grth.

The story started with Stalker telling a Queen he would kill her in a year, as he blamed her for the deal he made with D’grth. She promised to train him as a warrior but instead made him a slave cleaning out stables and other such tasks. Then we flash back to how he made the deal with D’grth and have 3 issues of him fighting various creatures to get back to hell and try and get his soul back.

The story had tons of action and was set in a fantastical medieval style world with all manners of demons and other monsters. I do not know if the scripts were full scripts or more of an outline form, but given it was Ditko and Wood I’m guessing they were if nothing else acting as directors. They likely were following the story but making their own decisions on how to make said story work. If I was a better historian, I would search out Paul Levitz interviews and see what he said about the book.  The art was the true selling point as Ditko and Wood were still at the peak of their abilities. Some may argue that they were not as their earlier work was perhaps more detailed. I would point out the page rates being what they were I’m guessing they were cranking out a lot of work at the time as neither had any long term series they were working on.

Paul’s writing was not his best and oft times he overwrote the page instead of letting the art tell the story. The page with the 3 headed man is a perfect example where he could have backed off and let the art tell the bulk of the story. Paul certainly became a stronger writer over the years, and I thought he was a great asset for DC during his long tenure running DC with Jeanette Khan.


The concept itself has great potential for philosophical undertones discussing what is a soul and what does it mean to not have a soul. Plus given Stalker’s tracking abilities and warrior skills the action potential for the series is there. I swear with the proper writer/artist team this could be a great series today.

The bottom line this was and still is on second/third reading a fun book. It shows off a young writer, a great artist team and how coloring can sometimes mute great artwork.  Not the fault of the colorist, but the art in this case was so gorgeous the color could only hurt it. Plus there is no way in hell in 1975 that anyone was going to publish a black and white comic. Coloring is a funny thing as the technology and higher end paper have made the coloring better and better and better, but sometimes the pure back and white art is the best. I should write a column with my friend Tom Ziuko one day talking about coloring.

My review 4 stars out of five. The art carries the day, and the overall concept is loaded with potential.