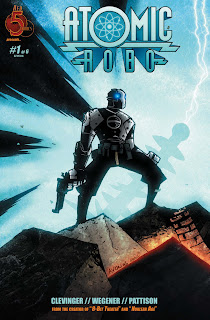 Theater", and art by Scott Wegener. Diamond Order Number: AUG073942
Atomic Robo is best summed up by the brief synopsis on the inside cover
“Nikola Tesla’s career is in its twilight until he unveils a robot with automatic intelligence – ATOMIC ROBO. Our story is the life of this singular being. From his youth spent with some of the greatest scientific minds of the century; to his days fighting in the Second World War; to his sometimes secret participation in the space program: to his role in the civil rights movement; to his ongoing efforts to defend Earth from all manner of catastrophe. Immersed in celebrity, super science, and politics literally from the moment he was brought online, ATOMIC ROBO offers a unique perspective on his world – and our own – from his vantage at the forefront of history”

I have to say that I like the concept. The sentient robot theme isn’t new by any stretch but having the robot partake in major historical milestones is a nice twist.
This issue starts in 1938, Atomic Robo is sent to fight an evil Nazi Scientist located the Himalayas. He fights a division of soldiers, then the Scientist who uses some secret evil scientist thingee to make himself strong, and blows up the hidden base in the end. Bottom line, the first issue is an extended fight scene with small bits of characterization through in. There was an equal amount of humor to balance the action and all sorts of teasers for future adventures.
What intrigued me the most was the fact that I could see future plots and adventures lining up. At one point, the evil scientist states “I did not bring ruin to an underground utopia pre-dating agriculture for the purpose of NOT gaining ultimate power over the fabric of reality.” This line really sums up the series. It shows there are lots of things going on in the world that people aren’t aware of and shows just how evil the bad guy is. It made me wonder what else might be out there and what other crazy adventures Atomic Robo could get into.
It is obvious that Brian Clevinger has been doing comics of some type. This is a typical exchange in which the hero, Robo, is battling nazi's. Crisp story telling and a good handle on some humorous dialogue. Click the pictures for full size....

The art by Scott Wegener is solid if unremarkable. It’s competent and workman like in composition. That isn’t an insult. Far from, in fact. For a first issue of a start up company to have competent art is an accomplishment in and of itself. The scenes are clear, you can distinguish one character from another, and it flows nicely. I could see influences that ranged from Mignola, Oeming, to the robot designs of Canete and D. Johnson. Is there room for improvement? Sure, unless your Jack Kirby or Gil Kane, there’s always room for improvement. 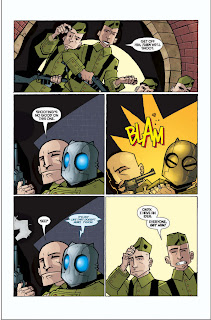 The weakest thing I saw was the coloring. At points, the bad guys uniforms were the same color as the good guys uniforms. But other than that, it was fine.
Overall, I have to say, not bad. Not bad at all. Will it change the landscape of the superhero market? Nope. Will it entertain you? Most assuredly! Is it worth coming back to see where it goes. It sure is.

Comments from other Comics And... contributors:
Jim says: An old concept, with a fun twist using Tesla as the inventor of the humanoid robot. The art had a good style, very light and more of a cartoon type style with good layouts. Will be hard to make this a long term success as the “human” robot has been done to death. Overall Grade B.

Gwen says:
This was a fun first issue. Normally I not a big robot fan, but not only was the art clean and accessible, but the writer throws you into the middle of the story without any confusion. After the writer's time on 8bit theater I expect that this comic will continue to be a lot of tongue in cheek entertainment.
Overall Grade B(+!)

The links:
Brian Clevinger’s webstrip "8-Bit Theater" can be found at, http://www.nuklearpower.com/index.php
You can see more of Scott Wegener’s art at http://www.scottwegener.com/
Of course, more back story than you can shake a stick at on Atomic Robo’s own site…
http://www.mechapolis.com/
And, finally, the publisher, http://www.red5comics.com/
Posted by Lee at Thursday, August 02, 2007