While Gencon is technically a gamer convention I still think it's relevant to talk about my trip on this blog. Gaming and comics go hand and hand in many ways and there was tons of comic related stuff at Gencon. 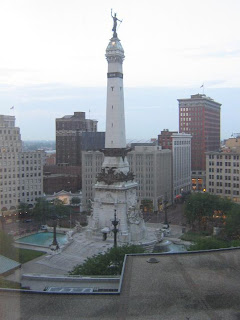 I was at Gencon Indy last weekend (8/16-8/20) with André (my boyfriend), Corey and Gary (friends of ours). This was all of our first times at Gencon, and while we had fun, we learned quite a few things along the way to make next time better.

André and I arrived at Indianapolis Airport around 9am. Despite the fact that the motel André and Corey had chosen was called “America's Best Inn at Indianapolis Airport” and also despite the fact that they had told us over the phone that they had a shuttle from the airport I spent $25 on a cab ride. Upon arriving at the motel we discovered that “Best” was a relative term. Not only were we surrounded by a truck stop, a greasy spoon Omelet Stop with flickering lights and

a strip club, but the hot water didn't work in the shower. We got the water fixed and headed out to the convention.

We had arrived to late in the day to do much at the con so André and I roamed the city for a bit. Indianapolis is a very nice place – clean and pretty. There was a comic book museum that we hope to hit next time we go out there - all our cab money was spent traveling to and from the motel ($20 each way) so we didn't have the extra to spend on a cab to the museum. After signing up for events the next day at the con André and I headed back to the motel to meet up with Corey and Gary who just arrived. The shower was broken again, but this time there was only a trickle of water. It took a long time to get clean. While watching TV the phone rang. André answered and a woman on the other end of the line asked him if he needed any company. He declined. We went to sleep early so as to get to the con in time for André's L5R card tournament the next day.

We woke up feeling worse than when we had gone to sleep – this whole “Best” thing wasn't panning out and I wondered what America's worst inn was like. We piled into a cab and André went to his card game while the rest of us wandered the exhibit hall. I got my picture taken with the Master Chief and ended up by the Art Show. I met several L5R artists there although April Lee and Steve Argyle were my favorites. Steve was especially friendly and I bought a small art card from him for André of a Crane character (the clan André plays) and a Phoenix art card for myself. Elsewhere in the exhibit hall I was offered a free comic book. After a brief conversation with one of the creators I agreed to review his book on this blog. As soon as I send the extras he gave me to Jim I'll write up that review separately.

I headed back to the card room to check in on André and give him his art card. The card room was pretty cool – there was a large area dedicated to the superhero vs game and there was a building set up as the Daily Planet as well as a few superhero statues (Wolverine, Sabertooth, the Thing). I went back to the exhibit hall where a Storm Trooper demanded that I turn my badge around (I did). I got and autographed picture of Lani Tupu (he even signed it as Captain Crais!) and then I hung out with Steve Argyle a bit more as he told me about how he had almost caused a riot the previous day thinking that the cast of Firefly was at Gencon. A bit later André dropped out of the card game in favor of the last chance qualifiers that both Corey and I were participating in. I actually did better than I had thought I would by going 2-4 (W-L) overall. Andre was 3-3 and Corey was 2-4 as well. I met a fellow Phoenix player, Brandon and we had a few conversations about the possible outcome of the tournament.

Eventually André and I ate dinner and made our way to the D&D room. We participated in a short but entertaining beginner D&D game. RPG games used to be a large part of our lives and it was enjoyable to get an opportunity to play with new people. We retired soon after to our grungy hotel room. 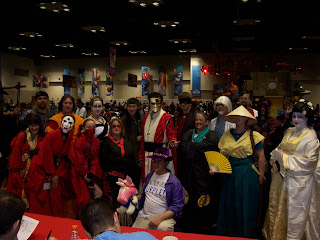 We made it to the con early in order to drop off Corey at his card game. André and I spent some more time in the dealer's room but the better part of the morning was spent tying the obi of my outfit. I was dressing up (see kimono pictures - in the group photo I'm all the way to the left) in order to show support for the Phoenix L5R players by entering the costume contest. Unfortunately, without our more experienced obi-tying friend, Bonnie, it took two hours to make the kimono look right. André was nice enough to wear the Crane shirt I had made for him (at 8am, in the hotel room, using a paper cup to paint the circle for the Crane mon) as well as a blue and white top robe so I wouldn't have to dress up alone. We went back to the card room to see how the tournament was going and then met up with Gary for lunch. Gary took us to the Alcatraz Brewery, which was alright, but trying a bit to hard to be fancy. After lunch we played a table top L5R game and had a fantastic time. The storytellers were very good at running game modules and we got fairly regular updates on the card tournament since many of the players were card players 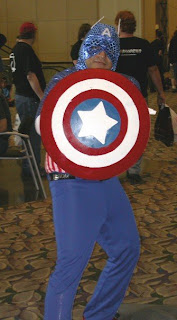 as well. Around 6pm we headed back to the card room where they were holding the costume contest. I actually made finals and earned a point for the Phoenix :) Then we participated in out clan meetings - the way L5R is run the players get a direct say in the background storyline, so clan meetings were a way to ask the players what they wanted out of the game.

This was also the official costume day for the con, and I, like Lee, saw Jim on my vacation!

There was a pub crawl for the L5R players that night but we only attended briefly before deciding that sleep was more important.

Corey and Gary headed back to the airport after shopping and having lunch with André and me. They both had a good time overall and we discussed the possibility of returning next year. We decided that it was a good idea - but only if we planned ahead and reserved a hotel room in the actual city (as a side note André and I have already reserved a much nicer room for Gencon Indy '08). André and I spent the rest of the day playing another game with the L5R RPGers and in the exhibit hall. We both acquired new artwork from Steve Argyle and April Lee as well as a few games we were given at extreme discount. We then decided to unwind by seeing a movie - The Invasion. It was actually a fun subtle horror movie although we were so worn out it was difficult to stay awake. We went back to the hotel fairly early to pack and make sure we got to the airport by 5am.

Gencon was excellent. I am looking forward to next year and will hopefully be better prepared to take advantage of the unique environment offered there. I definitely need to hit up the superhero museum and André and I also plan on going to the Murder Mystery Dinner Theater while we're in town. Also, next year my costume will be even more spectacular until the judges are stunned by my awesomeness and give me many points for my clan!