Hmm, I should consider picking a different day for my posts as Thursday night is always my major homework night. Thus I end up writing more about school and less about comic books.

Still, One of the major issues all of us on this blog have discussed at one point or another is how many comic books are out there that are considered 'all ages' anymore. In fact we go out of our way to mention when a book is child appropriate. I find that many times it's hard to judge about a book. I find myself recommending books like the Legion of Superheroes, Bone and Mouseguard to parents and many times find that I have to be even more particular with my selections. After all these books contain violence, betrayal and even death. Many parents seem reluctant to expose their children to these things. Yet I wonder if our society has become overly protective of their children in recent years - perhaps this is why teenagers seem to rebel in more extreme ways. As I look more closely at children's literature such as Alice in Wonderland I find myself wondering why we've 'dumbed down' the stories we expose children to. Personally I think many kids can handle and learn from (in a positive manner) a lot more than we give them credit for.

This is the essay I just finished writing about the satirical nature of Alice's Adventures in Wonderland. All of the examples are directly from the story, and I am convinced that the children's stories we read today cannot compare to the depth found in stories like this.

"Alice's Adventures in Wonderland", by Lewis Carrol, satirizes society through the eyes of a child attempting to come to terms with the world around her. Carrol uses the creatures of Wonderland to illustrate stereotypical adults in what he saw as a nonsensical culture.

The White Rabbit is the first Wonderland creature Alice encounters. The Rabbit is a parody of the typical working adult in society. Alice becomes intrigued by the Rabbit when he pulls out a pocket watch after exclaiming, "Oh dear! Oh dear! I shall be too late!" (Carrol 5). Throughout the story the Rabbit seems to be running late, although we're never quite sure what he's so late for (presumably he's running one errand or another). Carrol is mocking the average man's inability to recognize what is and isn't important. The Rabbit is so consumed with his worry about being late that he fails to notice what's going on around him. In fact he even mistakes Alice for his own housemaid, Mare Ann. He sees Alice and assumes that she must be his servant and orders her to "Run home this moment, and fetch me a pair of gloves and a fan! Quick now!" (Carrol 21). Not only does this show how the average working adult is obsessed with time but it also illustrates how many adult members of society take little notice of those they consider to be beneath them. 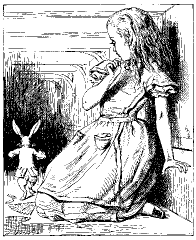 The Duchess is another highly stereotypical character. She represents the people of society who feel that they have the answer to everything. During Alice's first encounter with the Duchess she informs the child that "You don't know much... and that's a fact" (Carrol 37). From then on the Duchess not only informs Alice of 'facts' (that make little sense) but also orders her around. The Duchess seems to presume that she is better than Alice because she is comfortable in the belief that she knows more than Alice. Later, in the Queen's garden, the Duchess again asserts her own superiority. She begins to find morals in everything that Alice says - whether or not there is an intended moral. For example when Alice informs the Duchess that her flamingo may bite the Duchess says, "Very true... flamingos and mustard both bite. And the moral of that is - 'Bird of a feather flock together' (Carrol 57). Alice points out that mustard isn't a bird and rather than admit that her statement was in error the Duchess glosses over the whole incident by agreeing with Alice - as if it all makes sense anyway. This shows the Duchess to represent all the members of society who act in the belief that they know all there is to know.

The Queen is a representation of adult authority. She satirizes the world of rules and regulation by representing extremes of illogic and impossible rules and regulations. The Queen's croquet game is a perfect example of this. Alice finds herself given inefficient tools to play an impossible game in which she never quite sure of the rules (as they're always changing). "The players played all at once, without waiting for turns, quarreling all the while... and in a very short time the Queen was in a furious passion... shouting 'Off with his head!'" (Carrol 53). The croquet game itself is a mockery of human society while the Queen, at it's head, is a symbol for the authority that claims to maintain society. In it's extreme form, bureaucracy wishes to solve problems with haste - but with little regard to those that it effects of the actual execution of the actions to be taken. This to, is acted out by the Queen when confronted with a creature with only a head who she wishes to have beheaded. When no one seems to be able to behead the creature she decides that "if something wasn't done about it... she'd have everybody executed" (Carrol 55). The Queen clearly satirizes adult society's befuddling authority.

Wonderland is an elaborate representation of adult society and all it's strange stereotypes and patterns. Carrol uses the characters and circumstances of Wonderland to create a satire of society through the perspective of childhood. 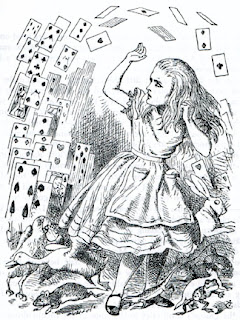 I would, of course, like the opinions of the actual parents who read this, as I don't have children of my own. I am curious on how people feel - do we shelter our children more - perhaps in an attempt to keep them younger longer? Or do you feel there has been little change in children's literature?

As an interesting side note though I wonder if comics are considered 'kid stuff' by society because children's literature is associated with illustrations alongside the text?
Posted by Gwen at Friday, September 28, 2007