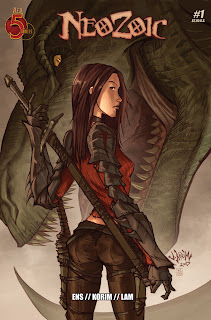 As many of you already know Comics And… has been interested in Red 5 Comics from early on. Jim, Lee and I all worked together to review their first releases (Neozoic, Atomic Robo and Abyss) and we’ve had a lot of fun seeing what this new company has been putting on the market. Paul Ens, both the writer of Neozoic and a co-creator of Red 5 Comics (along with Scott Chitwood), was nice enough to take the time for an interview. This was my first attempt at an interview and Paul made it easy on me =)

Gwen: I did a bit of research before contacting you with this interview, but honestly most of what I could find was that you were formerly the web director for Lucasfilm’s Starwars.com and Lucas Online. How did you end up becoming one of the creators of Red 5 Comics?

Paul: I've been an entrepreneur all my post-teen life, but I'd been a Star Wars fan even longer, so when the chance came to work at Lucasfilm through the Star Wars prequels, I couldn't pass it up. But once Episode III was done, I started getting the itch again to play in my own playground. Scott Chitwood was in attendance for the Revenge of the Sith DVD press junket, and we got talking about comics and rekindled a spark to start our own comic company. From there, it's just been hard work and much fun.

Gwen: How did you go about finding the talent for the various titles Red 5 Comics is putting out?

Paul: Some of the talent has come through connections during my Star Wars years, particularly on Abyss with the team from Star Wars: Tag & Bink, and on Midknight with Tom Hodges who illustrated my Star Wars: Evasive Action comic.

The rest we've connected with online, being online junkies. J. Korim of Neozoic I found doing a Google search for visual reference of women with swords. I found a great piece of fan-art from Kill Bill and couldn't get the image out of my head. I finally just had to contact him and it turns out he was available.

Gwen: What do you think your greatest challenges will be as an independent publisher?

Paul: Our challenges are many. The first of which was just to get some product on the shelf. Our next greatest challenge is to have people give our titles a try. It seems most people who give us a look seem to really enjoy what they see. But the reality is that we have a long way to go before most comic readers have even heard of us.

It is our intent that Red 5 Comics will become synonymous with fun reads, cinematic story telling, on-time issues, beautiful art and great value. We have a long way to go. :)

Gwen: When it comes to comic book creators, you can hear anything from tales of working on a story since childhood to having an epiphany a month before the first issue comes out. How long have you been working on the ideas behind Neozoic?

Paul: I've had a long-standing "rule" that I will go see any movie with swords and I will go see any movie with dinosaurs. (Yes, I end up seeing some very bad movies.) Very shortly after Red 5 Comics became a solid idea, I wondered why there were no stories with dinosaurs and swords, and the premise came very quickly. However, the mythology woven into the story took a little longer, and has been evolving for over a year now.

Gwen: Some writers produce skeleton scripts while others find the details of the art to be extremely important to how their story is perceived. How closely do you work with the team on Neozoic?

Paul: The character design was very, very important to me, so I'd been doing my own concept art well prior to hiring Korim. He's done an amazing job of getting what was in my head onto paper. In fact, he's amped it up quite a bit. We're wrapping the art on issue #3 right now, and by now the three of us (myself, Korim on art, and Jessie Lam on colors) have a great groove going.

Gwen: Do you have an overall storyline planned for Neozoic or will you just see where it takes you in the long run? 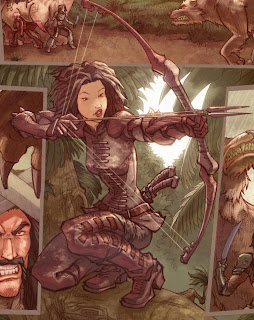 Paul: The first major story arc has been in my head since day one. The first 8-10 issues are pretty much a boulder in motion at this point. However, the stories after that have themes and basic conflicts planned out, but they're not as tightly defined at the moment.

Gwen: Neozoic has a fairly interesting background story, as far as the setting being an alternate time line where dinosaurs evolved right alongside human beings. How did you come up with this alternate-Earth?

Paul: It all happened really quickly, but I was looking for a reason to have swords and dinosaurs on the same page. What really attracted me to the concept was that I thought the premises out there for having humans interact with dinos were wearing pretty thin. The plausibility always seemed forced. But the idea that the extinction event could be negated with a tiny twist of fate is relatively easy to accept. Then you just flash forward -- how would the human race possibly deal with that environmental circumstance. The first few issues show the Monanti people and their solution, but as the series goes on we'll see other societies and their solutions as well.

Gwen: Why did you choose a female lead?

Paul: Lilli is an amalgam of several people I know, who happen to be female... so it wasn't so much a choice as that just happened to be who she is. Her story arc has some complex maternal elements as well as relationships to fathers and father figures. A male just wouldn't work.

Gwen: What are your long term hopes for Red 5 Comics?

Paul: We're definitely committed to Red 5 Comics as a long term proposition. We intend to be putting out comics in 2027... though who knows how that will look technologically. I'd love for the industry to have 10 really major players, instead of the 2 or 4 we have now... and for Red 5 to be one of them. I'm looking forward to some Red 5 characters, and Red 5 Comics itself, to be a household name.

Most of all, I hope that month-to-month we entertain people. Otherwise, I don't care about the rest of that stuff.

Gwen: Lastly, what is your favorite kind of dinosaur? 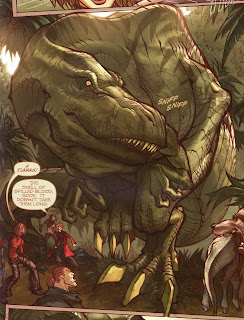 Paul: Well, you simply can't beat a T-Rex for sheer cool factor. However, my first three dino toys were a plastic ankylosaur, triceratops and stegosaurus... so those have an emotional appeal as well.

Paul adds… Red 5 Comics is just a month in, so many stores are only ordering our titles if customers ask about them. Neozoic #1 came out a few weeks ago, but stores can still order it through Diamond with code AUG073944, and also Neozoic #2 with code OCT073754. The second chapter is on shelves in December.

Check it out, and thanks for the support.

I encourage everyone to check out Red 5 Comics. I’ve enjoyed all that I’ve seen from them so far and have already been passing around the books I’ve gotten to my friends. Thanks again to Paul, both for this interview and for such an exciting new book. Personally I’m hoping Paul’s concept art will be included in a trade one day – now I’m curious!
Posted by Gwen at Friday, November 09, 2007