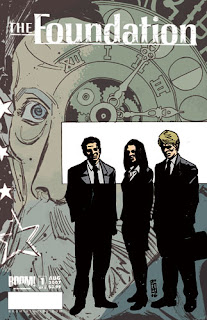 History shows that in the 1500s, Nostradamus' three volumes of prophesies were best-sellers, making him a rich man. But what the world doesn't know is he took his vast treasure trove of riches and invested them in creating a foundation to prevent his prophesies from occurring... This secret team still functions today, using Nostradamus' published and unpublished tomes to predict threats to worldwide security! In the vein of The X-Files, but with a 24-like spin!

Gwen: Chee's art is impressionistic and carries a subtle weight that is emphasized by the use of color and light. Chee's art was the first thing that drew my attention on reading The Foundation. The story itself starts off slow and contemplative and builds quietly towards a deeper plot. Still, as elegantly done as the story and art are, I was impressed more by the idea behind this story.

I've written before about my thoughts on comic books as literature, and after reading the first issue I feel that this book may have that type of potential. When you sit down and begin with debate what you yourself would do in the main character's shoes - and you realize that even after examining your own values and principles that you just don't know - well I think that opens the door to a truly thought provoking story.

I look forward to following the main character through his dilemmas, and seeing what the creator's have in store for us. If you're looking for depth in your reading and age-old conspiracy goodness, this is the comic for you!

Grade A
Jim: Foundation starts out so quietly that you can almost hear a pin drop, but has such gravitas that you can feel the main character’s soul dying as he does his job. BOOM has another winner with The Foundation. Instead of starting off a series with an overly long drawn out exposition, or a long narrative set-up, we are given the setting of a simple mission. The premise is that an agent of the Foundation stops a man from getting on a plane that the Foundation knows is going to crash. The Foundation also knows this man is destined for greatness and hence they go about saving him. They save him by holding him hostage at gunpoint and making him miss the flight. They never reveal anything to the person they saved as to minimize any impact on what he may do in the future. The thing that is killing the agent is saving only one person when he could have maybe saved them all.

The Foundation is only revealed to be an organization that has deciphered Nostradamus’ writings so they have a map of the future. Their goal is apparently to act as shepherds of that future and insure that it occurs. The nuts and bolts of the Foundation, who is behind it, and why it does what it does is a story for another time - or one that can be revealed over time. By focusing on this simple mission we get to know our main character and the mission of the Foundation without slowing down, thus drawing the reader into the story.

This book was a strong opening chapter in a premise that has the potential to be a series of mini-series.