This was a decent week, but nothing was an absolutely great best book, although a book I never got did make my the absolute bottom of my list. On weeks like this my opinion of what is the best book almost varies from time to time as I review the list. That makes the first week of June books what I have noticed historically and that is for whatever reason the first week of the month is usually the weakest of the month. What I did do this week is drop two maxi-series. Maxi-series (12 parts) are much easier for me to drop after a couple of issues. I’m unwilling to take a chance on them turning around down the road and dropping them saves $30 by not buying the next ten issues. 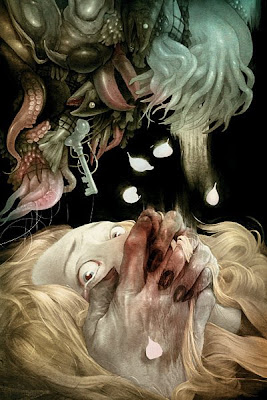 House of Mystery #2 – Main Story - Writer Matthew Sturges, Art Luca Rossi, Colors Lee Loughridge, Interior Story – Bill Willingham, Art Jill Thompson. This series is looking like it will be the next great Vertigo series. This issue we find out that Fig (the girl from last issue) is stuck in the House of Mystery. She says she is the architect who designed yet the house is very, very old. As the other trapped members of the house (that act as the staff) take her to her room and leave her off to bed she hears a voice saying “Hello Fig”. She replies “Hello, I was wondering when I would hear from you.” I’m totally pulled into this series, wanting answers for a ton of questions and wanting some of the mysteries to be revealed. The art by Luca Rossi is very well done and full of an amazing amount of detail. As guests at the House like to tell stories we also get a short story that gives us an unrelated tale. This issue we get the one about the world’s greatest process server who gets himself altered to deliver an undersea summons. This was a delightful and fanciful little fish story that was beautiful illustrated by Jill Thompson. The series is already a winner and joins the ranks as another terrific Vertigo series along with Fables, Scalped, Hellblazer and Northlanders. If Air and Madam Xandu are strong series also then Vertigo looks to be maintaining itself very well.
Jonah Hex #32 – Writers Justin Gray and Jimmy Palmiotti, Art Jordi Bernet, Colors Rob 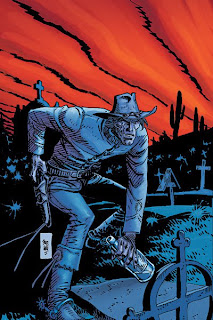 Schwager. I love this series and this issue was another excellent one. Jonah is in Mexico and a man wants to hire Hex to kill the Matador who stole his wife’s affections from him. Jonah refuses and the man captures Hex and leaves Jonah to be gored by a bull. The Matador saves Jonah and helps nurse him back to health. Jonah returns and kills the man who tried to hire him. It is a very straight forward story, but I love the characterization of Jonah. He will not be hired as an assassin, her turns down the Matador’s young sister who is trying to sleep with him, he refuses money from the Matador to kill the other man and after killing the bad guy, refuses the money from his abused wife. Jonah has a moral code and always sticks with it, he is a hard person, but he does have a code that he lives by. Jordi is a great artist and he brings Hex to life as the hard bitten anti-hero. Every issue with Bernet as artist we are guaranteed a great art job. Hex is the best western on the stands.

Noble Causes #34 – Writer Jay Faerber, Art Yildray, Colors Ryan Vera. This series is doing a terrific job of not only being accessible to a new reader jumping on when they said to jump on, but coming out monthly and delivering an interesting and compelling story, while still giving us plenty of action. It starts off with part of the Noble family fighting a giant Pharaoh in Egypt, jumps to the follow up to the almost death of Frost and some major family squabbling and ends on one hell of a note that Doc Noble’s wife only married him because his ex hired her to marry him. Of course having been divorced myself, I can see the whole hire someone to marry your ex idea not being as sinister as it seems on the surface. This book works as an action / adventure and as just a rock solid good soap opera. Call it what you will, but what Stan Lee gave to the super hero world was personality conflicts, love stories and convoluted relationship triangles or soap opera elements. They are the parts that make you get invested in the characters and Jay Faeber is a natural heir to that style of story telling. Noble Causes is part of the Faeberverse that includes Dynamo 5 and Gemini and each book is a very good read. Jay has captured the essence of the silver age of Marvel and has kept it fresh and modern.

Nightwing #145 - Writer Peter Tomasi, Pencils Rags Morales, Inks Michael Bair, Colors Nathan Eyring. Damn if this title is not working its way up into being one of DC’s top series. Peter Tomasi has crafted a supporting cast, created an excellent menace for Dick to fight, shown how interwoven the DC universe is and how close the Bat family can be and had great fights and acrobatics showing off why Nightwing is his own man. And he has done this in the space of six issues. Who needs re-launches and other stuff, just put a good team on a book with an idea of what they want to do and it can be terrific. Rags did a beautiful job this issue especially when Dick was fighting the winged bad guys. Dick was flipping from buildings, to his hang glider and flipping around like a true trapeze artist. We also had Dick sneak onto Talia’s ship and give her a taste of her own medicine after she threatened Dick’s girl friend. This was a fantastic issue and I’m looking forward to the conclusion of Tomasi’s first arc.

Detective Comics #845 – Writer Paul Dini, Pencils Dustin Nguyen, Inks Derek Dridols, Colors John Kaliz. Paul Dini does some great one and done issues. This issue he manages to give a nod to a lot of current continuity and still tell a great story about a new serial killer. Batman and Riddler are both investigating this crime and they both log onto a chat room full of amateur detectives. Among them is Detective Chimp. I love that Batman and DC go to a private chat room and joke about Edward Nigma being logged in and not knowing who they are, but they know who he is. We ultimately find out that the killer was setting Nigma up as he felt the Riddler was responsible for his wife’s death. In the midst of all of this we see Catwoman is back and we get an acknowledgement about her being trapped on the prison planet. The flashback scenes were done in very basic color and had the feeling of being almost painted with watercolors. Dustin is getting better and better over time and this book was an around great issue.

That is a wrap for this week and I just saved $60 in cover prices of books. Of course if either one gets really good, then I could buy the trade down the road.