As long time readers know, Jim and I occasionally do the back-n-forth thing on topics. We try to always talk about both sides of an issue to give a semblance of a fair and balanced opinions. In this case, Jim winged it all on his own, and as usual got it all wrong.

So, below is what would have been posted if Jim had any patience.... 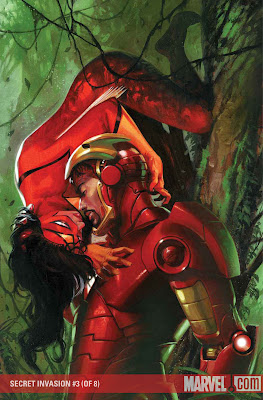 Jim: Before I even begin to dissect what has officially became a train wreck of a series, let me first off ask Marvel to please send me a kiss as they continue to **** me. I mean come on people $4 for the same 22 page comic book and this is your biggest selling book. Nice way to reward your fans.
Lee: It's not that bad of a series, you were just tired and whiney when you wrote this. I can't believe you are complaining about the price! Most of the Indies we talk about every month are over $3, closer to $4. It's just the way comics are going. But a discussion about how comics are pricing themselves into irrelevancy is a topic for another day. In this case, to be fair, it has the heavy card stock cover. That's worth at least another 50 cents.

Jim: Another thing I discovered is that Marvel is ramming certain characters down our throats whether we want them or not. Young Avengers is being pushed as are the Initiative brats. Seriously I rather see new people under the masks then these groups.
Lee: Yak yak yak. All companies ram characters down your throat during these weenie events. Are you trying to say that DC didn't ram a "Death of the New Gods" event down all the DC Dweeb's throats. While I have no love for these characters it makes sense. The Avengers are in the Savage Land so someone has to go protect Manhattan. Here's the thing, like the characters or not, it makes sense within the context of the story. Let me clarify, it makes comic book sense. This is no different than having the Defenders or Champions or the other B-list superheroes that showed up in the old days. I was just happy it wasn't the X-men.

Jim: That will have to serve as my segue of sorts... Lenil Yu’s art is solid art and he does a nice job, but his style does not fit this type of book.
Lee: That was a segue? Good grief. I wonder what you would have typed if you has launched right into a "I hate this book" discussion. Yu's art is either love it or hate it. There doesn't seem to be much middle ground with people's reactions to his art. I think it's fine. I'd rather have a great artist stretching than an unknown hacking out pages.

Jim: The story itself is barely a story as opposed to being a series of huge panels and a few moments, somehow tying together I guess in the future to make a story.
Lee: And this is why you shouldn't write reviews when you're angry because you make statements that aren't true. There is one double page splash, one 3/4 splash page, and the rest are 4-6 panel pages. I liked the fact the battle pages seemed bigger and had less panels. IT'S A GIANT FIGHT SCENE! I'm looking for big pictures or people hitting each other. It worked well. And, the quiet moments had more panels in it for effect. Yu's layouts really aren't that bad.

Jim: 1) What happen to it being a secret? If everyone and their kid brothers does not know about it now then they need to look out their windows. I mean seriously wouldn’t it have been more exciting to see the that the world was being taken over by skrulls in a more subtle manner. Like how our leaders have been taken over by corporate interest and sold this country down the river. Political commentary aside, this is a secret as hitting someone in the face with a two by four.
Lee: I can't believe you are gripping about the word "Secret". The secret is out. Secrets always get out. It's called a leak. The "secret" part of the invasion has been taking place over the past two years. That's what Bendis was doing, building one grand scheme. You're just angry you missed it. AND, most likely, DC already did "Invasion (recently reprinted in handy-dandy trade paperback) so Marvel had to call it something new.

Jim: 2) How can the FF, where the Skrulls were introduced, be relegated to sideline duty in a separate mini-series? I mean this is the group that started the whole skrull thing and they should be front and center.
Lee: It isn't about the FF. That's why they aren't front and center. This is an Avengers crossover. Not FF crossover. This is about a giant alien invasion, it isn't about who discovered the aliens first. That's old school continuity getting in the way of your enjoyment.

Jim: 3) Why does Captain Marvel act like a bad guy when he was suppose to have decided that regardless of his origins he will be the new Captain Marvel? I could be wrong on this one, but I thought his mini-series established he was okay with being Captain Marvel even though he knows he is a skrull.
Lee: Actually, I got nothing here. I agree with you, this was a waste of two pages.

Jim: 4) If the skrulls now have the ability to make everyone this powerful why is it only a select few, just turn their entire army into super powered beings? What was the point of all the subterfuge in the beginning if they are just going to invade and smash everything? I mean at this point is their going to be anything left of the world? If they can duplicate all of these powers what is really going to stop them outside of the "War of the Worlds" solution with a virus that targets just skrulls.
Lee: It's a show of power. Maybe there was a failure rate with the power giving thing. Who knows. The whole point of the infiltration was to break the superhero community up and soften then up for the real invasion. This is no different than carpet bombing before sending the Marines in. You break the will of the people, then a big show of power will ease the way of the conquering hoard... or twelve in this case.

NOW as a side note, if Jim had said, creating an army of SuperSkrulls is stupid I might have agreed. One of the new S-Skrulls had Doc Ock arms. Another had Thors hammer. Another has Wolverine's claws. WHAT? That's just dumb. The natural shape shift into anything is far more powerful than this silliness. It smacks of fanboy slow-Sunday-afternoon-discussion-at-the-comic-store more than anything else.

Jim: 5) Are we really supposed to believe that Echo is dead now after all the build up around her? Didn’t the Avengers just track her to Japan, save her after she was dead and then find out about Electra being a skrull? We even had a special solo issue leading up to Secret Invasion featuring her and we are now going to buy she is dead? Even worse if she is not dead are we are supposed to believe the skrull queen would leave her alive?
Lee: WHAT? Don't even start a death in comic books discussion. If she's dead, great. If not, so what. If Jean Grey can't stay dead does it really matter? Green Arrow, back from dead. Green Lantern, back from dead. Wolverine, brain dead and then back from dead in same issue. Death has no relevance in comics these days. It was a scene to show that the Queen was a killer.

Jim: 6) The skrull queen is going to try and convince Tony that he is really a skrull, but just does not remember? .... blah blah blah.
Lee: I actually think this is one of the best parts of the book. In this one scene, Bendis manages to make the last two years of back issues relevant again. Do you remember complaining how Stark was so out of character? The message boards went nuts with " can't write" and "This would never happen". Turns out everyone was right because maybe Stark is a Skrull. It's a great twist and makes things that much juicier.

Jim: 7) Please stop with the blurry effects screwing up the art, little lines on each side of a person is fine. Half the time I ready to ask for a refund of my misprinted book.
Lee: Oh fer crying out loud. I can't believe I agree with this too. Yes, you're right, the blurry effects are stupid. Just because you haven't used the fancy button in photoshop recently doesn't mean you need to do it now.

Jim: 8) What the heck is with the gun Nick Fury is carrying? Is the goal just to make it the biggest and most ridiculous thing possible? If yes, then you have succeeded.
Lee: It worked. Fury is a bad-a$$ and that's a bad-a$$ gun. Don't you remember the guns sienkewiknsics... that dude who drew Moon Knight... him... don't you remember his guns. So it was distorted. Big deal. If you're going to complain about this why didn't you complain about the gun Rocket Raccoon was carrying in Guardians of the Galaxy. That was worse than this.

Jim: 9) And oh joy, oh joy another group of people who I have barely had time to get to know shows up so I don’t care about them or the people they are saving. I have read comics for over 40 years and followed both companies. Yes, I’m a bigger DC fan now days, but the biggest event in Marvel this year does not involve the FF, the X-Men, Thor, Hulk, Captain America and instead stars Young Avengers, the Initiative Brats, new Howling Commandos, Spider-Woman and Echo?
Lee: Uuuummm, I don't know where you're going with this so I'll resort to random silliness. 40 YEARS? That makes you what... 100? It's no wonder you like monkeys, it's because you're old. Huuummmm, that makes no sense either but it fits the nonsensical retort.

Jim: 10) Killing the Vision is a joke, that robot has been destroyed more times then Tokyo in a Godzilla movie.
Lee: So what, they killed the Vision. Again! It was a cool scene and a good way to show an exploding head without it being a real person. Cool pictures for the sake of cool pictures. AND, it goes back to death in comics, it just doesn't matter.

Based upon my carefully considered retorts, the new review opinion is....
Overall grade - B-

Honestly, I don't think that Secret Invasion is any better or any worse than all of the other mega-crossovers. It's fine. I do believe that it's breaking down more along the Marvel Zombie-DC Dweeb lines than most of the other crossovers have. If you like Marvel, most likely you'll like this. If this is what Bendis had planned all along then I give him credit because no one put it all together.