Lee: This is shaping up to be a budget busting month because DH has a ton of good stuff this month.
Thomm: Wait, you have a budget? Doesn’t the money flow like water at your house? 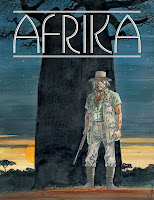 AFRIKA HC
Hermann (W/A)
FC, 64 pages, 8" x 11", $15.99
The masterpiece by Belgian comics creator Hermann is available in English for the first time! A misanthropic European expatriate, Dario Ferrer, acts as guardian of a Tanzanian wildlife preserve. Accompanied by Charlotte, a naive European journalist, Ferrer discovers a village under fire from mysterious agents of the foreign-backed government. Ferrer and Charlotte must fight not only to protect the preserve, but to expose government corruption—and survive to see another day. From award-winning creator and international bestseller Hermann! Gorgeous watercolor art and a fast-paced, violent story!
Lee: Hermann is one of the grandmasters of Euro comics so I am sold. He’s been writing/drawing forever and I am confident this will be good. Before you scoff, you might remember the Showtime television series, Jeremiah, adapted from Hermann’s comic of the same name.
Thomm: I never saw the show but read quite a few of the Jeremiah comics. Really good work. I’m curious as to what era this story is set, and the page count is a bit low for $16, but quite tempting.

THE COMPLETE TERMINAL CITY TP
Dean Motter (W), Michael Lark (A), and Mark Chiarello (Cover)
FC, 368 pages, 6” x 9” , $24.99
Visionary designer and comics creator Dean Motter (Mister X, Electropolis, Batman: Nine Lives) returns with the purest expression to date of his patented retro futurism! Terminal City is a place where transistor-tube robots rub elbows with old-time gangsters, where bright, shiny technologies cast deep noir shadows. Teaming Motter with celebrated artist Michael Lark (Daredevil, Gotham Central), this massive collection reprints the original series, along with its sequel, Terminal City: Aerial Graffiti! All fourteen issues of the classic, Eisner-and Harvey Award–nominated series series, collected for the first time!
Lee: This is a great noir story by Motter with great art by Lark. Complex and filled with overlapping storylines this is not to be missed.
Thomm: I’ve read a few bits of Terminal City. It’s a good story. For the price conscious like me, it’s a lot of story for the dollar, too.

CRIME DOES NOT PAY ARCHIVES VOLUME 1 HC
Various (W/A)
FC, 272 pages, 6 5/8" x 10 3/16", $49.99
Uncut and uncensored, the infamous precode Crime Does Not Pay comics are finally collected into a series of archival hardcovers! With brutal, realistic tales focusing on vile criminals, Crime Does Not Pay was one of the most popular comics of the 1940s. The series was a favorite target of Dr. Fredric Wertham and other censors and is partially responsible for the creation of the stifling Comics Code Authority. Now revered and mythic, this collection of the first four hard-to-find Crime Does Not Pay comics features a fine roster of Golden Age creators and a new introduction by Matt Fraction (Iron Man, Casanova)!
Lee: Golden Age horror stories, which this collection is, hold up … HOLY CRAP, I think the dude on the cover is holding that chicks head over an open flame?! In fact I think her hair is on fire!!! Wow, they just don’t make cover like that anymore these days.
Thomm: Haven’t seen that since a guy’s face was shoved into an electric stove burner on The Shield. This isn’t just for the historically minded, but it sure doesn’t hurt to be interested in the history of comics. Good stories of historical significance.

DOCTOR SPEKTOR ARCHIVES VOLUME 4 HC
Donald Glut (W) and Jesse Santos (A)
FC, 176 pages, 7" x 10", $49.99
Confronting supernatural threats and vengeful monsters, Dr. Spektor travels from Scottish lochs to cursed swamplands—and from the surreal dreamscape of the Egyptian afterlife to New York City’s Chinatown! Collecting issues #19 to #25 of The Occult Files of Doctor Spektor and a Spektor tale from Gold Key Spotlight #8, plus notes from Spektor’s secret files, including a piece on Dr. Solar!
Lee: So, the last book had a chick with burning hair and this one has… woman in bikini swimming in what appears to be blood red water with a one eyed tentacled thing. And, the whole while Igor is in the background laughing fiendishly and… wait what’s that? The hunchback in the background is actually our hero, Dr Spector. Wow. Really? Ok, maybe that explains why she’s swimming with the monster.
Thomm: I think swimming is a bit generous for what she’s doing. More like flailing. And the good Doctor is just trying to help. Don’t belittle his scoliosis.

LOBSTER JOHNSON: THE BURNING HAND #1 (of 5)
Mike Mignola (W/Variant cover), John Arcudi (W), Tonci Zonjic (A), Dave Stewart (C), and Dave Johnson (Cover)
FC, 32 pages, $3.50
When a tribe of phantom Indians start scalping policemen, Hellboy’s crime-fighting hero Lobster Johnson and his allies arrive to take on these foes and their gangster cronies! From the pages of Hellboy comes the first Lobster Johnson story in four years!
Lee: I always enjoyed the Lobster Johnson stories when they appeared so I am signing up for this. It should be good fun.
Thomm: Why are ghost Indians allied with gangsters? Both covers are pretty cool, by the way. 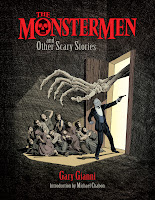 THE MONSTERMEN AND OTHER SCARY STORIES HC
Gary Gianni (W/A)
b/w, 168 pages, 8 3/8" x 11", $24.99
In a world plagued by zombie cowboys, squid pirates, abominable snowmen, mustachioed skulls, movie phantoms, and fat, flying demons, only millionaire film director Lawrence St. George and his associate, Benedict of the venerable guild of Corpus Monstrum, have the capabilities and the wit to bring these horrors down.
Lee: Hum, we’re heavy on monsters this month. Oh well, this is slim but slightly oversized to show the SPECTACULAR Gianni art. Gianni is currently the artist for the Prince Valiant strip… which means he’s an incredible artist. This is so worth it for that alone.
Thomm: I haven’t seen Prince Valiant in a while, so I can’t speak to the art. Why’s the skeletal hand so large?

Lee: I’m going for the “Crime Does Not Pay” book. Nothing beats pre-code horror/crime for entertainment.
Thomm: I like the Terminal City book best of the lot. Crime Does Not Pay’s a pretty good choice, too.
Posted by Lee at Tuesday, November 01, 2011