Lee: DH is a strange little company. I really like them and all their offerings but it always seems… I don’t know… static. Not this month! Wow oh wow do they have a ton of great books coming out. And, to keep the post short, I actually had to skip a couple.
Thomm: DH has a nice variety of things, so a short post is not easy. 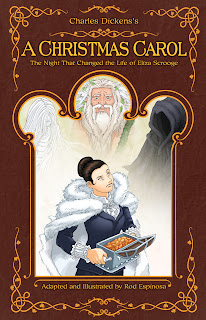 A CHRISTMAS CAROL: THE NIGHT THAT CHANGED THE LIFE OF ELIZA SCROOGE HC
Rod Espinosa (W/A/Cover)
FC, 100 pages, $19.99, 6 5/8” x 10 3/16”
Charles Dickens’s holiday classic, A Christmas Carol, is given a fresh twist—with a female Scrooge! Rod Espinosa (The Courageous Princess) adapts and illustrates this story of the miserly Eliza Scrooge, who is visited by the ghosts of the past, present, and future on one fateful Christmas eve. This hardcover volume makes a perfect gift for the coming season!
Lee: Now this is interesting. DH is smart enough to solicit this wwwaaayyyy in advance of Christmas. It’s semi-annoying but it has built in lag just in case there’s problems at the printers. As for the story… I like it. It sounds like a fun twist on a traditional tale.
Thomm: I’d wager the female Scrooge has been done somewhere already. As many TV shows have done a riff on it, it’s almost a certainty. Doesn’t mean this isn’t good, but it’s not all that original. I’ll stand by my favorite, the WKRP version.

Six more below the break...

BEASTS OF BURDEN: NEIGHBORHOOD WATCH
Evan Dorkin (W) and Jill Thompson (A/Cover)
FC, 32 pages, $3.50
Adventure, mystery, horror, and humor thrive on every page of the Eisner Award–winning Beasts of Burden. The four-legged occult-investigating team—a heroic gang of dogs and one cat—are doing their best to protect their home, Burden Hill, from a chicken-stealing goblin, a frightful basilisk, and a strange lost herd of sheep! This special one-shot reprints three stories from Dark Horse Presents!
Lee: The 3 stories collected here were some of the best from DHP. If you have read Beasts then you should get this. Actually, I’ve read the stories and I’m still gonna get this.
Thomm: I like what DH is doing with collecting stories from DHP so that you can now get just those stories and not the whole tome that is DHP. I like the tome, but it’s not for everyone. 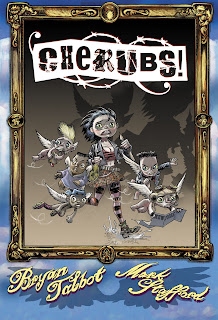 CHERUBS! HC
Bryan Talbot (W) and Mark Stafford (A/Cover)
b/w, 192 pages, $19.99, 6" x 9"
Falsely accused of heaven’s first homicide, five churlish cherubim escape to New York in pursuit of the renegade archangel Abbadon on the eve of the Apocalypse! Befriended by exotic-dancer Mary and chased by unstoppable Seraphim terminators, the Cherubs alone stand against hell’s hordes as Satan prepares to make war, not love!  Mark Stafford is one of the UK’s hottest indie artists!
Lee: I’ve been reading Talbot for years and he is a master storyteller. His Grandville stories have been highly entertaining so I am sure this will be equally grand. I do wonder why it hasn’t been published before now.
Thomm: I’ve read one of the Grandville books, and it was quite good. I’m a little confused about some elements of the premise in this book, though. Weren’t there homicides when Lucifer rebelled? 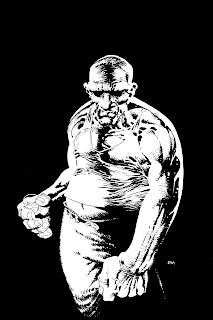 THE CREEP #0
John Arcudi (W), Jonathan Case (A), and Frank Miller (Cover)
FC, 32 pages, $2.99, Miniseries
A young boy puts a gun in his mouth and pulls the trigger. The police don’t care. Not about his death or the death of his best friend two months earlier. The dead boy’s mom seeks help from an old flame that’s employed as a detective. What she doesn’t know is that he suffers from acromegaly—a physical deformity resulting in brutish facial features at mid-life. Will his freakish appearance get in the way of solving the case?
Lee: It’s amazing how much a good cover can impact a buyer’s decision. I am not convinced on the story but I was immediately drawn to Miller’s cover. I’ll check it out on the stands to see if the inside is as good as the outside.
Thomm: Some of this has appeared in DHP. It’s going to be very good, from what I’ve seen there. Sort of a noir but quite. 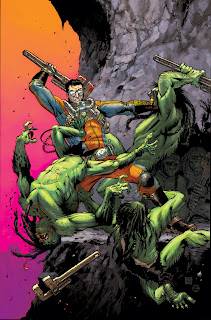 FEAR AGENT VOLUME 1 HC
Rick Remender (W), Tony Moore (P), Jerome Opeña (P), Francesco Francavilla (P), Kieron Dwyer (P), Sean Parsons (I), Mike Manley (I), Hilary Barta (I), Ande Parks (I), Lee Loughridge (C), John Rauch (C), and Michelle Madsen (C)
FC, 480 pages, $49.99, 8" x 12 3/16"
When down-and-out alien exterminator Heath Huston stumbles upon an extraterrestrial plot to commit genocide against the human species, he must put down the bottle and resume his role as a peacekeeper . . . as The Last Fear Agent. This deluxe hardcover omnibus, the first of two, collects issues #1-#15 of the acclaimed Fear Agent comics, along with half of the Tales of the Fear Agent side stories, covers, pinups, and artists’ sketch galleries!
Lee: This is cool because it collects a whole bunch of Fear Agent in one chunk. And it’s oversized to boot! Now only if I liked the series better. It starts off great but seems to become a convoluted mess with an unlikeable protagonist as it goes on. But, then again, that sums up most time travel stories.
Thomm: I haven’t read any of this and this kind of big collection is not place to start, so far as I’m concerned. Lee’s not convincing me, either. 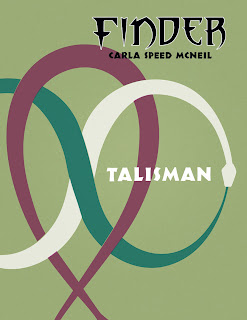 FINDER: TALISMAN HC or LTD HC
Carla Speed McNeil (W/A/Cover)
b/w, 96 pages, $19.99, HC, 8 1/2" x 11"
b/w, 96 pages, $75.00, Ltd. HC, 8 1/2" x 11"
Since 1996, Finder has set the bar for science-fiction storytelling, with a lush, intricate world and compelling characters. Finder: Talisman is the story of a book — the book beloved by misfits and castaways, once glimpsed and forever longed for — and of Marcie, the kid who never gives up her search for magic and meaning. Now, the fan-favorite story is collected in a new, oversized hardcover edition and a limited-edition hardcover signed by creator Carla Speed McNeil!
Lee: $55 extra dollars just for the authors signature???? I shall pass on that. But, the cheaper version speaks to me. I really like the Finder stories in DHP and it made me curious about the original series. Perfect timing on DH’s part.
Thomm: I read a Finder story I checked out from the Library. I felt like I was coming into the middle of some larger world and that I was missing something but the story was self-contained. It was more a contextual missing something than a plot missing something. For anyone who tried to jump on board the X-Men, this is nowhere near as difficult as that. 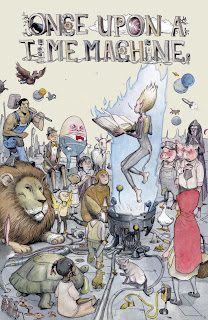 ONCE UPON A TIME MACHINE TP
Lee Nordling (W), Jasen Rodriguez (W), Tara Alexander (W), Khoi Pham (A), Charles Fetherolf (A), Nelson Evergreen (A), and Farel Dalrymple (Cover)
FC, 432 pages, $24.99, TP, 6 5/8” x 10 3/16”
Fairy tales have fueled our dreams and fired our imaginations for centuries. Step inside a time machine built by a collection of today’s finest storytellers, and enter a range of futures where familiar tales are reimagined in an astonishing variety of styles. Watch the next wave of leading writers and illustrators work alongside superstar creators like Farel Dalrymple (Pop Gun War), Ryan Ottley (Invincible), Khoi Pham (Daredevil), and Brandon Graham (King City) to deliver a reading experience that will delight generations young and old.
Lee: I love books like this! A classic story reinterpreted for a modern audience as done by some of the best indie artists out there. What’s not to love? I am sure there will be some clunker stories but I bet the good far outweighs the bad with this one.
Thomm: Like DHP, this is a good way to get a variety of stories, and a lot of them in this case. A very good concept, and with DH, likely good execution.

Lee: What a great month from DH! There are some really cool collections here and I can’t wait to read the Time Machine one.
Thomm: The Creep and Once Upon a Time are the ones I’ll be looking to read sooner than later.
Posted by Lee at Wednesday, June 06, 2012