What I've been reading the last few weeks 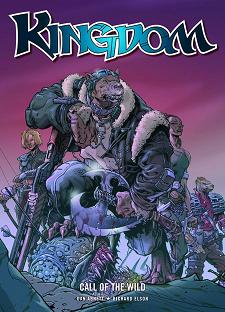 So, it's been awhile since I've actually read anything.  Why you ask?  Because I received the Game of Thrones box set for my birthday.  Even I understand that's a poor excuse for not reading since it is reading.  The problem is that I am a slow reader.  Like really slow!  It's taken me weeks to read all 807 pages plus appendices.  It's ridiculous.  As Wife says to me, "aw, it's like a child using training wheels!  It's so cute when you read a book without pictures"

Anyway, I am happy to report that the TV series follows the book exactly.  There are no major deviations and much of the dialogue is lifted directly from the book.  If anything, the book helped me understand the show even better.  If you have the time, or are a fast reader, then I highly recommend it.

In the meantime, I did manage to read a couple of trades in between chapters...
There was Kingdom: Call of the Wild, written by Dan Abnett, illustrated by Richard Elson, published by Rebellion, (long review here).  A straight forward Kamandi type story in which our hero is more Tuftan the Tiger instead of Kamandi.  It's fun, fluffy, pointless fun. 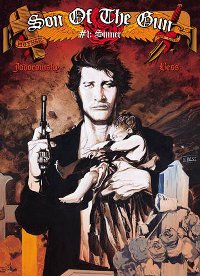 Son of the Guns Vols 1 - 2, written by Alexandro Jodorowsky, illustrated by Georges Bess, published by Humanoids (long review here).  Jodorowsky is one of my writer heroes because he is just insane.  Seriously, he has more whacked out ideas than even Morrison.  In the first 4 pages the story is established when a dwarf, transvestite hooker finds a baby abandoned in a trash can. He’s about to feed the baby to dogs when he notices the child has a tail. Yes, a tail. Realizing the child is as much of a freak as he is, he takes the child to raise as his own.

This is seriously twisted stuff that isn't for the meek.  If you like your crime comics dirty, and nasty, and leaving you feeling.... well dirty and nasty then this is the book for you.  It's great but you've been warned.

More below the break... 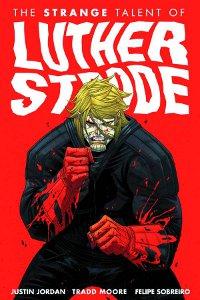 The Strange Talent of Luther Strode collecting the first six issues of the new series written by Justin Jordan, illustrated by Tradd Moore, published by Image(long review here).  Everyone complains that DC is taking too long to get to the story.  That's it's all set up.  This is a six issue mini-series that is nothing more than an extended origin story.  Don't get me wrong it's perfectly executed and very well entertaining... but it's still nothing more than an origin story.

and Severed collecting the seven issue miniseries written by Scott Snyder and Scott Tuft, illustrated by Attila Futaki, published by Image. (long review here).  This is one of those series that I loved it when I read it but the longer it sits with me then less I like it.  Well written.  Very good art.  But there's something missing.  I don't know why but I felt this was a pitch for a B movie like Candyman or Pumpkinhead.  Nothing wrong with those movies, and nothing wrong with this comic but I had higher expectations.

Finally, thanks to Jim I even managed to read a couple of floppies this week.


G.I. Combat #1 from DC.  There's nothing wrong with the book but there's no hook either.  Even though it's executed well, the soldier fighting dinosaurs angle was old years ago.  The new Unknown Soldier isn't nearly as exciting as the last version of him.  It's fine but it's not necessary reading.


Higher Earth from Boom!.  Boom priced the first issue at $1 to hook readers and that's about right.  If I had paid $4 I would have been mad but it's perfect for 1.  There's lots of setup with no clear direction moving forward but the sci-fi concept of traveling between alternate earths (think Sliders) is always interesting.  If the second issue were a $1 I would stay around.  At $4, it's iffy.


The Shadow #1 - 2 by Garth Ennis and Aaron Campbell, published by Dynamite.  This feels like Ennis was mailing it in for this series.  Again, nothing wrong but nothing right either.  In fact, the second issue managed to actually be dull while advancing the plot.

FINALLY, the surprise hit... The Spider #1 by David Liss, art by Colton Worley, published by Dynamite.  It's the Punisher crossed with the Shadow.  Seriously, that's it.  Our hero is borderline psychotic who kills the bad guys, has all sorts of mental problems left over from his time away at war, and drinks to dull the pain. It's more than Punisher Marvel U, but less than Punisher Max.  The saving grace is Liss's dialogue which is crisp and fun.  His plotting is solid and even though I've read this story a 100 times I really enjoyed it.

Also, Worley is a fine draftsman with an excellent sense of composition.  Sometimes he mimics J.H. Williams a little too much but it's visually pleasing.  Now if only he had a little better understanding of anatomy and drew a little more instead of phototracing it would be perfect.

And FINALLY FINALLY the stinker of the month goes to Hulk 7.1 by Jason Aaron.  Pure junk.  The Hulk (Banner) and She-Hulk (Betty) have sex in the street while the Orb (the giant eyeball Ghost Rider villain) watches.  That is the best Aaron can do?????  This was awful and I can't believe this is the same Jason Aaron that gives us great things like Scalped and Punisher Max.