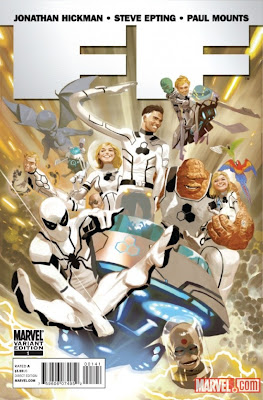 Jim started us off on a negative note on Monday, so I might as well finish the week the same way. Rather than keep you in suspense, let's see the grade at the top of the page (just like in school), but we'll still save the summary statement until the end:

I don't know about you, but in my house a "C" is almost equivalent to an "F" (in my county they use an"E" instead - gotta protect the child's self-esteem you know). However, despite the two F's on the cover, this book certainly isn't a total failure. It is a bit mediocre though and I'm more wary of the new direction now that I've seen a glimpse of it. Oh, I'm not dumping the title this soon, I'm willing to give it a few issues at least, but I have plenty of misgivings...

Let's talk about some of the pluses first. The variant cover by Daniel Acuna is really great and inviting. The positive vibe coming from this image really sets you up for something new and exciting. The art by Steve Epting is also excellent (isn't it always). I especially liked the red and blue Spidey scenes when he's swinging toward the Baxter Building and I love his version of the Thing's head, which reminds me of Byrne's. 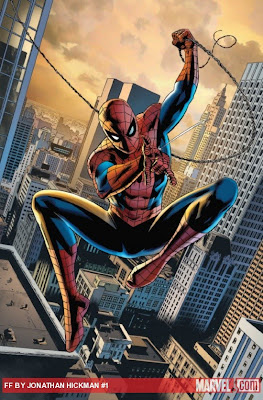 I actually like the new costumes for Reed and Sue, but Spider-Man's suit IS atrocious. Hopefully, the fact that he can change it mentally will mean that he soon will. I don't mind the Thing's outfit so much, but I think his boots are too small. The Thing's feet are usually huge and I can't imagine them fitting into those confining shoes. I know it's a nitpicking thing (no pun intended), but it just looked wrong to me.

The interiors of the Baxter Building look nifty with the broad staircases and windows, but functionally it doesn't make much sense. This is the most technologically advanced team on the planet and they don't even use an escalator or an elevator most of the time. Forget about saving the world, they'll be spending all their time climbing the stairs. I suppose it's designed to give that friendly non-profit "foundation" feel to it.

There isn't much action in the book. Only their brief battle with A.I.M when the Wizard is freed. Not sure why the Wizard was naked either. It's a lot of setup and we do at least get two new recruits in the issue, Spidey and...more on that later. 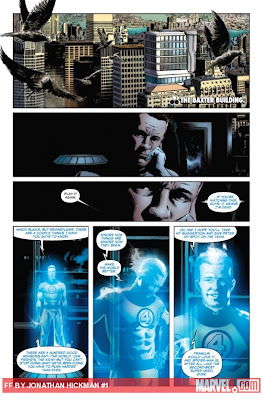 One of the biggest problems I had with the story right of the bat was Johnny Storm's video log. "How convenient" to quote the Church Lady. He just had the foresight that he was going to die and put this thing together, even naming Peter Parker as his replacement! I just don't buy it. And if Spider-Man's going to be on the team at a place where "everybody knows [his] name" already, why, why, why does he have to keep his mask on the whole time, especially during dinner?! If Peter didn't have a sweet job at Horizon, I'd be more on board with him being a part of the Future Foundation. There's only 24 hours in a day, dude.

Since I already brought up dinner, I have to mention the deplorable multicultural "prayer" offered by Alex Power. He mentions God, Jesus (by inference only, not by name -- too divisive I guess), the Ancient Ones, evolution, random-chance, and even the Devil. All the while, Sue and Reed are smiling proudly at his politically correct behavior. The fact that the different cultures and even species can coexist peacefully and work as a team, even function as a family is commendable, but equating that everyone's belief system is equally valid is another thing. Without even getting into who's beliefs are "correct" or not, implying that Jesus and the Devil are equal and compatible is INSANE. They can't all be equal at the same time in one person's mind, because what that really means is that none of them really mean anything to the individual. Maybe that's the point. Wouldn't it be more "tolerant" to have each individual pray according to their belief (or unbelief) and be respectful of who they are, even if you don't agree?! If I thought this was more than a one-time occurrence, this scene may have drove me away completely.

If Valeria wasn't annoying enough already, now we have Nathaniel Richards back (from the future no less), so he can tell Reed what he's doing wrong all the time. Why? Because he already knows what's supposed to happen. A prime example is having Doctor Doom join the group!!! More insanity. Maybe Reed should have been the one to have "died", because he seems pretty ineffectual as a leader right now. I do agree with his Dad that terraforming the Moon is a "terrible" idea. What right does he have to mess with the Moon?! That whole dinner table exchange was silly. Is this Eight is Enough or Leave it to Beaver? I think Hickman is trying too hard to emphasize the "First Family", by eating dinner and playing video games together. I think you can show the familial love and affection, without showing all the "normal" daily activities. Next issue, Sue goes grocery shopping at Aldi's (because she can save 30 to 50% plug plug).

Last but not least, let's talk about the value. The book was $4 for 29 pages and only 24 were actual story pages. I usually expect a four dollar book to have like 32 pages or something. We had a two-page credit page, it looked nice, but what a waste of space -- it's not like a television show where the opening title sequence is that important. Then we had the two-page silhouette roll call, not terrible, but it made me feel a bit gypped. None of these "extras" would have been an issue if it had only been three-bucks.

Not a promising start. Nice to look at, but conceptually there are a lot of problems. Hopefully, next issue will be better.
Posted by Matthew at Saturday, March 26, 2011