Welcome back to Comics And… It been a long time since I wrote anything about comic books and a lot has changed for me since I last reviewed a book. My taste in reading material has changed as I’ve grown older, had a child, and transitioned from a high school teacher to an archaeology graduate student. My first review on this side of my life is not a glowing one and has even inspired me to re-read an old favorite to make sure I hadn’t been forming my expectations of the creator’s work from nostalgia. Let’s dive in!

This review deserves a little bit of background before I get into too much detail as my impressions have been somewhat colored by circumstance. Jim (my Dad) gave me this book years ago and I just hadn’t gotten around to reading it until now. I had gone to see the recent Justice League movie with my husband and son and was so happy with how much fun my son had watching it that I decided to peruse my bookshelf for a hopefully similar story. I saw the Trinity book, saw that my old favorite (from Mage) had written and illustrated the story, and briefly flipped through to make sure it was 5-year-old appropriate. At a glance it seemed fine so my son and I sat down to begin reading.
The story, for those who haven’t read it, is meant to take place early in Batman and Superman’s careers. It is also the first time Wonder Woman interacts with either Superman or Batman.

Matt Wagner’s art has improved since his Mage days. I still enjoy the sharp contrasts and the simple line work. While Wagner isn’t my favorite artist he gets the job done. His art enhances the story (outside of a few awkward panels) and he has a talent for conveying meaning without words. The other good point was Superman. Superman is written true to character and has a couple of humorous moments.

Now, the bad (and awful)

Okay, I could easily poke holes in the plot (melodramatic, doesn’t make much practical sense, jumps around oddly) but you can easily tear most arch-villain plots to shreds. I believe in relaxing and enjoying my comics and while the plot could have been improved, I can let it slide.
The characters, with the exception of Superman, were terrible. 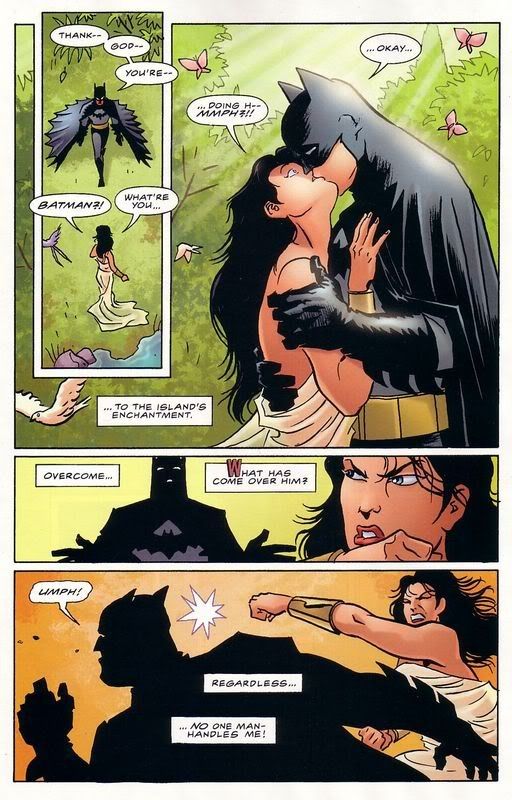 Batman – yes, Batman is dark and brooding, especially in contrast with Superman. However, Batman is still supposed to be a hero. Not only has this version of Batman been spending too much time in the Frank Miller universe, he also has a scene with Wonder Woman that is disgusting. The best I could do was use it as a teaching moment and explain to my son that Batman deserved to get hit in the face by WW after forcibly kissing her (after running across her bathing in a stream…). I had a lovely time using one of my son’s heroes as an example of what he should never do to someone. Matt Wagner vaguely states Batman was overcome by the “island’s enchantment” and then fails to explain what that is. Furthermore, this in no way contributes to the actual plot or even to character development.
Wonder Woman – She has a few decent moments but spends a majority of the story chained up, helpless, sexually harassed, and fawning over Superman. Punching Batman in the face was one of her better moments.

Ras Al Ghul – What the heck Wagner?!? I had to skip over or modify pretty much every work of Ras’ mouth when he’s around Wonder Woman. At first, I thought I was maybe reading too much into it: “Ubu, incapacitate this… colorful young woman. Have her bound and brought to my chambers. She should provide several hours of amusement…” I mean maybe he’s just a sadistic torturer rather than a rapist? Which isn’t better really, but I have never seen anyone portray Ras as a rapist before. Then later in the story WW herself sums up a later speech of his, “He plans the death of millions alongside my rape, smiling all the while.” I just skipped/altered a lot of these lines while reading to my kid. Ras was always at least a bit redeemable because of his love for his own daughter and deceased wife. Previous versions of Ras have always treated women with respect (at least the stories I grew up reading). Much of Ras’ appeal as a villain (while written by anyone else) was that his message was compelling. He is not compelling as poorly written sexual predator.

After enduring this book, I decided to re-read Mage. I was worried that I had a skewed memory of Mage as an awesome book with a pretty amazing teenage girl as a major character. Had Wagner always written women into the same ways he handled WW? To my great relief the answer was no. Edsel was as cool as I remember her. She was never meant to be a long-lasting character of course (and I’m sure the Alex in the fridge crowd would argue she was used as a plot device – but quite frankly all the characters in Mage are just plot devices – pawns on a chess board). I always loved Edsel and her glowing baseball bat (I always liked her way more than the main character) and I am glad I can still enjoy Mage as a fun comic book.

Perhaps it would be better if Wagner stuck to his own creations. He seems to do better with them.