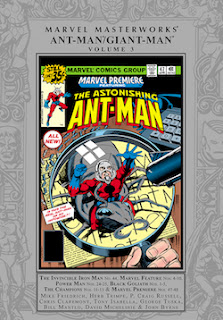 As much as I love Marvel Omnibuses, I have to admit that Marvel Masterworks (MMW) is my preferred hardcover of choice these days (a change from 4 years ago), especially now that they're delving into Bronze-Age goodness, both familiar and unfamiliar.  I seem to be getting almost every new edition and when I do skip one, I end up regretting it when it goes out of print (OOP) [Like Luke Cage vol 1 - "sob"].  I also tend to be a completest, which means I'm loathe to begin collecting something that's already started.  Although, sometimes that is unavoidable.  A recent acquisition was MMW Ant-Man/Giant-Man Vol 3, which came out just about 2 months ago.  The fact that I finished it in just about a month (including a week away from it while on vacation) is a testimony to how much I enjoyed it.

It is thought that this is the last of the three volumes in the series.  The first two focused on Hank Pym's adventures from Tales to Astonish (ToA).  I wish I had these now (both are getting pricey) and the Essentials' (phonebook) versions I do have are almost unreadable with the blurry printing and lack of color.  The biggest draw for me was the short-lived Ant-Man solo series presented in Marvel Feature circa 1972-1973.   To my recollection, I had never heard of these stories before (much less read them), thinking that they were old ToA reprints similar to the Human Torch series of the early 70s.  And I was especially ecstatic to learn that the first few stories were drawn by the late, great Herb Trimpe! [more after the break]

After a Roy Thomas/Ross Andru one-off, back-up tale that appeared in Invincible Iron Man #44 (Jan 1972), the Ant-Man stories begin five months later in Marvel Feature #4 and run thru #10.  All the tales are written by Mike Friedrich.  The main plot point is that Hank gets stuck at a small size and spends the bulk of the series trying to find a cure to his condition.  Don't sweat the details here, but Peter Parker was around when it happened.

Ant-Man encounters various dangers ala the Incredible Shrinking Man TV series (the inspiration) and has to be pretty inventive to get out of his predicaments.  Herb's issues were #4, #5, and #6 and they are fantastic!  This is Trimpe in his prime storytelling best (during his later Hulk tenure) and I relished these stories, posting my pleasure on the Herb Trimpe Appreciation Society Facebook page.  One really cool moment is when Ant-Man uses a nail to disable a crook who was about to step on him (OUCH!).  That nail becomes part of his handswen, Flash Gordon-esque, swashbuckling costume (his original was torn by a hawk).  Sadly, Trimpe left the series too soon, only to be replaced by a capable, but unrecognizable, newbie, P. Craig Russell. (Everybody's got to start somewhere -- it's not bad, but in comparison to the outstanding work he'll later do, it's a bit of a shock.)

One issue (#8) has a framing sequence around a reprint of the Wasp's origin, which unfortunately wasn't included.  Janet was mutating into more of a Wasp form, and here I thought that was a new concept just prior to Heroes Reborn, circa Avengers #400.  End of story, Hank is back to normal and Janet is trying to seduce him out of work.  Not a bad place to be.  This was a Hank that loved Janet wholeheartedly, you know "Before the Dark Times, before the [Shooter wife-beating era]".  I really enjoyed these stories, but they do have some interesting plot holes.  I guess you can blame Hank not having a secret identity, but when he's stuck at a small size, he encounters villain after villain, not that far from his house! Also, Peter knows Hank is alive, but Janet (and the world) believe Hank to be dead from an explosion.  Peter, you work at a newspaper, you know.  The plus-side is when Janet is being creepily propositioned by her chauffeur, who is secretly the criminal Whirlwind and is out for her money, ready to step in to "take care" of the grieving widow. They also never explain why Hank is taking a break from being Yellowjacket.

There's a brief appearance of Bill Foster in issue 9, who once helped Hank when he was stuck at Goliath-size back in the Avengers.  This provided a nice rationale to include Bill's Black Goliath appearances in the volume.  It starts with a two-part Power Man tale (#24-25), followed by his five issue Black Goliath solo series, and the after cancellation follow-up in the Champions (#11-13).  I was pleasantly surprised at how much I liked the BG stories.

Did you know he was once married to our favorite Marvel Netflix special guest-star character, Claire Temple?  Yeah, and he tries to get her back (from Luke) by lying to her that he's stuck at 15-feet tall.  They encounter the Circus of Crime (I'd buy an Omnibus of their appearances).  Tony Isabella and George Tuska designed the character.  (I have more of an appreciation for Tuska's work then I did as a kid.)  He's operating out of LA in his series and runs a lab for Stark International West, which includes his own gang of assistants with interesting personalities.  One of them is based off of the humorous "Herbie" character -- the dweebish one.  In a breath of diversity, the woman assistant is from Bangladesh.  Issue #2 thru 5 were written by Chris Claremont, and while Tuska left after the third issue (just like Herb did for Ant-Man), the last two are well-rendered by Rich Buckler and Keith Pollard.  Keith inked his own work and it was phenomenal!

The basic story is that BG is wrestling with whether or not to be a hero, while trying to stop some thieves stealing vital components from various labs. Eventually, they steal a mysterious box from Bill's lab, that Tony didn't even reveal to him its contents.  Like all good Bronze-Age tales, there are ample panel note references to other continuity stories.  The cover to #4 by Jack Kirby is especially awesome, although it reveals a variable element in the series, namely his size.  He's supposed to be 15-feet tall, but I think some artists draw him much bigger. Back to Stilt-Man, believe it or not, but he's presented as a real formidable foe!  Who knew?  I thought he was C-List all the way.  He's also clever enough to create the terrible Z-Beam, which seems to disintegrate BG and friends at the end of the issue.  Turns out the "Z" must stand for "Zeta", since it transports BG to an alien world (the Pollard issue).  Typical Claremont moving the story in an abrupt fashion to get to where he wants to go.  Why go from point A to B to C, when you can jump to D and flashback the rest.  (Anyone, remember Uncanny X-Men #190?)

Black Goliath #5 is cover dated Nov 1976 and his first Champions appearance in #11 is cover dated Feb 1977 (there's that magical year again).  It's three months for the readers, but its only "last week" for BG.  He must have boned up on his studies during that time, because he was firmly established as a Biochemist, but somehow he's got the engineering skills to design the Champions flying vehicle!  Said vehicle that crashes into him, due to faulty manufacturing (actually sabotage if I remember correctly [eventually revealed in Peter Parker #17 and 18]).  The missing box plot thread is picked-up by Bill Mantlo and it turns out to be The Stranger's ever-expanding Null-Life Bomb.  Now these are the first stories in the volume I had previously read, but it was nice to be more attuned to the Black Goliath angle (much like watching Marvel movies in character sequence, it changes how you experience the ensemble films).  The issues feature John Byrne's early Marvel work, magnificently inked by Bob Layton.  The Champions are a really messed up bunch and consist of Hercules, Black Widow, Ghost Rider, Angel, and a pre-21st century ret-conned, then fully heterosexual, Iceman, mooning over the Russian Darkstar.   These stories are great, except for the apparent demise of Warlord Kaa, the shadow monster from Incredible Hulk #184 and my Trimpe Godzilla commission. (I'm sure I could still think of a way for him to encounter the big-G in continuity...) 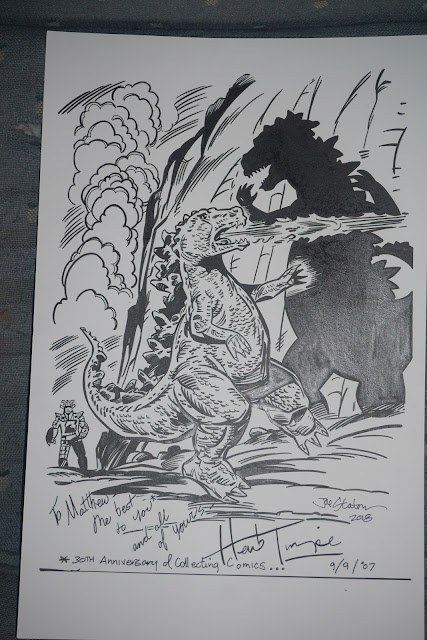 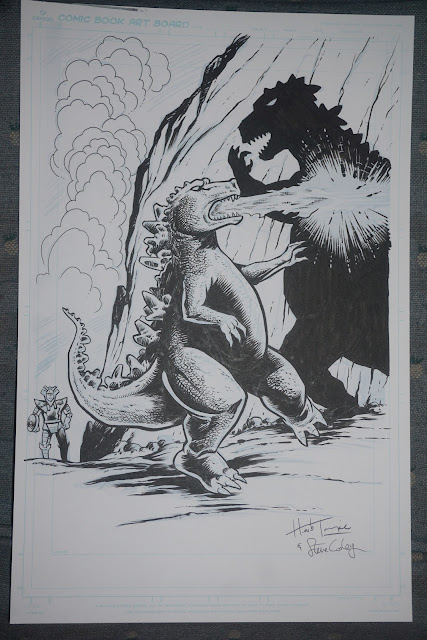 The last two tales spotlight the first appearance and origin of the Scott Lang Astonishing Ant-Man (and now movie star) from Marvel Premiere #47 and 48 (April/June 1979), solely created by David Michelinie, who was rocking out some of the best Iron Man stories of all-time back then.  John Byrne and Bob Layton are on hand again for the excellent art.  Bob did the iconic cover and in my opinion should also get acknowledgments at the end of the films.  There is also two unpublished Layton covers for #48 included in the book's back matter.  Both are superior to the one published.  Michelinie recounts the origin in the MMW preface - he was originally going to name him Scott Land, but Bob misheard him in a bar and thought he said Lang, mentioning a potential tie-in with another Marvel character.  And that's how history is made, folks.

The story is great.  Scott is released from prison after doing a 3 to 5 stint for burglary, and quickly reconnects with the love of his life, his daughter Cassie.  Things are going great until she falls ill to a potentially fatal heart ailment.  As the bills mount-up, he looks to steal some money and discovers Hank's Ant-Man costume instead. He uses it to try to rescue a kidnapped doctor, that could save Cassie's life, who is being held hostage by Darren Cross to perform repeated heart surgeries.  I remember these issues fondly and they're like comfort food to me.  It turns out that Hank (like in the movie) saw Scott steal the suit and when he see's how well he uses it, let's him keep it.  Scott becomes a better Ant-Man in my opinion, until some writers (Geoff Johns, I think) screw things up for him. I guess it's fitting to end with a Scott tale since Hank is passing the Ant-Man torch to him, but boy would a Scott Lang focused masterwork be great.  It would include some of my favorite stories from Avenger's #195-196, and Iron Man #131-132.  Not that I need it, I certainly have those tales in other forms already.

The whole book was a wonderful read and I highly recommend it to Bronze-Age and Ant-Man fans everywhere.

{This post was proudly brought to you by The Fixx's Shuttered Room and Reach to Beach and Phantoms LPs, playing in the background.}