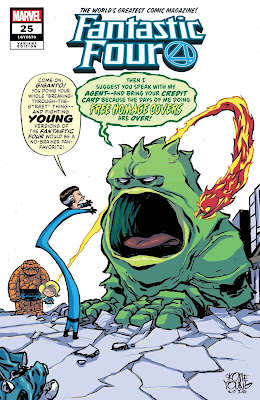 The Empyre mini-series was quite good and the FF were involved heavily (along with the Avengers).  The big takeaway is that Ben and Alicia have now adopted the young Kree (Jo) and Skrull (Nicki) children that had been the historical fighting repository of their collective races.  The two of them used to beat each other up in front of large crowds, now they're brother and sister.  Meanwhile, Reed and Sue's offspring are no longer children, but teenagers.  Franklin (a mutant) is called Powerhouse (he's been spending some time on Krakoa [Hickman X-Men-verse]) and Valeria is called Brainstorm (she's smarter than her dad).  Reed and Sue were out exploring for a long time (and thought dead by Ben and Johnny).  Their return was what happened at the beginning of the series.  Oh, and Johnny has found his "soulmate" (a term I hate and emphatically disagree with), some girl with wings. The previous issue (#24), which was also super entertaining, featured an untold tale where Iceman joined the team during one of Johnny's teenage "I quit" hissy-fits.  There you're all caught up!

Dan Slott is really skilled at writing dialog and every character has a unique voice and some of the exchanges between them can be quite humorous.  That's a big draw for me.  Oh, I enjoy an interesting/complex story or action packed one too, but characterization is what I like the most.  And it's an essential component to a successful Fantastic Four run.  Slott succeeds on this front and he also delivers the action too!  He and whomever he's blessed with doing the art, and boy has he had some great artists on this series.  This issue R.B. Silva (of Powers of X fame) joins the series, and Paco Medina (of Avengers: No Road Home fame) departs.  Both are excellent and their presence indicates that this series is truly striving to live up to "The World's Greatest Comic Magazine!" cover tag line.  Or to put it another way, Marvel is putting some of their best talent on this book and it shouldn't be overlooked!

Someone has sent a powerful alien to retrieve something from earth and in their search craters the Baxter Building!   And a secret (and dangerous) experiment of Reed's (circa the FF #51 timeframe) is released, the Zero Force!  And in the end the Forever Gate is created, " . . . a doorway to every point in space and time."  Oh the possibilities for exploration for our team of imaginauts.

Sounds exciting, doesn't it.  But wait there's more!  The FF showoff their new uniforms (an improvement I'd say).  Sue goes on a stealth mission for Nick Fury to Doom's embassy, meaning Doom appears too.  Ben and Alicia decide to homeschool the new kids. She-Hulk helps out in her Byrne-era FF costume.  Reed and Sue talk about secrets.  And Franklin . . . well, I've got to leave some surprises.

R.B. Silva seems to be channeling a bit of Michael Golden from his Micronauts days, especially the way he's drawing Sue and Val's hair.  Anyway, it's just outstanding all around (with a fine mixture of one and two-page spreads [splash and panel layouts]) and the coloring is top notch too.  It's sumptuous without being distracting.

At the end of Empyre: Fallout Fantastic Four #1, the post-credit scene had Uatu the Watcher, whose been dead since the Original Sin storyline (2014), pop out of the Unseen's eye.  We get a nice recap of that story, where Nick Fury killed him.  "A reckoning is coming . . ."  So, the Watcher transforms the Unseen back into Nick Fury, where he'll be his herald.  (When you consider the standoff between Galactus and Uatu way-way-back, it's cool to think of the Watcher having his own herald too.)  There's a nice two-page spread that shows images of lots of recent goings-on in the Marvel Universe.  I'm sure this story will probably eventually build into the next big event, but it's always better to have them occur organically, rather than force-fed down your throat.  If you want to get on board sooner, rather than later, this is the time.

The "Fantatic Forum" page is tied to the letter's page (nice that they still include them) and going forward the different characters in the series will answer the reader's letters using cute little FOJIS (Fantastic Four emojis) .  Unless your the late-lamented Unbeatable Squirrel-Girl, the letters pages are rarely include in any collected edition, so that's another reason to get the single issues now.  These promise to be fun.

Finally, let's talk about the covers.  There were four (ironically):  An Alex Ross timeless variant portrait of Blackbolt, Mark Brooks (new regular cover artist), Nick Bradshaw (former regular cover artist - unfortunately, this was an expensive 1 in 50 variant), and the Scottie Young one shown above.  That's the one I got.  It's just funny.   And I love cartoon art, just as much as I like realistic drawing.  I plan to eventually be able to do both myself!

Well, thanks for taking time to read.  It's took longer than I expected (as always) and I'm pretty rusty, but I think I can get a few hours of sleep in now before getting ready for church.

"Be Seeing You" -- to quote the Prisoner.