You know, this week I was all set with this really long review of "Children of Men". Lots of details, solid exposition, and then... well work got busy and I forgot the draft there. The short version, the first half is really a character study with great details about how the world has changed people. If you liked Orwell's 1984, then this is for you. NOW, the second half of the story, which the movie is based on it completely different. I haven't finished that part yet but a complete review when I do.
So, this week I shall show off the latest acquistions. I visited a friend, and after much horse trading, I came home with the following... 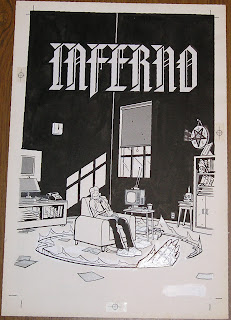 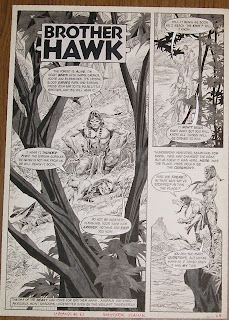 On the left, we have the cover to Stig's Inferno #1. Stig's Inferno was publsihed by Vortex, a Canadian independent, in the early 80's. The story was written by Ty Templeton and this cover is by Paul Rivoche. Paul is best known in the comics world for his work on Mr. X. Currently he does animation and was involved with the Batman animated series.
On the right we have a page from Vamperella #61 with pencils by Carmine Infantino and inks by none other than Alex Nino. What a great combination! The subtlty of the inks is lost because I don't have a scanner big enough for the art. Actually I don't have a scanner at all but that's beside the point.
Next up... 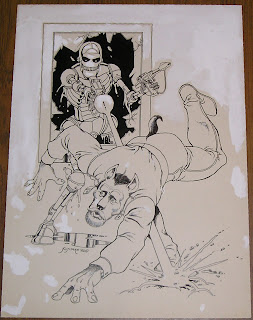 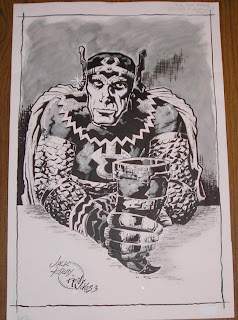 On the left is a house ad for the series Dalgoda. Another mid 80's series, the art is by Dennis Fujitake. Dennis's art is all over the fanzines from the era. He tried to break in but could never make the big leagues. To bad, because his art was very nice. Currently, he is taking commissions if you want something.
On the right we have Loki by Neil Volkes. What really makes this piece interesting is the pencils are by Jack Kirby. Neil actually inked via light box but I think that it came out well. This was originally published in a book Jack Kirby's heroes and villians where modern artist inked Kirby pencils. I feel this piece worked very well.
And finally, in a shameless plug, my Adam Hughes Red Sonja sketch. Very nice indeed... but going on ebay sometime soon. Unless, someone else wants it! 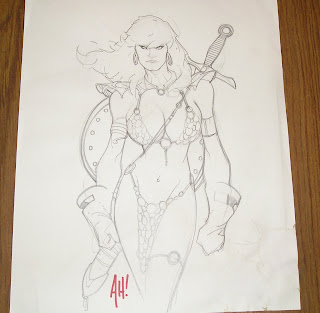 Well, those are some of the pieces in my art collection. I hope you have enjoyed them. Sorry for the poor images but its the best I can do with a camera!