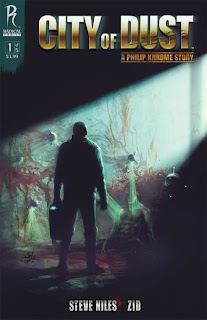 First and foremost let me just say this book is great. It drips with coolness. This book combines a future setting, film noir, a Frankenstein story line, a fascist government and Fahrenheit 451, stirs gently and produces a book that you should buy, take home and read and enjoy a great story.
The first thing that usually draws me to a new book is the writer and Steve Niles is a proven winner, with Simon Dark, Gotham After Midnight, Dead She Said and on and on and on.
The second thing is the artist and I was unfamiliar with Zid, but I could tell from his cover that he was an excellent artist and he really delivers.
The third thing is the premise. "From the dark mind of STEVE NILES (30 Days of Night) comes a story set in the aftermath of our world's collapse. This chilling vision of the future unveils a world where the police now patrol for crimes of the imagination. Religious beliefs, along with any tales of false heroes, idols or gods, are illegal. The world is anew and the enemy adapts. Detective Philip Khrome doesn't enforce Imagination, he works homicide; that's where the action is, and he's seen it all before. But criminals evolve and the world's forever changing. When a killing spree hits his city sector, Khrome finds himself face to face with killers born of grim reality with old world superstition and everything is not what it seems. " This is right up my alley and I'm interested going in.
The final element is the publisher. Radical Comics has proven that they will deliver a quality product. From selecting strong premises, to finding artists that just deliver superb rendering to the actual production value of the book. You can almost just order any new series from Radical knowing that it will be professionally done and a superior product.
This story opens with Khrome killing a criminal because he thought he was drawing a weapon and it turns out he was reaching for a cross. Fortunately the automatic court and trial that Khrome's computer runs said the person's verdict would have been death anyway. But the event causes Khrome to start questioning the government and what he, as a police officer, enforces as the law. The next part of the story we get to learn more about who Khrome is and find out he rather have a hooker for his girl friend then the hottest cop on the force. Khrome's association is also illegal, so we establish he is willing to not follow all the rules. At the same time there is a killing spree going on in the city and we find out that some Frankensteinesque monsters have been killing people. The story ends with Khrome investigating an area that it appears these creatures have been and finding a book. Worse he decides to read it against strict orders and is caught by the higher authorities reading it. What a great start to a new series.
Zid's art has a strong realistic quality to it and is very easy on the eyes. When we met Khrome's girl friend you understand why he would want to be with her, no hetro male would not want to be with her. Zid pulls off the futuristic setting and manages to make it film noir all at the same time. His work is as strong as the movie Blade Runner was for creating a dark film noir future.
The actual story will remind you of a good old time detective story and Judge Dredd, all at the same time. Overlaid with some solid Orwellian themes of an oppressive central government. I loved the first issue.
Overall Grade A
Tagline: Film noir meets Judge Dredd and we win.