Jim: I actually found it hard to do this Preview Review as I felt Dark Horse had little to offer that was of true interest for me. Some months they can be the most dynamic group and other months very little. Maybe Lee will add some books.
Lee: I’ll do my best. We all know that I can add a million pointless books for no reason. But, it should be noted since neither of us read/collect Star Wars that eliminates half of the DH offerings. 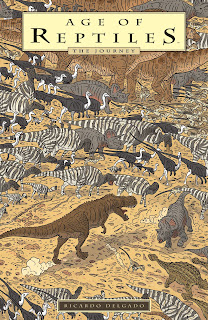 AGE OF REPTILES: THE JOURNEY #1 (of 4)
Ricardo Delgado (W/A) and Jim Campbell (C)On sale Nov 432 pages $3.50 Miniseries
Dawn breaks over a sprawling forest in Cretaceous North America--a dawn far colder than its peaceful, forest-dwelling herbivores are used to. The seasons are changing, and it's time for the able-bodied to migrate south. But the trek is a dangerous one even when massive herds band together, for while there is safety in numbers, numbers also draw attention, and the carnivores are moving in! This journey may not last long when the first hunter arrives, a ferocious tyrannosaurus rex who has her sights set on a young triceratops!
- Ricardo Delgado--a prolific development and storyboard artist who has worked on such hit films as Men in Black, The Incredibles, WALL-E, X-Men Origins: Wolverine, and the Matrix series--returns once again to his critically acclaimed, Eisner Award-winning comic series, Age of Reptiles!

Jim: Being unfamiliar with the previous series I find it hard to be excited about a book about Dinosaurs. I don’t see a lot of compelling dialogue.
Lee: The original series is outstanding. No there isn’t a whole lot in the way of dialogue but the visuals are amazing. Delgado is second only to Stout as a dinosaur illustrator. This will be very, very good.
Jim: But I don’t want a book about reptile living, no matter how good the art is, where is the story? I guess this will be like watching the nature channel. 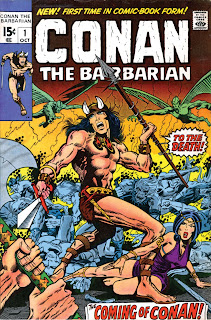 Jim: See I love this book and I hate it. I have this material in other formats, but BWS in a hardcover and I’m sold. Wonder what the heck Barry is up to currently.
Lee: Don’t know what BWS is doing but I am excited to get this. I don’t “need” another $50 hc but I definitely NEED this. I just hope they fixed the coloring issues they had with the tpb versions.
Jim: Recent update says they will not be using the original color palette, for $50 I want to know what the heck they are doing. 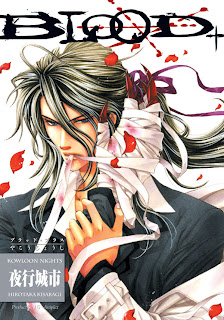 BLOOD+ KOWLOON NIGHTS
Hirotaka Kisaragi (W/A)On sale Jan 20 b&w, 176 pages $9.95 TPB, 5" x 7"
In his years as a Hong Kong police officer, Nishi Tatsuyoshi has never seen murder victims like the ones being found in the abandoned Kowloon Walled City. Bodies completely drained of blood are showing up every few nights, and rumors of vampires are swirling. The closer Nishi gets to the truth, the more obstacles are thrown in his way. Someone doesn't want him to discover what's really going on! Forced into an uneasy alliance with the Chiropteran-hunting Red Shield organization, Nishi works with a mysterious cello player named Hagi as they try to find the source of the murders and bring down the Wong family--which peddles a miracle drug they claim will give users immortality!
- Hot on the heels of the wildly successful Blood+ and Blood+ Adagio manga series and Blood+ anime series, Blood+ Kowloon Nights features Saya's lover, Hagi, in a gripping solo adventure that takes place in the years between Saya's infamous Vietnam incident and the events in Blood+!
- Dark Horse has sold over 70,000 copies of previous volumes of Blood+!

Jim: I choose this for three reasons. One; does it really matter if they sold 70,000 copies to other people, what others buy does not interest me unless I’m reading their opinion on why they liked it. Two, I assume that there will be buckets of blood. Three I was looking for books for this list.
Lee: Well, lets see (1) Selling 70k + is enough to make me investigate what people are saying about a title. It’s a huge mark and it peaks interest which could lead to a future sale. (2) Why would you assume lots of blood? It says people were drained of blood. I picked ‘Goth’ two months ago for buckets of blood. (3) No one likes you anyway… ooops wrong response to three. Do over… AND (3) It piqued my interest. So maybe this worked out afterall.
Jim: No one likes you either – brrapppp!!!!! 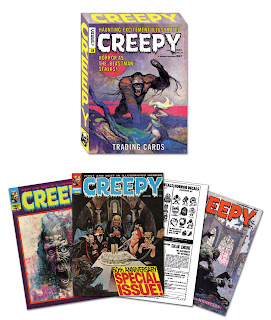 CREEPY TRADING CARDS
On sale Jan 27 Boxed in a set of 50 cards (42 cover cards and 8 ad cards)$14.95
We have kicked open the crypt door with the archival hardcover collections of macabre and unusual stories from Creepy, where the only "shaggy dog tale" to be found involves a werewolf or two.
Long esteemed by comics and horror fans for their deft art and twist endings, perhaps the single most stunning element of any issue of Creepy was its cover. Starting out with a memorable first-issue cover by Jack Davis, the magazine quickly found itself with none other than Frank Frazetta as its main cover artist, which was a move everyone found exciting. But Frazetta wasn't the only great cover painter--he was followed by a host of others, such as Richard Corben and Ken Kelly, to name just two.
Another fun component to any issue of Creepy was the mail-order ads for odd merchandise from a variety of sources. These goofy ads still give one a nostalgic chuckle.

Jim: Isn’t this fad long over? I mean really my store never has cards on the counter and I know of no one who gives a crap about collecting cards anymore.
Lee: I, ruler and almighty force of Comics And nature, declare the card wave… DEAD!
Jim: See it is dead. 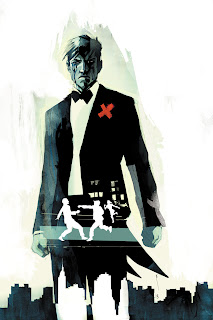 DEADLOCKE
Arvid Nelson (W), Nick Stakal (A), and Jock (Cover) On sale Nov 18FC, 32 pages $3.50 One-shot
In modern-day New York City, a ragtag group of rebellious teens throws its annual raucous Weimar bash filled with debauchery, booze, and bloody knuckles. Going for the first time is Locke Vinetti, a newcomer to this band of bored rich kids--a loner who usually prefers to escape into the world of his alter ego comic book creation, Deadlocke. Under the tutelage of the group's charming but unpredictable ringleader Casey, Locke has learned to express his art, and his angst, in ways he never thought possible. As the violent energy of Deadlocke continues to storm up inside of him, Locke must learn to control his newfound strength at the risk of losing Renee, the darkly beautiful girl of his dreams. Determined to prove that Deadlocke's rage will overpower Locke's love, Casey provokes Locke in a brutal rooftop battle where their lives, and their souls, hang in the balance.
Based on the Simon & Schuster young adult novel Venomous by Christopher Krovatin, Deadlocke teams comic writer Arvid Nelson (Rex Mundi, Kull) with Nick Stakal (Criminal Macabre) in a story of a young man coming to terms with his own demons in a search for his true identity.

Lee: This was the only book I could add this month. It sounds interesting and full of character development and action. Then I noticed it was 32 pages long. 32 pages???? Read the description and tell me how they are gonna cram all that in 32 pages. Maybe each plot point gets one panel in the book.
Jim: The synopsis is the actual comic book. 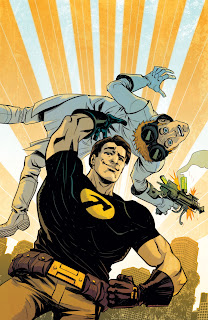 DR. HORRIBLE
Zack Whedon (W), Joelle Jones (P), Dan Jackson (C), and Kristian Donaldson (Covers) On sale Nov 18 FC, 40 pages $3.50 One-shot
From the Joss Whedon-helmed webmovie Dr. Horrible's Sing-Along Blog comes the origin story of the next greatest supervillain of all time . . . DR. HORRIBLE!
In this one-shot comic, Zack Whedon and artist Joelle Jones (Token) establish how a young, impressionable, but brilliant Dr. Horrible was drawn into a world of crime. Readers are reacquainted with the charming, brawny, crime-fighting superhero extraordinaire Captain Hammer when Dr. Horrible crosses paths with his greatest enemy in an all-out showdown of immeasurable proportions. Special guest appearances include Dr. Horrible's love interest, Penny; his sidekick, Moist; and a meter man.
Fans of Joss Whedon and the smash-hit musical Dr. Horrible's Sing-Along Blog will not want to miss this!

Jim: So is Zack, Joss’ kid, a nephew or brother. I mean just because he has the same last name does not mean he can write. It’s like when Tom Clancy puts his name on top of a book and he is just presenting the book or it is written in Clancy’s universe or whatever it is.
Lee: I’ve heard Dr. Horrible's Sing-Along Blog was good but I’ve never actually been there. Maybe, if I had then I would be more thrilled to see this, but as it stands I really don’t care. 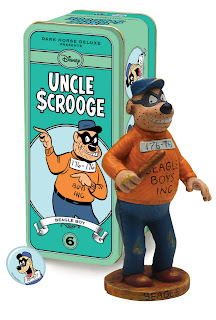 UNCLE SCROOGE CLASSIC CHARACTER #6: BEAGLE BOY
On sale Jan 20
Packaged in a special litho-printed, full-color tin box with a vintage-style pin-back button and bookletLimited edition of 650 numbered pieces$49.95
We're giving one of the comic-book medium's most revered casts of characters the Syroco-style treatment in this series of statuettes based on the classic Uncle Scrooge comics. Our sixth and final character in this series is Beagle Boy. The Beagle Boys were a gang of buffoonish criminals, only identifiable by the prison number plates on their chests. They were a constant threat to Scrooge's riches, and are probably still trying to pull the perfect heist to this very day.

Jim: Com’n Lee, this can not be a real character from the duck books. Beagle Boy?
Lee: That’s a fake comment to drag a post out if I’ve ever seen one. Good try but you’ve been around to long to not know the Beagle Boys. The others I’ll give ya… not this one.
Jim: Okay, but I barely remember them. 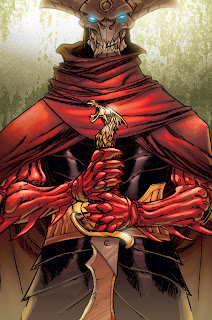 END LEAGUE #9
Rick Remender (W), Andy MacDonald (P), Matthew Wilson (C), and Eric Canete (Cover) On sale Nov 4 FC, 40 pages $3.99 Ongoing
With the hammer of Thor in his possession, the Smiling Man sets out to remake the world in his image, unless Codename Black can stop him. Dead Lexington's manipulations force Prairie Ghost and Brother Occult to choose between mass murder and the fate of all life on Earth. Zeus sends his only daughter, Divinity, to destroy her former allies and obtain the hammer for Olympus. Soldier American finds himself a POW of Wolfsangel--in 1942. The deck is stacked; there is no possibility of victory--the end draws nigh for the End League. Brought to you by the super champion of America, Rick Remender (Punisher: War Journal, Fear Agent), with art by groundbreaking rising star of comic bookery Andy MacDonald (Punisher: War Journal, Miss America).
Series finale!

Jim: This cracked me up. It is listed as an ongoing series, but it is the finale. At this point call it an unwitting limited series. Heck I think this book ended up with three different artists.
Lee: What a crash and burn this turned out to be. Way to long between books, way to many artists. This is labeled disaster.

Jim: A pretty blah month for Dark Horse.
Lee: Considering I only added one book, I would have to agree the month is blah. Actually, if it weren’t for the Conan hc then I would be truly disappointed.
Posted by Jim at Friday, September 04, 2009