Are secret identities necessary? On a whole, yes. I mean I can just imagine how much duller Superman would be without Clark Kent. Not every hero needs a secret ID of course, but I find that the heroes who do have them are more interesting by far.


Lets take a look at heroes who have no secret ID. 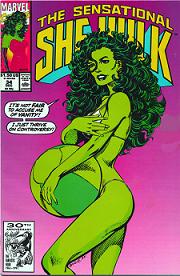 
This book was BORING until they brought Jennifer Walters back. Seriously, I never could care about the glamourous world of She-Hulk and liked this character A LOT more when she had to be Jennifer again. I appreciate that Jen prefers She-Hulk but that was part of the reason it was interesting to give her a human side - it helped you to empathize with her character. Not to mention you got to discover the character all over again. As much as Jen isn't a "secret" ID (at least not anymore) the character is much more interesting without just She-Hulk.


I like Wonder Woman, I really do - but I have a hard time caring about the day in the life of an Amazon Princess. As much as I enjoy WW I could never relate to her character. She's one of the celebrity superheroes and as such she's seen as "above" humanity rather than beside it. I think this is one of the major flaws of the heroes who don't have a secret ID. Of course with this character her secret ID has always been a bit of an issue as she's always WW first and when she does have a secret ID it's little more than a facade. The only time her secret ID was convincing was in the silly WW hippie comic era with her wacky clothing and martial arts instructor. Of course those books are some of the most fun.


This is another character who has had some issues with the whole secret ID thing. As much as she really hasn't needed it I wish they had been able to do more work pursuing Kara as Linda Lang and this was a fresh twist on Kara's character. Without a secret ID it was difficult to fit Kara into the whole Earth thing. Obviously she doesn't need this on New Krypton, but everyone there has superpowers and there's no real reason to find a different way to relate to the main population. Of course I always loved Peter David's work on Matrix/Supergirl and that whole storyline was a cool way of giving Matrix a secret ID as well as really making her Supergirl. I was pretty sad they phased her character out.


As I said before, I wouldn't care for a Superman with no Clark Kent. Without his secret ID this character would lose the most interesting thing about him. Supes isn't about what he can do as Superman - it's about the fact that in spite of what he can do he still wants to be one of the people he protects. That's what makes him such a great hero. Also, where would the Superman comics be today with all the wacky secret ID hi jinks that ensued? There would be no bad jokes about the fact that Clark hid away his identity with a pair of glasses, there would be no torturing of Lois, and worst of all there would be no Clark Kent, mild-mannered reporter. The secret identity is a wonderful thing! 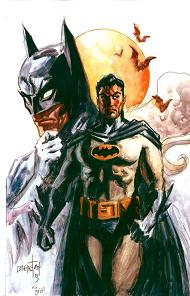 
Batman would be so much less effective if people knew who he was. I mean he'd be hard pressed to strike fear into the hearts of villains as Bruce Wayne: Millionare Playboy. I'm laughing just trying to picture that one. No, really, try to picture that one. If I was a villain I'd fall down laughing. Even the new Spectre said it - that somehow finding out who Batman was just made him a man behind a mask. Secret IDs allow for the superhero myth to grow, without it the heroes are just paparazzi bait. Beyond that now Dick can carry on the Batman legacy without having to do much more than change his costume. While many people do know that the man behind the mask has changed enough badguys think it's the same scary man out there hunting them down. Sadly some of the secret ID thing seems to have backfired with Hush but Dick seems to have worked that out (we'll see).


I think the secret identity is a long standing comic book tradition and is of huge importance to the superhero genre. Secret identities not only help to answer the question of how these heroes deal with the fact that their enemies could come after their loved ones but they also allow the reader to better relate to the character. Yes, there are some great heroes who don't have secret IDs (the F4 for one) but that doesn't mean it'll work for every character. I, for one, am a big fan of the secret ID :)
Posted by Gwen at Saturday, September 05, 2009