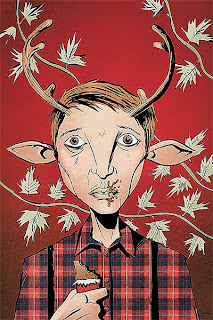 
I have been on a mini-crusade to make sure I keep my list under control. The advent of the $4 book really caused me to have to pare down my list. As Marvel and to an extent DC decided $4 was the price point I realized I need to reduce my list by 25% or more to just break even with the price increase. At more then 100 books on my list I realized that while I have a high degree of disposable income it is not unlimited. An interesting side bar is as I pare down my list I have started to realize that I don’t miss the books I have been cutting and correspondingly I have been able to not start a lot of series and have again not noticed that it didn’t really faze me. Reminds me of when I sold the vast majority of my collection on E-Bay, I hardly ever missed it once I sold it. This week alone I skipped four new books and had the intent of kicking Sweet Tooth to the curb, heck Strange Tales I did kick to the curb. Since Sweet Tooth was only a buck, I figured I would try it and then cancel it. It didn’t work out that way as Sweet Tooth was just too damn good and reading good comics is what it is all about for me.

I was unfamiliar with Jeff Lemire and had recently read his OGN “The Nobody”. I enjoyed it and hope to get a review out on that book. Still one book had not sold me on his work that much to make this new series a mortal lock. Just the cover of the Sweet Tooth had convinced me this was just dumb as the boy has deer ears and antlers and is eating a candy bar. Plus the cover shot of Gus looks a lot like Lee. Add to that the title is horrible being called Sweet Tooth and I was confident this book would not make the grade and was happy to be proven wrong.

We open up as Gus, the antlered boy, and his Dad; are living in the woods in the middle of nowhere. We learn that they live in Nebraska and some event/plague has occurred that has wiped out a lot of people. Gus has only known his Dad and no one else and has only seen his Mother’s grave. What we learn of the setting is learned through what Gus knows and his narrative of what his Dad has told him for most of the book. We are given only a miniscule amount of information and a minimal dialogue, but the pictures convey all it all. The father is dying, the son is lost as his Dad passes away and the sadness Gus feels is apparent as he has to bury his Dad. It is a very quiet opening and poignant as we learn that since the event only a few “special” children have been born and Gus maybe the only one left.

The shift in tone, pace and narrative from there is dramatic. We see Gus staring at a buck and the similarity is obvious and then a bullet goes through the deer’s head. The hunters show up and Gus takes off. The hunters chase him down and are anxious to capture him as apparently there is a reward for creatures such as Gus. As the one hunter bends over Gus, his head explodes as it is hit by a bullet and the other hunter is scared sh*tless as the new person walks into the picture with a smoking rifle.

Now this book has me interested. What the heck happened to the world? Is it the whole world, just the US? How did this plague/event cause Gus to be born as he looks half human and half deer? Since we never saw Gus’ mother was it something even worse that created Gus? Why is their a bounty on Gus head? Who the heck is the guy who shot the hunter and what does he want? How many people are left? Is there a government? What year is it? As I said the book has my interest.

Now Jeff Lemire wrote a column for the Vertigo books this month and tells us the book is about Gus who is left to survive in an American landscape that has been decimated by a mysterious pandemic a decade ago. Gus is part of a rare breed of human/animal hybrid children who have emerged and apparently are immune to the disease. Jeppard, the guy who shows up at the end, is going to try and take Gus to the “Preserve” that is a fabled refuge for these children. Jeff points out that is the premise, but the book is about a lot of things and will go places you may not expect. Jeff also acknowledges that post apocalyptic stories are a dime a dozen, but it is how tell the story and not the setting that is important.

The artwork is rather simple in the construction of its people and the backgrounds with Jeff using a more minimalist approach. Still his people are more towards the realistic side, but have a sketchier quality. The layouts, page design and construction of the artwork; does a brilliant job of telling the story. The words are often superfluous and Jeff does minimal dialogue, which makes for a fast and easy read. It is a compelling story and one that wins you over right away and you can’t help but be rooting for Gus from the jump. I still think it needed a better title, but that is a minor quibble.

Overall Grade A – A surprising low key book that changes from first to fourth gear in the span of one page and it pulls you in and wins you over. The oddity of Gus is gone immediately and you just hope for the best for him in this strange new world.
Posted by Jim at Thursday, September 03, 2009