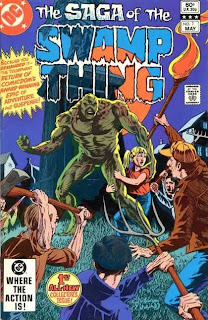 You, as a rational reader of comics, might ask yourself, why would anyone keep the hit and miss collection of The Saga of The Swamp Thing, volume 2, issues 1-13? And by hit and miss I don't mean the quality, though that's a valid supposition. No, I mean hit and miss because I missed issues 7, 11 and 12. Not that that was a detriment to keeping up with the story. This was a drawn out arc with much meandering.
But back to the question at hand. Why keep this stuff? They're not worth much, if anything. Issue 13 even has some tears in the back cover, further dropping any value it might have. (A product of a 15 year old's bike riding trips to locate and purchase comics at various convenience stores in rural central PA.) It's not even a complete run of the story arc, what with the aforementioned missing issues. In fact, it's most notworthy for being the lesser work that appeared just before Alan Moore took over and revolutionized not only the Swamp Thing but, to a certain extent, DC Comics as a whole. Swamp Thing, after all, was the comic that in time lead to DC's excellent Vertigo line. Arguably, in my happy little mind, and without a shred of supporting evidence, Moore's Swamp Thing lead to DC's re-boot known to a few people as Crisis on Infinite Earths. The success of the Swamp Thing total revision set forth a model of how a revision of the broader DCU could be successfully accomplished while staying true to its roots, puns and all.
Digressions aside, the reasons I've kept these 10 issues are twofold. First, it harkens back to the DC horror stories I knew as a kid. A veneer of horror, but nothing graphic and much in the way of just desserts to the victims. Post comics code authority horror at its cheesy finest, a la the House of Secrets and the House of Mystery, featuring the ever popular Cain and Abel.
For instance, the story that runs through the 13 issues is ostensibly about another attempt by 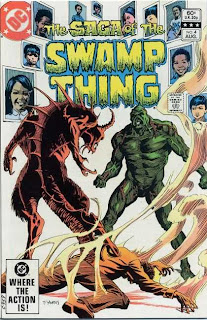 Satan to rule the world. As always, there's some anti-Christ creation to lead the way, but in this telling there's a psycho-kinetic, though mute, herald who essentially creates the anti-Christ. There's also a Holocaust survivor who was a Nazi collaborator whose loyalties are uncertain. This is different from the one and done stand alone stories of House of Mystery and the like, but the little diversions within that arc fall within the classic set up of imperilled protaganist, tragic antagonist, and punishment of the misbegotten. There are entirely pointless, if entertaining, stories about a town overrun by vampires, a demon possessing a local children's TV star (a very strange sort of homage to the child victims of serial killing in Atlanta for which Wayne Williams was eventually imprisoned), and an island that was entirely fabricated from the mental powers of Vietnam War vets who had been exposed to some chemicals during the war. Focus was a real problem for the book.
But, that does bring us to a second reason to retain these issues. What writer Martin Pasko is attempting really is a precursor to what Moore would do. He created the Sunderland Corp and Liz Tremayne, characters who would weigh significantly in the Moore stories, but his longer arc and grander story of Alec Holland's battle for personal mission and identity were well in keeping with what Moore would do. No doubt the editorial direction of Len Wein, co-creator of the character with Berni Wrightson, helped there. Abigail Arcane and Matt Cable even make brief flashback appearances in the first issue. These issues make for an interesting look at an intermediate stage between the Wein and Wrightson creation in the first volume (which, I've never seen, but gather went off the rails toward the end of the run when others were writing), and the Moore creation of the earth elemental Swamp Thing.
The art by Tom Yeats is also reason to hold on to the books. He really captures the style of the horror books of that era and uses it to its best, moody effect.
The best reason to keep these issues, though, has got to be the fact that it turned out as well as it 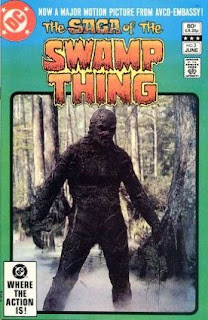 did, given that it was obviously a creation designed to latch on to the Swamp Thing movie that was released at that time. Why, the cover of the second issue is nothing but a movie promotional picture. Too bad the costume's zipper isn't showing in that picture. That and Adrienne Barbeau's heavily featured breasts are the most memorable aspects of the movie. Makes you wonder just how low a budget a movie can have and still claim to be a major motion picture.
On a final note, one thing I never understood in reading these issues is why Holland's thoughts were full of elipses, like he was having a hard time stringing his thoughts together. I understood the elipses when he was speaking because he was supposed to have difficulty speaking. In the thought balloons it doesn't make sense. He's not brain damaged. Well, beyond the fact that he's later written by Moore to not be Alec Holland at all and entirely without a brain, but at this point in the character's history, he's not brain damaged. Such are the little mysteries in life of a comic book reader.
Posted by Thomm at Sunday, September 06, 2009