First a book, then a movie. Now a graphic novel. Yes, it's library book time again.

I never read Khaled Hosseini's book, nor did I see the movie. I did read about them, with the book fairing much better in popularity and reviews than the movie. Of course, it's typical of my interest field, being about a far away culture, one that's of importance to current US foreign policy. Too bad it was originally published in 2004. It would have been helpful if someone in the Bush administration had read it before the 2001 toppling of the Taliban.

So, here's how the story goes. Our protagonist is Amir, a Pashtun who's the son of a wealthy man living in Kabul. Amir's best friend is Hassan, the son of his father's servant. Hassan is Hazara. Kabul is majority Pashtun and tribal divisions are omnipresent in Afghanistan. Pashtuns are somewhat Nordic in appearance. Lots of fair hair and skin. Hazara are more Asiatic in appearance with 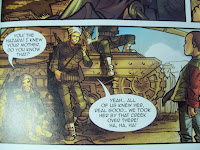 When the two are boys in the early '70s life is largely idyllic. Amir is a champion in kite competitions where the strings are embeded with glass and the goal is to cut the string of other 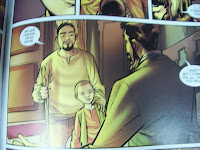 kite flyers and take the kite. Hassan is Amir's kite runner, the person who fetches downed kites that the winner wants to keep. There's a skill in being a kite runner because the kites fly high and can come down long and far away from where the competitors were standing.

This nirvana is lost, but not exactly as expected. Going into it I knew the toppling of the monarchy and the 1980 invasion of Afghanistan by the USSR would be life altering events. And 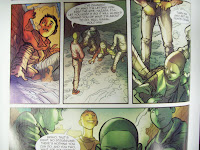 they are, but the event that drives a wedge between Amir and Hassan is a rape. A trio of bullies, older boys in their teens who are Pashtuns, constantly harrass Hassan for being Hazari and Amir for being friends with Hassan. After a champion kite event that Amir wins, Hassan is off fetching the kite of the runner up when he's cornered in an alley by the trio. The leader of the trio is not just a bully but a pedophile. With the assistance of his peers, he rapes Hassan. (He justifies the rape to his non-pedophile friends as being insignificant because Hazari aren't human.) Amir has found Hassan shortly before it happens, but is too scared to intervene. Amir makes like he came upon Hassan after the rape has happened and both act as though nothing has occurred.

Amir is wracked by guilt, which he turns on Hassan. He wants his father to make Hass 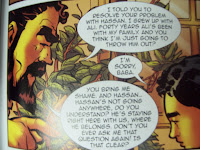 an and Hassan's father leave. Amir's father is very upset with Amir when he asks this. In part, his father is disappointed with Amir because he's not much like his father. His father is a physical presence, and a man of importance. Amir is bookish. Hassan defends Amir in fights, rather than Amir defending himself. Unbeknownst to Amir, his father has another reason to want Hassan and his father to remain, though. As Amir finds out many years later, Hassan is actually Amir's half brother. 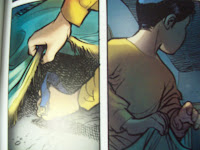 Amir's guilt is still more powerful than his father's anger. Amir sets up Hassan as having stolen Amir's watch. Hassan admits to this crime he did not commit and Amir's father forgives Hassan. Even so, Hassan's father, Ali, decides he cannot live with them any longer. He says life is impossible for them there, which I think means in light of the admitted theft, though it could equally mean the never ending harrassment by Pashtuns.

In 1980 Amir and his father flee Afghanistan ahead of the Soviet invasion. They go from Pakistan to California. Not much happens on that side of the Pacific. Amir goes to college, meets a nice (though not "pure") Pashtun girl who he marries, and becomes a writer.

Meanwhile, life is hell in Afghanistan. By the mid '90s the Taliban had taken over most of Afghanistan, with the exception of some northern provinces. Their control included Kabul. At some point after Amir and his father left, Hassan and his wife became caretakers of Amir's home in Kabul. Hassan had a son, about the same age Amir and Hassan were when the story started in the '70s. The boy's name is Sohrab. The Taliban kill his parents and he's sent to an orphanage.

In summer 2001 a friend of Amir's father calls from Pakistan to tell Amir that Hassan was Amir's half-brother, had a son, and was killed. By this point Amir's father has died of cancer. The friend wants Amir to come to Pakistan to then go to Afghanistan to get Sohrab from the orphanage. The friend implies that he knows that Amir knew about the attack on Hassan when they were boys and says this is a way for Amir to be good again. Amir goes to Pakistan, hires a guide to get him to Afghanistan, and sets out to rescue Sohrab. 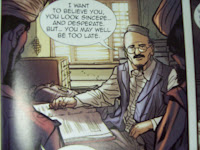 Unfortunately, the orphanage is periodically raided by pedophiles, who take a child to use as expected. Mostly it's girls taken but recently Sohrab was taken. The man who runs the orphanage is powerless to stop it, Amir's driver's anger notwithstanding. 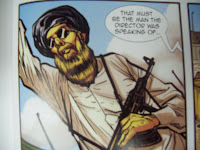 Amir goes to the man who has taken Sohrab. He's a man of some means with the Taliban. As it turns out, he's also the man who raped Hassan. He's now using Sohrab as his boy toy, dressing him as a girl and raping him. When 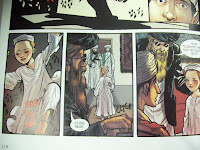 he reveals who he is to Amir, he proceeds to beat Amir mercilessly. It's only Sohrab hitting him in the eye with a projectile from a sling shot that allows Amir and Sohrab to escape. This is reminiscent of times when Amir and Hassan were boys and 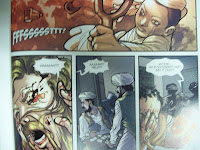 Hassan would protect Amir with his sling shot. Amir spends some time recouperating in Peshawar, then tries to get a visa to take Sohrab with him. 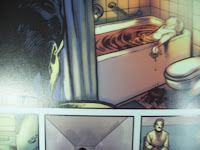 indicate that may be the only way to get Sohrab to the US. Sohrab is despondent and tries to kill himself by slitting his wrist in a bathtub. Meantime, Amir learns that he can take Sohrab directly to the US and then go through the procedures for Sohrab to stay. When he goes to tell Sohrab, he discovers Sohrab in the tub and manages to save him.

Once Sohrab recovers they go to the US. Amir stands up to his 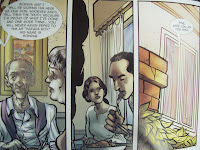 bigotted father-in-law when the man insults Sohrab for being Hazara, and the three, Amir, Sohrab, and Amir's wife, Soraya, live happily ever after.

The art for this adaptation of the book is provided by Fabio Celoni and Mirka Adolfo. It's a lovely style. It reminds me of Gabriel Ba and Fabio Moon's daytripper in many ways. It doesn't have the dreamy element to it, but the lines and the colors are similar. The art moves the story along very well and is often used in place of excess verbiage. From what Lee told me, that alone might be an improvement on the original story.

Still, the main issue with The Kite Runner is that its protagonist is largely detestable. Amir is a weak character. Physical w 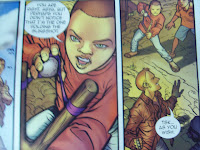 eakness is not the issue, though he has that, too. It's that he doesn't stand up for what he believes is right. He values his own safety over his best friend's physical and mental well being. That's excusable for a young boy looking at larger boys attacking his friend, but when he later frames his friend for a non-existent crime in order to assuage his own guilt, he moves past the excu 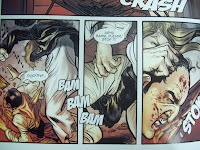 sable to the inexcusable.

Amir stays the same sort of person until he's in his 30's. Even when he goes to rescue Sohrab he makes no effort to stand up to the pedophile. He just allows the man to beat him without taking a single swing at him. It's only Sohrab's bravery, especially in the face of all the abuse that he suffered, that allows them to escape. Then he sets up Sohrab for a suicide attempt by telling him he'll never leave Sohrab in an orphanage, knowing full well he knows nothing about how to get the boy out of Pakistan. It's a stupid thing to say, regardless of trying to make the boy feel better. It's almost certain to lead to disappointment, and it does. 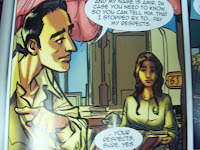 Even Soraya, Amir's wife, appears a stronger person, and she's hardly in the book. She ran away with a boy when she was 18, destroying her chances of marrying most upper class Pashtuns. Still, she realized it was a mistake, returned to her father, and is not ashamed of her actions. When Amir learns this, it's the first indication of likability in him, as he doesn't find fault with her for it, but it may well be that he's just not willing to find fault with her for something so much less objectionable than what he did to Hassan. It's not like he told her about Hassan, either.

So, I find myself with a likable book for what it has to say about Afghan culture. I doubt a pedophile could survive, let alone be a man of power, in Afghanistan under the Taliban. Oh, if he were a pedophile who favored girls, sure. That's standard for many of the tribes, including Pashtun. But a pedophile who favors boys? No, no. He's much more likely to be a beheading in the soccer stadium. It's not like it was overly secret. The inept Amir found him easily enough.

But on the other hand, I don't like the leading character at all. I'd much rather the story had been about Hassan and Sohrab. The tragedy of Hassan's rape and later death at the hands of the Taliban is a much more interesting, and sympathetic, story than Amir's story. The only sign of character devolopment in Amir is when he tells off his father-in-law. Amir's trip to Afghanistan is less about bravery than an attempt to redeem his o 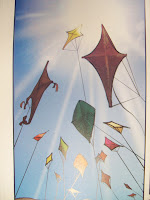 wn grievous wrongs inflicted on Hassan, which can't really be relieved now that Hassan is dead. Once Amir got out of Afghanistan, he doesn't seem to have suffered from guilt about Hassan until he received the call in Summer 2001.

Ironically, the setting of the story in Summer 2001 only made me think of how unnecessary Amir is. By the Fall the Taliban will be removed from power. Sohrab may have been saved by CIA and Northern Alliance forces. Sure, he wouldn't have been taken to the US, but given his actions when Amir needed rescuing, Sohrab appears resourceful enough to have survived and gotten out of Afghanistan.

It's a story worth reading, at least in illustrated form, but don't think you're going to come away liking Amir.
Posted by Thomm at Sunday, December 18, 2011