I’m really looking forward to some time off between Christmas and New Years because work has been extra busy lately (Praise God the big report deadline was met yesterday). Home life has been equally so with Christmas (excuse me – Holiday – no wait – WINTER) concerts three nights this past week and relatives visiting. Consequently, I’m trying to get a jump-start on my blog posts ahead of time – something I’ve been unable to do since October. I was out of state (GA and VA) for two weekends in November and taking day trips two other weekends (DC and Hershey). So, forgive me if I go a little lite the next few Saturdays. I’ve still got plenty to say, but it’s been difficult finding time to compose anything (which is why I’m skipping a chance to sleep in right now) and I want to relax and just catch up on my reading over vacation. Therefore, this week you get an abbreviated list of Recent Reads.

In no particular order… 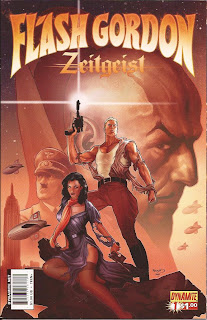 I’m a fan of the 1980 Flash Gordon movie (mainly because of the awesome Queen soundtrack) and the 1979 Filmation Saturday morning cartoon (the first 16-chapter season was awesome; the second season with a cutesy “kiddie” character was lame – again the music is a big part of the appeal). This issue basically depicts the opening scenes from the movie using some of the EXACT same dialogue. However, instead of being set in 1980 or even updated for 2011, this story occurs during the original time frame of the Flash Gordon comic strip – 1934. The interesting twist is that it also involves Adolf Hitler, since he was already in power in Germany at the time, and Ming wants to use him as his puppet ruler. The story will also be on a parallel track. While the three earthlings (Flash, Dale, and Zarkov) have adventures on Mongo, three new characters from Mongo (a hawk man, a lion man, and a golden bald girl) have adventures on Earth.

I like the concept and the art design. Alex Ross is once again co-plotting a Dynamite series (this time with writer Eric Trautmann) and providing thumbnails for the series artist, Daniel Indro. Indro’s finished art is very faithful to Ross’ sketches, but it seems overly heavy at times, especially the shading on the faces. This effect is compounded by the coloring, which makes the final product a bit muddy. I don’t know if this is intentional to make it more like an old time comic strip, but old comic strips had more simplified coloring (albeit beautiful colors like those seen in Prince Valiant). I know Mongo is red and it’s causing Earth’s skies to be red and everything is going to be tinged with red, but there is too much red!

With some of the art issues, I’m on the fence about whether or not I’m getting the next issue, but for a buck this one was certainly enjoyable. All the covers were magnificent too, although I liked the one by Paul Renauld the most. From the two-page concept sketches included in the back of the book, you can tell this is a project that Alex is really passionate about, which is always an encouraging sign (no phoning it in). It’s also rated Teen, instead of Mature, so I shouldn’t have my Warlord of Mars headlight issues with this series. 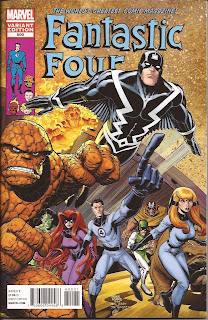 The slow pace of FF really killed my enthusiasm for this book. I dropped FF a few months ago and I didn’t think I missed anything for this story. Although, it hard to jump into a crisis and “feel” the full effect that has been building for months and months and months and… However, I loved Johnny’s comment about Pete’s horrendous Future Foundation costume. (Do you think the terrible design was intentional just for this joke?) The most important part of the issue was the satisfactory explanation about what happened to Johnny after he “seemed” to have died last year. Well, technically he did die – multiple times in the Negative Zone and was brought back to life by these weird worm creatures.

Over all the packaging was great – all new stories on quality paper – I think it was about 100 pages. I ended up getting the Adams variant for such a momentous milestone issue. Unfortunately, I’m just not that excited about what might happen next. I’d much rather read my John Byrne Fantastic Four Omnibus. I already know those stories are…well, FANTASTIC. 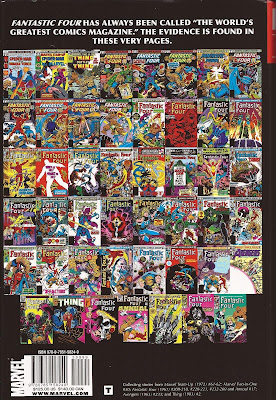 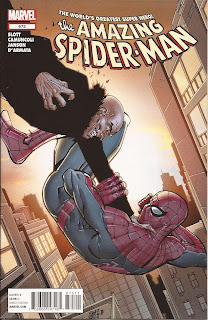 Hello, my name is Matthew and I survived Spider-Island. Boy, am I glad that’s over!

What pleases me most about this issue and the last one is that Carlie Cooper has NOT been written out of the series after all (like I rantily thought). She has a really unattractive haircut now (typical self-mutilation response when you’re mad at yourself) and is working with Spider-Man on a case, but at least she’s around and they’re doing some more talking about their relationship. Now that she knows MJ has always been aware of his secret identity too, she’s off to talk with her, which sets off Spidey’s Peter Parker sense! The Vulture scenes are pretty good too. He had been behind a gang of high-rise thieves and when he was upset with them, he dropped them to the pavement. He’s more ruthless than ever and his power has been amped up a lot.

The art by Giuseppe Camuncoli and Klaus Janson was not to my liking at all last issue. I said some not too nice things about it to my LCS storeowner, which I won’t repeat here. (If it hadn’t been for the fact that I DID just barely get through Spider-Island and wanting to reach the 700th issue milestone, I would have dropped it in an instant.) Mainly, because I didn’t mind it at all this time around. I think Slott’s pacing and story were better too. I’m really looking forward to the upcoming Daredevil crossover. 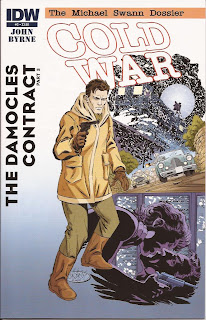 John Byrne has always been a fantastic (no pun intended) storyteller and this James Bond-ish series is great. Michael Swann managed to escape last issue’s fiery cliffhanger by jumping out of the car before it hit the tanker truck. He commandeers another racecar to pursue the killer and we get a wonderful high-speed chase in the middle of a quaint and quiet British town on a Sunday morning. Then we’re off to Russia with the would-be defectors to take a trip on the rails. There’s a beautiful full-page splash of the train in the snow. The only low point is a somewhat ridiculous “blind (not knowing who the person even is) encounter” (it’s a good thing her name wasn’t Lola!) -- still pure-Bond and tastefully done at least. And then we get the traditional gunfight and fist fight on top of the moving train with another cliffhanger – Swann falling off the top right when the train is over a large trestle. This is a very entertaining comic with an intriguing story and it’ll make a fine IDW trade one day too.

Swamp Thing continues to be EXCELLENT, but Action Comics #4 was a bit of a let down, but I think it was because I was too tired when I read it. Speaking of tired. That’s all for today. Maybe I can still catch another hour of sleep while my computer deals with the latest virus that’s infected it!
Posted by Matthew at Saturday, December 17, 2011