Lee: With the Avengers movie coming this summer there is a flood of Avengers stuff coming. It’s really incredible. Outside of that there are a couple of new series that should be good. All this means is that there is less cover silliness than usual.
Greg:  I came into comics at the height of the X-Men boom in the 90's. I seriously can't believe that the Avengers are driving Marvel's publishing line, let alone have a movie coming out. 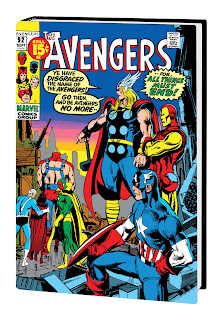 AVENGERS: KREE/SKRULL WAR HC
Written By Roy Thomas
Penciled By Sal Buscema, Neal Adams / John Buscema
Cover By Neal Adams
A conflict of star-spanning proportions -- with Earth caught in the crossfire! For those eternal intergalactic enemies, the merciless Kree and the shape-changing Skrulls, have gone to war, and our planet is situated on the front lines! Can Earth's Mightiest Heroes, the Avengers, bring about an end to the fighting before humanity becomes a casualty of war? And what good are even a dozen super-powered champions against the vast military machines of two of the great empires of the cosmos? The key to victory lies with the expatriate Kree Captain Mar-Vell and his human host, honorary Avenger Rick Jones! Featuring the trend-setting artwork of Neal Adams, the Kree/Skrull War is universally acknowledged as one of the finest and most important sagas in the Marvel canon. Collecting Avengers (1963) #89-97. 240 PGS./Rated T - $34.99
Lee: This is one of the best silverage stories of all time and it continues to be used as the basis for new stories to this day. Now they are presenting it in a nice oversized hc format and I wanted it sooo bad. That was until I realized I already had it in Masterworks and tpb. I want it but I can’t justify the same story in a third format. But, if you don’t already have it, then it’s really worth reading.
Greg:  Y'know, I've had this recommended to me plenty of times before, and Neal Adams aside, I've always been underwhelmed by it. I always found it worked far better as a wikipedia entry or a past piece of continuity than it actually did as a story. But I'm probably just having trouble with the age of the thing.

WINTER SOLDIER #1
Ed Brubaker (W) Butch Guice (A)
Cover By Lee Bermejo
Variant Cover By Gabriele Dell'otto
Sketch Variant By Lee Bermejo
Classic Artist Variant By Joe Kubert
• Winter Soldier and Black Widow are the super-spies of the Marvel U!
• Ex-Russian Sleeper Agents awaken, but under who's control?
• Is that Dr. Doom? Uh oh.
32 PGS./ $2.99
Lee: If anyone can make this interesting it’s Brubaker. I don’t believe we need yet another Cap’n America based book but I’m betting this will be very exciting.
Greg: Yeah, but its not just another Cap book. This one has a very distinct mission statement and character that is built on years worth of stories. Marvel has gotten a bit silly with their spin offs lately, but don't let that cloud your judgement, this is a spinoff that makes sense, both creatively and financially.

SCARLET SPIDER #2
Christopher Yost (W) Ryan Stegman (A/C)
• Spinning out of Spider-Island, a new era of web-walloping action continues!
• The new Scarlet Spider makes some new friends and deadly enemies on the streets of Houston!
32 PGS./ $2.99
Lee: WHOA Is that what I think it is hanging out? Oh yeah, it’s just an oddly place chunk of stone. No worries.
Greg: Y'know, I hate the clone saga. It was one of the first comics I actively disliked. Kaine has always been a stupid character with a stupid costume, but this looks pretty good. The premise interests me (villain who has spent his whole life dying is suddenly ok and now has to figure out how to live with that), the previews have been good, and Stegman's art looks like the next big thing. I can't believe I'm looking forward to picking this up.

THE TWELVE #9 and #10 (OF 12)
J. Michael Straczynski (W) Chris Weston (A)
Cover By Paolo Rivera
• The Time-Stranded Heroes Of World War Ii Are Back!
• One Member Of The Twelve Will Fall!
• Who's Behind The Myterious Killings? The Answer Is Electrifying!
32 PGS./ $2.99
Lee: Two issues in the same month???? It’s a minor miracle. I really enjoyed this back when it started so I’m excited about seeing this again. This time I wait for the trade too see if the story actually ends.
Greg:  I LITERALLY can't remember what this book was about. I'm going to go with Watchmen rip off because that describes literally 50% of JMS' career.

TORSO GN-HC
Written By Brian Michael Bendis / Marc Andreyko
Penciled By Brian Michael Bendis
Cover By Brian Michael Bendis
The gripping tale of Eliot Ness' chase of America's first serial killer: the mysterious torso killer! This 1999 Eisner Award-winner for Comic Book Excellence is completely reformatted, and perfect for both new readers and old! Collecting Torso #1-6.
280 PGS./ $24.99
Lee: I read the Image trade of this long, long ago and remember liking it a lot. I wonder how this holds up over time. When it first appeared, Bendis’ talking head style of writing was new and different. Now that I’ve been reading Bendis for 10 years I wonder if the story will still be as good.
Greg: Some of the stuff that seemed revolutionary back then will seem tired now, but this still holds up. One of the best Bendis books and crime comics you'll ever read.

SUPERIOR PREMIERE HC
Written By Mark Millar
Penciled / Cover By Leinil Yu
Simon Pooni had it all going for him -- plenty of friends at school and good looks, and his coach called him one of the most talented basketball players he's ever seen. But that was when he could still move his legs. Now, he's living with multiple sclerosis, missing all the little things he used to take for granted, and escaping into the world of movies and comics with his best friend. Then- Superior entered his life. It's the newest smash super-hero comic from Mark Millar and Secret Invasion artist Leinil Francis Yu! Collecting Superior #1-7.
192 PGS./ $24.99
Lee: Millar’s last Marvel book, Nemesis, was messed up and pretty depraved…even for Millar. But, my LCS has said this is better and less… shock for shock’s sake. I might have to give this a try.
Greg:  This has been the best thing Millar has written in ages. It actually feels like it has a heart. Of course I haven't read the last issue yet, so I'm sure Millar ends this with the main character getting gang raped by a pack of wild dogs, y'know, for lulz.

Lee: Kind of a light month from Marvel.  There are lots of books but nothing that was really different from all the books last month. Luckily Winter Soldier looks awesome otherwise it would be depressing.
Greg: Excited for Winter Solider and Scarlet Spider! Spin offs HOOOOOOO!
Posted by Lee at Tuesday, December 20, 2011