So no week in review I’m off to Florida and hope to be able to deliver news about my first grandchild very soon, it is odd moving to that stage especially at 35 years old (in my mind). Anyway I’m typing this on Thursday night and had a book that was worth some space and it from last week, so the week in review is the book of the week in review.
The book in question is Batman Incorporated Leviathan Strikes One Shot by Grant Morrison writer and Cameron Stewart on Chapter One and Chris Burnham on Chapter Two. When I read the story was being continued I was concerned that it would not work in the new DCU and apparently all agreed as this book is set before Flashpoint and the new DCU. 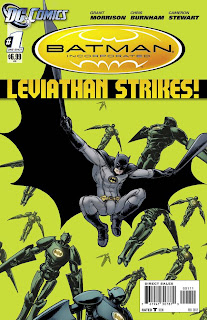 The first chapter is about Stephanie Brown at the English finishing school. It is a great adventure of Stephanie finding out that this school is a training ground for young girls being turned into super villains escorts or even more if they are especially skilled. Batman assists in bringing down the school and Cameron Stewart provided the art. On one hand not sure how this was central to the Leviathan story on the other hand I loved Batgirl again. This is why bringing back Barbara Gordon is not working for me. I was enjoying seeing Stephanie become a hero in her own right and watching Batman help her move up in class and status as a hero was great. It didn’t hurt to have an artist of Stewart’s caliber provide the action and at times the school gave off a Morning Glories vibe, except in one issue Grant gave us more of a story then Spencer has in 14 issues or more of Morning Glories.
The second half of the story kicks everything into high gear. First off Chris Burnham is one hell of an artist, part Frank Quietly and part Seth Fisher and all Chris Burnham. His work has wonderful layouts, tons of details and he can do bizarre as well as straight forward a perfect artist to match Grant’s script. This script was pure Grant Morrison and crammed full of so much story that is must have been four of five issues of plot all crammed into about 25 pages. We have Oracle in a new configuration, Bat Robots, El Gaucho, Batwing, Dick Grayson Batman, Red Robin, Robin, The Hood, Nightrunner, Netz (the bad guy), the fate of Jezebel Jet in a madcap adventure that ends with death and destruction and a final reveal of who is Leviathan. That reveal was just great as Talia is behind it all. I love it when she said give or take four letters she practically signed her masterpiece. Better yet it is to be continued in 2012. It is Robin’s Mom versus his Dad in a chess match like no other.
The bad news is this book made me miss just how great the Batman stuff was before the jump. I’m now miffed again that Green Lantern was untouched and they felt the need to radically shift Batman backwards to a younger version. Scott Snyder’s Batman story would have been just as good with a slightly older Bruce Wayne and I bet he could have made it work with Dick Grayson. I miss the older and wiser Bruce Wayne, the older Dick Grayson learning to be his own Batman, Tim Drake as Red Robin establishing his own identity. We also were given a very cool Oracle and growth in the character of Stephanie Brown as Batgirl. Hopefully these versions all get to continue forward in the series that restarts next year.
Comparing the prior Batman line to the new DCU, except for Scott Snyder’s Batman and the Batman and Robin series by Tomasi and Gleason it falls short against the old Batman line up. Of course the same creators are still doing great work but with characters that have been pushed a few steps backwards in some ways. Dick really had become Batman and Damian was becoming better under Dick’s tutelage. This book just exposed all the potential of what Grant had in mind and DC made a mistake going a different direction. A Batman universe with Grant, Scott and Peter would have been fantastic and Batman new world is poorer for the absence of all of Grant’s mind blowing ideas and plots.
Anyway this was a great book and well worth your time and effort to read it. If you missed any of Batman Inc. before the backup material fills in the details.
Next week’s list is All Star Western, American Vampire, Aquaman, Batman Dark Knight, Blackhawks, Chase TP, DMZ, Flash, New Guardians, I Vampire, Justice League Dark, Spaceman, Superman, Lois Lane Archives, Teen Titans, Unwritten, Voodoo, Captain America (#5 & #6 - two issues – Marvel is insane), Captain America and Bucky, FF, Secret Avengers, Ultimates, Uncanny X-Men, Witch Doctor, The Cape and Warlord of Mars.
Next week’s column should be a year end post and hopefully I can pull that off as I run around in Florida hoping for a grandchild to be born and having Christmas, house hunting and more.
Posted by Jim at Monday, December 26, 2011