So I have just gone crazy and have decided to have more fun with various posts. Our old format was to group all sorts of smaller companies together for preview reviews, but for right now I decide to spotlight a company and add some commentary some of their offerings.

I have a mixed opinion of Dynamite Comics; on one hand I enjoy a few of their offerings. On the other they often seem to push the envelope with what is or what is not public domain. I’m not sure what is how the whole public domain thing works, but heck I can download a ton of older material like Tarzan books for free, so I guess it is all fair game. Often it feels like the easy way out and a chance to exploit older stuff and to not have to pay anybody, but the whole creator rights debate is very convoluted with older stuff. 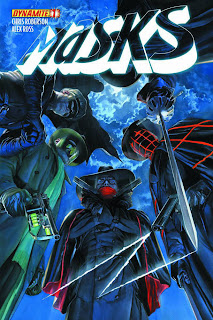 MASKS #1
Written by Chris Roberson, art by Alex Ross, covers by Alex Ross, Jae Lee, Francesco Francavilla, Ardian Syaf
Before superheroes, there were Masks! The Shadow, the Green Hornet, Kato, the Spider and more in a story that only Dynamite could tell! For the first time ever, these masked vigilantes are joining together in on EPIC series! It's 1938, and the Justice Party has swept into office in New York State. But the newly-elected officials are in the control of powerful criminals, who quickly corrupt the law to their own advantage. When a fascist police state is instituted, the only ones who stand in defense of the innocent are masked vigilantes like the Shadow, the Green Hornet, Kato, and the Spider. As the confrontation builds, more masked heroes will join the fight including Black Bat, Miss Fury, Black Terror, Green Lama and many more! When the law is unjust, justice must be an outlaw! 32 pages, $3.99.
Jim: See this book is one that I will try. It is written by Chris Roberson whose work I enjoy. Also it has art by Alex Ross so it should be a good looking book. In some ways I’m wondering how well this book will work as I have never seen this type of work from Chris and Alex usually works better with a straight super hero type book. Will this noir team up thing work for these guys? I’m willing to try one issue at least. Plea to Dynamite, please stop with the endless variant covers, it makes you seem cheap and just pandering to the old style collection mentality. 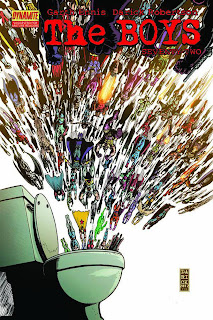 THE BOYS #72
Written by Garth Ennis, art and cover by Darick Robertson.
The final issue! The long day closes on the Brooklyn Bridge, as our hero finally meets his destiny. There's one last deal to be done, As Stillwell finds out the real cost of doing business, and one last surprise for Rayner too -- as she begins her long-dreamed of political career. The Boys' story comes to an end in this final issue containing 24 pages of story! Contains 5 pin-up pages of brand-new art as well as a complete cover gallery! 40 pages, $4.99.
Jim: I dropped off this series a long time ago. I’m curious to read and hear what others thought of the series because now is a perfect time to go back and start to pick up the trades and read the entire saga in a short time frame. 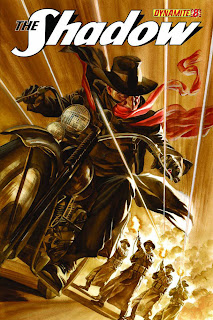 THE SHADOW #8
Written by Victor Gischler, art by Aaron Campbell covers by Alex Ross, Mike Mayhew,  Tim Bradsteet, Francesco Francavilla.
REVOLUTIONARY: Part 1 (of 4)--The Shadow traveled to Nepal to investigate a strange glitch in his mystic powers. He left with only partial answers. Now The Shadow and Miles Crofton, his pilot and sidekick, pause in Paris to take on some gun runners who are smuggling weapons bound for Spain. But a dark-eyed Spanish beauty named Esmeralda complicates matters when Cranston is unable to determine her intentions. The Shadow finds himself smack dab in the middle of the Spanish Civil War as he juggles the fate of a single solider who might help shape the future of humanity.32 pages, $3.99.
Jim: Not sure how I feel about Garth only being on the book for the first arc, I was hoping to see his take on the character for a lot longer. At the same time as I have been reading this series I have been reading the old Shadow series from DC by Andy Hefler bit by bit. It is an interesting dynamic reading two totally different takes on a character at the same time. 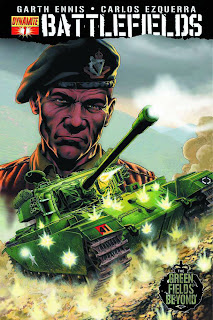 GARTH ENNIS' BATTLEFIELDS #1: THE GREEN FIELDS BEYOND PART 1
Written by Garth Ennis, art by Carlos Ezquerra, cover by Garry Leach
On the killing fields of Korea the Tankies find themselves back up the sharp end, as veteran Sergeant Stiles is finally given a tank that can take on any opposition. Unfortunately, the Chinese spring offensive of 1951 is on its way- leaving our heroes cut off, on their own and outnumbered ten to one. It's British steel against massed Communist hordes, as the last Battlefields series begins with a bang.32 pages, $3.99.
Jim: I will read any war story that Garth wants to write. Almost every story has been a gem and some have been absolutely brilliant. His stories are tough and hard, but have a reality to them that you seldom find in war stories.
JENNIFER BLOOD #21
Written by Al Ewing, art by Kewber Baal, cover by Mike Mayhew.
It had to happen! The trial of Jennifer Blood begins here, as the terrible events that tore apart the town of Revere are laid before the court - and it doesn't look good for Jen! And speaking of things that had to happen - the Ninjettes are back! And this time they're competent! 32 pages, $3.99.

JENNIFER BLOOD: FIRST BLOOD #3
Written by Mike Carroll, art by Igor Vitorino, cover by Mike Mayhew.
Jennifer Fellows' life is pretty full... Cooking, cleaning, shopping, helping the kids with their homework, plotting blood-soaked revenge on her murderous uncles. But to get to the Blutes, she has to first get past their enforcer Wendell Cortland. When Jen's surveillance of Cortland uncovers a brutal and seemingly pointless act - an act that he is clearly hiding from the Blutes -- Jen realizes that Cortland's secrets could ruin everything for her. Or, maybe, they could be exactly what she needs...   32 pages, $3.99.
Jim: I lump these together because Jennifer Blood was a six issue mini-series by Garth Ennis and I think he told a decent story about her and the concept to me was a limited one. Now it is taking a cool idea and trying to make it into more than it is. I’m judging without reading, but even the solicitations sound like a concept that is played out. It is the syndrome of trying to drag every last ounce of success out of something until you kill it, the proverbial beating a dead horse as a business plan. 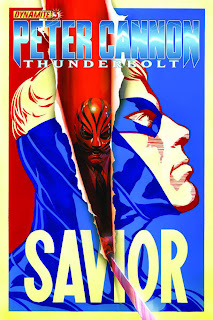 PETER CANNON: THUNDERBOLT #3
Written by Steve Darnall, Alex Ross, art by Jonathan Lau, covers by Alex Ross, Jae Lee, Ardian Syaf, Stephen Segovia.
The plots thicken in "Discovering Japan," as Thunderbolt meets his abductor -- the deadly Master Tiger -- and is forced to fight for his life. Meanwhile, men in high places are planning to destroy the peace that Peter Cannon has created... and an old enemy prepares to make his entrance. 32 pages, $3.99.
Jim: Not sure how DC lost the rights to this character, but given how DC has an Ozymandias mini-series going on at the same time, it is amusing to see a also ran Charlton character get two companies to give him a high profile. I was never a fan of Peter Cannon during any of the DC books he was in and never read the Charlton versions. Regardless I’m curious to check this book out. The first issue is due very soon.

Jim: I tried to like some of these books, but Vamperilla and Pantha were garbage. Again it is the company trying to leverage “franchises” as far as they can and just preying on fans who like the characters.

THUN'DA #4
Written by Robert Place Napton, art by Cliff Richards, cover by Jae Lee.
The little peace Roger Drum has found among the peaceful Shareen is shattered when the feared Monkey Men invade the valley. Drum comes face to face with the speaking primates who are known for their ruthless savagery and insatiable blood lust! Also reprints an original Thun'da story by Frank Frazetta! 32 pages, $3.99.
Jim: I read issue #1 and it was a nice little updating of the origin of Thun’Da by Frazetta from years ago. It is not a strong book, but the first issue was entertaining and contained a reprint of the first story of the original Thun’Da. 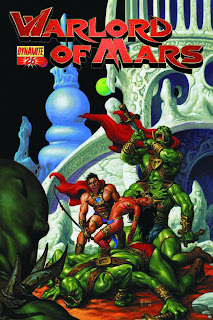 WARLORD OF MARS #26
Written by Arvid Nelson, art by Leandro Oliveira, covers by Joe Jusko, Lucio Parrillo.
John Carter might be the brand-new Warlord of Mars, but his honeymoon’s gonna be real short. The savage green Martians start running amok the moment he ascends the throne, threatening to smash the fragile peace he has fought so hard to win. What's behind the uptick in violence? Only John Carter and his old pal Tars Tarkas can find the truth. Warlord of Mars #26 is the first installment of the thrilling Savages of Mars story arc. John Carter's exploits on the Red Planet are just beginning! 32 pages, $3.99.
Jim: I’m a diehard fan of John Carter, but even I got tired of all the other books they added on. A lot of it was pure garbage, again trying (and succeeding with me at times) to get fans of the characters to buy any story with a character they love in it. I have dropped down to just the base book now and happily saving $4 on whatever they were producing. 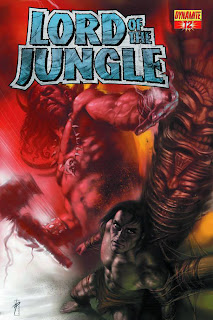 LORD OF THE JUNGLE #12
Written by Arvid Nelson, art by Roberto Castro, cover by Lucio Parrillo.
At long last, the Lord of the Jungle finds the fabled treasure-city of Opar. Unfortunately for him, his arch-nemesis Nicholas Rokoff arrives at the exact same time. But a little surprise is in store for both men -- turns out Opar isn't exactly a ghost town, and the locals aren't too keen on outsiders! Hot jungle babes, savage beasts, and a mountain of gold await the ape-man in Lord of the Jungle #12: The Treasure Vaults of Opar! 32 pages, $3.99.
Jim: I read the first few issues and why it is not horrible I have the Joe Kubert run as hard cover collection from Dark Horse. Also I have ordered the Artist Edition of some of Joe’s Tarzan work by IDW. Finally I’m re-reading the original books. This work does not hold a candle to the Kubert material, but it did inspire me to go back to the source and read the first Tarzan novel by Edgar Rice Burroughs.
So that puts a wrap on my review of the Dynamite offerings. The company provides some entertaining books and has a fair amount of decent talent doing work for them. At the same time they seem to hack out a bunch of crap and doing endless amounts of variant covers. A true mixed bag and with the base price being $4 for a book, they often provide not enough bang for the buck.
Posted by Jim at Thursday, August 23, 2012