Week of August 22 in Review

As always I’m playing around with my format. As much as possible I’m trying to write my capsule reviews and/or impressions of certain titles shortly after I read the book. Hopefully it gives my view more of an immediate impact. Often over time my opinion can change on a book or the visceral rush goes away and I have more of a dispassionate view of a work. Anyway that is this week’s thought process. Then I want to add some comment to every book I got that come out last week, so at least every book gets some mention. 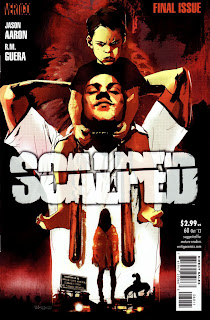 Scalped #60 brings to a close the story of Dash Bad Horse. The issue itself was full of the raw emotional content that was a hallmark of the series and instead of a “Warren Ellis” ending we got two men who are left with vastly different lives then the ones they had been living. This series deserves a deluxe hard cover format reprinting and hopefully it will be spread over two or three volumes. It has to go down as one of the best series ever done and the fact that the story had an ending made it even stronger. The story often went exactly where you thought it would go and that makes sense or else the characters would not have been true to themselves. The story also went to unexpected places and again that is the nature of life. Jason Aaron with RM Guera as the main artist produced a story that should stand the test of time.

Before Watchmen Dr. Manhattan #1 by JMS and Adam Hughes was a bit of a disappointment. So far all the series have been very good or great and this one was just okay. Adam Hughes is one of the great good girl artists of our time and the script almost never allowed Adam a chance to show his stuff. Otherwise his interiors were very good, but not as great as his covers. I think Adam may have been too long away from the party and interiors are not his thing anymore. The script itself was playing with the quantum theory of the universe and Dr. Manhattan’s ability to play within it. It had some interesting moments, but compared to the other series this one has started out a little slow. Of course my expectations were high and that always makes it harder for a book to succeed. 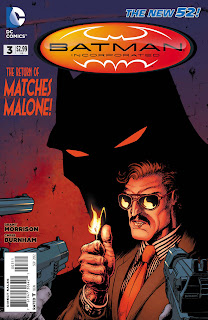 Batman Inc. #3 by Grant Morrison and Chris Burnham is pure genius. This is Grant at his best with an artist who is a rising star, heck he is a star in my mind already. The way Morrison set out how Leviathan has infiltrated Gotham was just magnificent. The return of Matches Malone was also a master stroke. Grant is using all that he has built before and taking the concept even further. His use of Bruce, Damian, Dick and Alfred is perfect. Batman has brought out the best in Grant and even the DCU hitting the re-set in the middle of it has hardly caused a ripple in his story. In some ways it has been ignored and in others he has made the changes needed to keep his editors at least semi-content. Talia’s organization is right now outsmarting Batman. Damian adopts a Redbird identity to play by the rules that Robin is dead, but he is not about to be benched in this battle of his parents. This is a truly fantastic series and the best Batman book on the stands, beating out even Scott Snyder’s work. 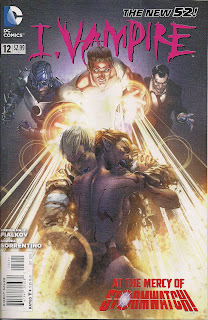 I,Vampire #12 by Joshua Hale Fialkov and Andrea Sorrentio is the one reason I’m happy about the new DCU. This book has been nothing short of a revelation. Fialkov continues to move the plot forward at light speed, integrate the book within the DCU and build characterization. Andrea’s work is moody and has grown from reminding me of Jae Lee to being more and more of Sorrentio’s own unique style. This issue the Vampire Zombie war is visited by Stormwatch. Everything is going tits up when Andrew tries a trick that changes the entire playing field. If you are not reading this series you are missing out on what has to be the best new series coming out of the new DCU. I’m just constantly amazed how well Joshua has managed to incorporate Batman, Justice League Dark and now Stormwatch into the flow of the series. Also where other series have taken a year to barely tell one story Joshua has told at least three different stories as he continues to build a rich overall history of Andrew Bennett.

Rachel Rising #10 by Terry Moore is always a favorite and now that the mystery of why Rachael came back from the dead has been revealed the book has taken on a new dimension. At first I thought this was just an odd book where some poor girl had come back from the dead and this issue we find out she was a witch in a former life. Rachel now seems more than willing to help make the town of Mason pay for their past sins.

John Layman with John McCrea are making a mockery out of Mars Attacks as well they should. With Mars Attacks #3 their tongue in cheek work is hitting new heights. I’m not sure anyone other than John Layman could make this type of book work so well. It is about Mars attacking Earth and basically killing everyone and causing great death and destruction. Yet it is just out and out fun. John McCrea made Hitman work and he is making this book work also. He is a great artist, who is sorely underappreciated. This issue giant bugs and a man with a flea circus gets his revenge against the invaders. 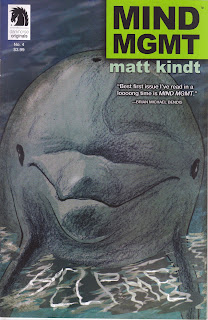 Mind Mgmt #4 by Matt Kindt was another great issue in what is already a great series. In this issue we are learn more about Mind Mgmt. Meru has finally found Harry Lyme and Harry tells her of his being recruited by Mind Mgmt and some of the work that he has done. We learn that one group of Mind Mgmt agents are the Immortals. These are people who have learned how to heal injuries of almost any type with their mind. Harry was a major operative who was used to smooth over everything from getting countries to agree to oil pipelines to helping to make a populace happy to see American troops come into Iraq. Harry also was in love with one of his teachers and over time she consented to marry him. Eventually Harry started to realize that he may have made this happen. This caused Harry to wonder what was real in his life. This book is  great and you could read this book multiple times and continue to pick up new layers of what is going on. Matt has obviously written a huge back story about Mind Mgmt and with each issue this series gets better and better. This is a true gem and one of 2012’s best new series.

For the record Justice League Dark #12, Secret Avengers #30, Fables #120, Cobra #16, Planetoid #3, Invincible #94 and All Star Western #12 were all good books this week. Each book provided solid stories and anywhere from good to very good art. Not every book will get a capsule review. Super Crooks #4 (of 4) was typical Millar and entertaining, Lobster Johnson The Prayer of Neferu was a decent one shot with art that I thought was weak. On the other hand America’s Got Powers #3 is being canned with this issue for me. The story is not compelling even with great art.

In total it was a good week for comics. Of course with winnowing my list it ensures that most of what I get is already a book that I favor.
Posted by Jim at Monday, August 27, 2012