Bone: Out from Boneville - TPB 1

Reaching back a bit, here, as this work was originally published in 1991 and 1992.  It hasn't lost anything in entertainment value in the last 20 years, either. 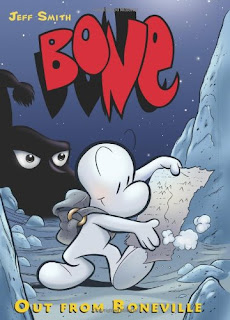 But first, a little history.  I remember seeing Bone in my LCS back in those early 90s days.  I never picked up an issue but read much good word about Jeff Smith's work.  I'm not even sure I was aware that it was an all ages book, actually, just that it was good work.

So here's what it's about.  Fone Bone is the hero.  He and Phoney Bone and Smiley Bone have been run out of Boneville because of a scam Phoney Bone was running.  Phoney Bone complains a lot and has no consideration for anyone but himself.  Smiley befits his name and is a happy-go-lucky sort.  Fone is a naif.  Making their way across a wasteland they're separated by a swarm of locusts.  All three wind up in a never before seen valley inhabited by humans, communistic rat-things, and intelligent animals and insects.  Much of the story follows Fone Bone, from his winter spent with some critters to his meeting of the beautiful Thorn, with whom he immediately falls in love.

Phoney eventually arrives, offending all the way, and is given a good beating by Gran'ma, the cow racing grandmother of Thorn, and a very tough customer.  Shortly after the rat-things attack en masse, searching for Phoney at the command of a dud who looks like the Grim Reaper.  He's just the Hooded One here and no telling what it is he can do, other than commanding the rat-things.

A red dragon saves Fone more than a few times.  No telling what his motivation is at this point, but he was there the first time Fone stumbled into the valley and protects him from the rat-things.

It's not until the book, which consists of 6 chapters, is nearly finished that Smiley and Fone get back together.  By this point Phoney has learned that sad truth that there's no money in this society.  Everything is traded on a barter system.  After consuming quite a bit to drink at a bar, Phone is now paying for it with dish washing.

This is a book with lots of adventure and humor.  It's a sort of humor that will appeal to both kids and adults.  It has some hints of adult themes, such as Fone and Thorn skinny dipping together, off panel, but it's played for humor and not titillation.  It's a great bridge between the goodly number of comics aimed at young kids and the superhero fare aimed at teens and older.  I'm looking forward to more.  Handy that the entire run is done, so I don't have to wait around for new trades to come out.
Posted by Thomm at Thursday, August 01, 2013