I wonder if I still remember how to do this…

Well I’ve still got some books left to read from the huge stack that accumulated while I was on vacation for three weeks.  And I’ve got the itch to compose a few posts on things I read during my travels, but who knows if I’ll get to them in time or not.  Y’know…before I lose the urge.  Perhaps you’re wondering why I’m not writing one of those right now – the thing is the newer material generates more views and if you can get someone to try out a new title (or an old one again), that’s a pretty worthwhile endeavor.  I certainly have read a lot of good comics recently, but I wanted to showcase the surprise of the week:  Indestructible Hulk #011!

Except for the Simonson drawn issues, this book has been on pull list life support since almost the beginning and it’s already died for Jim.  “Hulk thought Jim was friend.” But I’m here to tell you that Mark “gotta-trust-him” Waid took the title in a promising direction and I really thought it was cool.  The kicker is that it’s all because of the Age of Ultron. 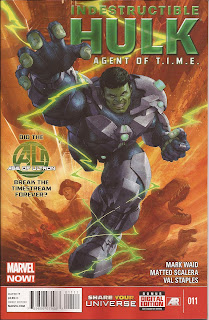 If you haven’t been reading Hulk lately, he now works for S.H.I.E.L.D (because he does in the Marvel movies).  Maria Hill gives Banner a private lab to develop all kinds of worthwhile things for humanity lickety-split (since all super-genius’ work really really fast) and when necessary she sends the Hulk out on assignments to tear things up.  She really likes to tick Bruce off to trigger the transformation too.  During the Daredevil cross-over last month, we learned that Bruce has left some “dirt” with Matt Murdock, in case anything terminally bad happens to him or his alter-ego. One thing that’s been troubling me with the series is the Hulk’s erratic behavior.  He’s not a consistent “personality or anything – you never know how he’s going to act (mindless, raging, mean, etc.).  Okay, so you’re all up-to-date and ready for the latest story: Agent of T.I.M.E. SPOILERS Follow.

If you read Age of Ultron, you know the time stream has been broken due to overuse by our favorite heroes.  Now we’re getting random vanishings and reappearances of things.  So, if you thought A.o.U.  was really going to mess things up stability-wise, you were right!  So S.H.I.E.L.D sent an agent in to investigate using a tachyon-powered two-way radio created by Banner.  The guy is nearly overwhelmed with the madness of it all and things start to go south for him fast.  When they pull his twisted corpse back through the portal different parts of his body have been aged or de-aged (90 years to six weeks).

Meanwhile the Hulk is on a mission against the Society of Serpents (seen elsewhere in Waid’s DD book) and encounters one of the time anomalies himself (a 75-year old military plane in perfect condition with the skeletal remains of the pilots).  Afterwards Hill explains to Banner that these seemingly random occurrences have “one factor that ties them all together.”  She takes Bruce down to the ultra-secret sub-level, which houses T.I.M.E. (Temporal Irregularity Management and Eradication).  Some of his lab co-workers are already involved.  Then he meets the common thread: Prisoner Z (a fat guy in a green suit) “Hulk not understand, fat-man not have six-arms.” – And the book goes from ho-hum to really interesting.

It’s Zarko, The Tomorrow Man from the 23rd century (not Roddenberry’s version).  He’s an old-time foe of Thor from way back in Journey into Mystery #86 (Nov 1962) or 12-years ago in the current MU.  This is an example of why Marvel super-hero comics can still be exciting even amidst continuity changes and recycled storylines.  I love to see the return of an obscure character!  It makes me want to read back issues (or buy hardcover collections).  This one has been on ice for twenty years and I’m not talking about just his publishing history (circa 1991 or The Mighty Thor #439) – he’s actually been in S.H.I.E.L.D custody for that long (in the story).  And he’s been making dire predictions of a future time line deterioration, which is now happening.  This is why we can have the awesome All-New (out-of-time) X-Men.  He explains that the Chronarchists are now “powerful enough to reknit history to their whims”.

“There’s only one being strong enough, tough enough, to survive time travel at this moment…We need the Hulk.”  Banner laughs in his face saying it would be like the “ultimate bull blunder through the ultimate china shop.”  He suggests calling in Red She-Hulk instead.  Only Hill doesn’t know who she is.  When Banner tries to stammer out her name himself, Zarko has to finish it for him.  Matteo has really given Zarko a palpable creepy vibe – I love it!  The Tomorrow Man asks Banner if he’s noticed the Hulk’s unstable personality lately.  Let’s listen in on the conversation:

Banner: “That depends on ME.  How the Gamma Radiation interacts with natural fluctuations in an aging adults (see Marvel heroes can actually grow facial stubble!) biochemistry.  Also the circumstances of each transformation.  The exact stresses involved.  All those are factors that determine nowadays “which Hulk emerges.”

Zarko: “If only that were true, doctor.  Why does the Hulk himself fluctuate now?  Because the Chronarchists, doctor.  They’re wilding through broken-time (Zero-Hour anyone?).  Eliminating certain events (Please, please restore Gwen Stacy’s virginity!).  Remolding others.  Hulk is unstable because they’re fiddling with his history.  They may alter Hulk’s origin.  They may tweak it (Joe Quesada is a Chronarchist!).  Ultimately, they may eliminate it.  But unless they’re stopped, it will affect him… and you…Just as it’s already affecting those close to you…like “Buh-buh-Betty”.

Banner: (after a short resigned pause) “I’m in.

What a great way to exploit the cross-over event and explain the obviously now planned inconsistencies in the series to date.  I love reveals and this one was a doozy that I had no clue was even coming.

So Zarko outfits Bruce in a suit of his design and they’ve backed up a version of Bruce’s brain, which has read up on Zarko’s vast data, into one of those Bots the Hulk has been frequently breaking.  So, the Hulk, who must remain the Hulk, will be accompanied by a Robot (floating head that looks like Machine Man a bit) version of Bruce.  So, the two can interact together in almost real-time. (You’ll just have to read the book to get that explanation.)  When Banner asks what will happen if the Hulk changes to Banner side-by-side with the robot version of himself, Zarko sinisterly replies “Nothing Good.”  That smile on his face!  He’s up to no good for sure, not a surprise, but I can’t wait to see him betray the effort eventually.

The first stop…1873 and Marvel’s western heroes, who are running from a green dinosaur (the first wave of the creatures from the really nifty Pacific Rim film). Awesome!  Jim left one-issue too soon!  “Hulk misses Jim – always liked his afro.”

GRADE A-: In half of one issue, Waid has turned this book around completely for me.  I’m super excited about this series now!  Maybe there isn’t anything “new under the sun” for mainstream super-hero comics, but when writers work within the “system” to create these kinds of cool twists and turns – don’t miss out!
Posted by Matthew at Saturday, August 03, 2013